Having spoken with Richard Smith and Dan during the week and being totally dissatisfied with the photos I managed on my first visit the three of us plus the young "Twitchmeister" headed back up to Blorenge on Saturday afternoon in the hope of better views and some much better photographs for myself.
We had all seen the bird and Richard had already managed some superb images on a couple of previous visits during the week and being "in the know" advised that mid-afternoon appeared a good time with the bird showing much better and giving closer views once the crowd of visiting birders had thinned out.
We arrived at about 2.30pm and would have arrived sooner if Richard hadn't taken us on the scenic route via Govilon although I have to admit that the views from the more easterly approach were stunning !
The bird had been showing about 10 mins before our arrival but such was our luck that it decided to keep it's head down for a further 45 mins or so before putting in another appearance.
It showed at various distances whilst doing it's circuit but didn't come close enough to get a good photo.
As the afternoon wore on birders left and the numbers dwindled until there were only a handful of us left,true to form and exactly as Richard had suggested the bird started to perform really well and eventually came close enough to get what I hoped were some really good shots.
Myself and Richard let loose with the 7Ds and both Dan and Gethin got "crippling" views. 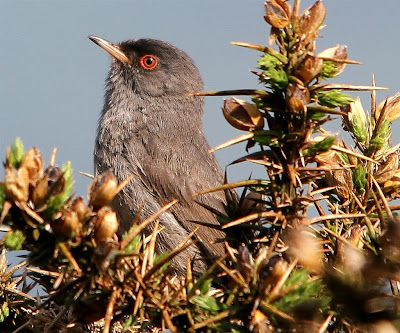 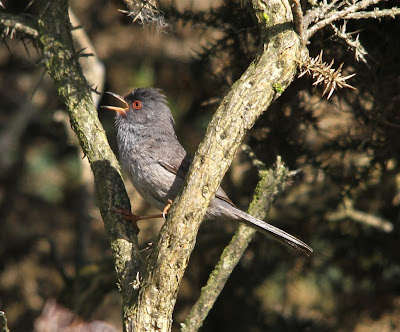 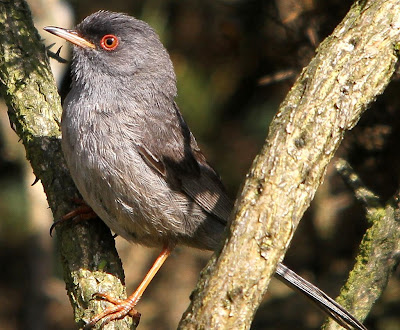 It scuttled about in a spindly gorse bush at the side of the road and with the sun behind us and fully on the bird it gave great views.

It disappeared again for a while before reappearing on the other side of the road but this time sillouetted in bright light which made life a little difficult,I ended up overexposing a little too much but Richard excellent photographer that he is shifted position to get some greenary behind the bird,must remember that handy tip next time. 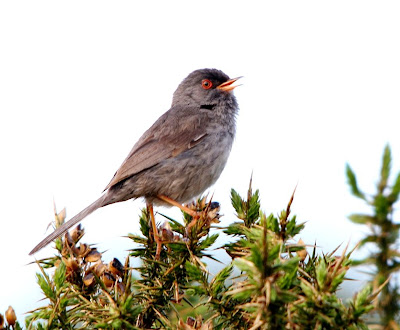 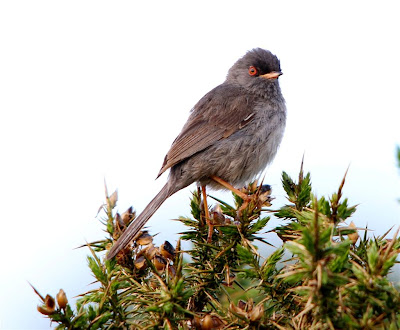 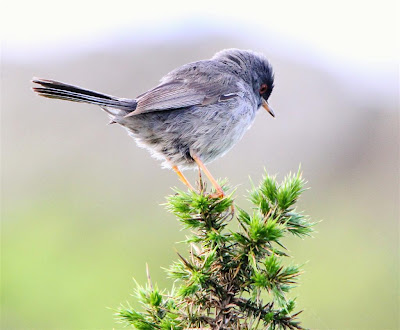 We had experienced great views,I had got the photos I wanted,Richard had added to his already vast catalogue of images of the bird and both Dan and Geth had got brilliant views,"everyone a winner" and we headed home a happy bunch (although this time we took the shorter route via Blaenavon !!)

Following the disappointment of the cancellation due to poor weather of our first trip of the year back at the end of April I waited anxiously on Saturday for the e-mail from Richard Crossen to find out whether or not our re-arranged trip for Sunday was on,thankfully the news was positive-yipee all systems go !!
We met up with friends Neil and Gail at 07.00 at the Harvester just off the M4 at Llandarcy and following a relaxing drive on quiet roads were soon tucking into a bacon "butty" at the cafe at Neyland Marina.
Richard,Cliff and our fellow passengers soon joined us and after boarding the Cartlett Lady we headed down the haven out into open sea.
We soon reached Skokholm and then pulled in close to Skomer to take in the spectacle of the huge numbers of breeding auks,the sea and the air was filled with the calls of Puffins,Razorbills and Guillemots as well as plenty of Fulmars and Kittiwakes with the ever ready larger gulls ready to plunder the smaller birds for a free meal.
I soon found that photographing auks from a rocking boat with the speed with which they fly is no easy task but was reasonably pleased with a couple of shots. 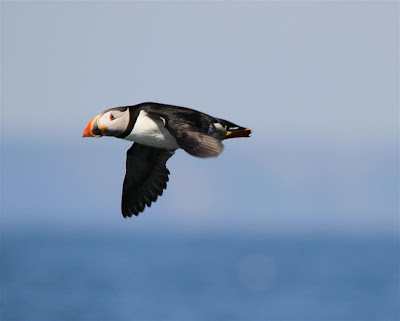 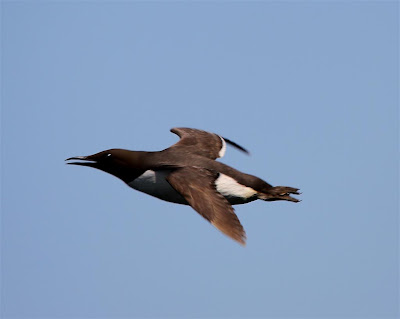 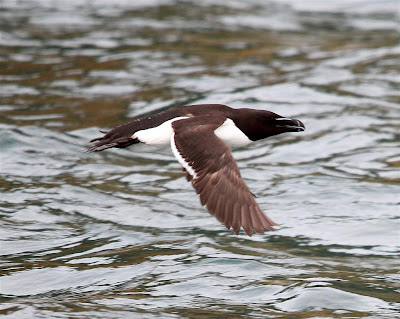 The cameras clicked away and it was soon time to push on and with the sea a little choppy for the first time on this type of trip I have to admit that I did feel just a tad "icky".

As we neared Grassholm the breeding Gannets started to fly past thick and fast and before too long we could see the white topped island with it's familiar white "cloud" of Gannets above,they were everywhere. 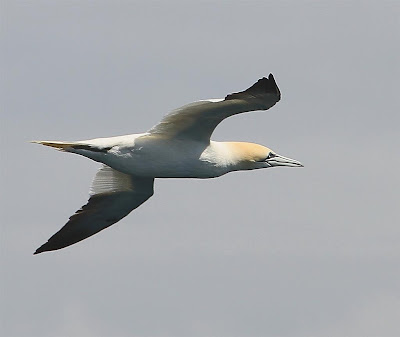 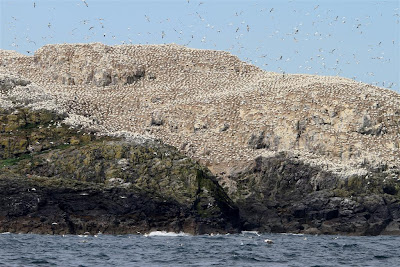 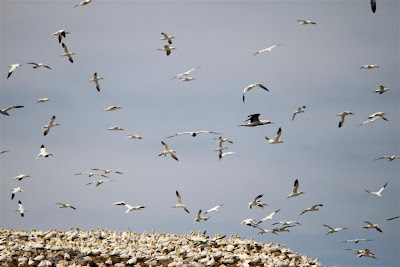 We pushed on in search of cetaceans and after about 3 hours into our journey and as we approached The Smalls the cry went up "Common Dolphins coming in ",we were soon into a large pod and the cameras buzzed into overdrive,they came in so close to the boat that using the "Bigma" was a complete waste of time and I soon changed over to my smaller zoom lens.

This was my first serious attempt at photographing dolphins and it is certainly not the easiest thing I have ever tried !!

To try and anticipate when one is likely to jump clear of the water is a nightmare,I literally ended up just pointing the camera in a general direction and firing off bursts !! 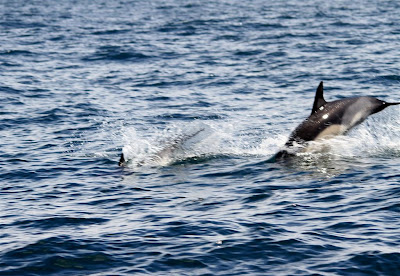 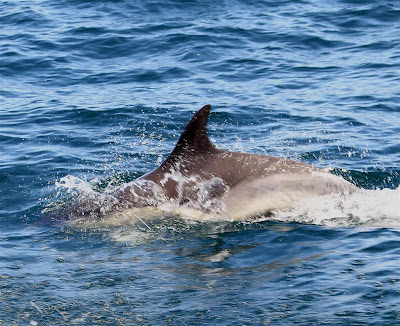 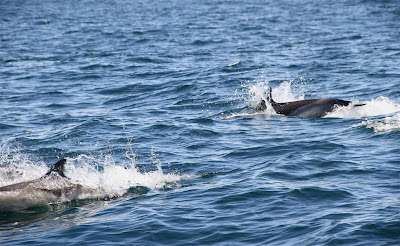 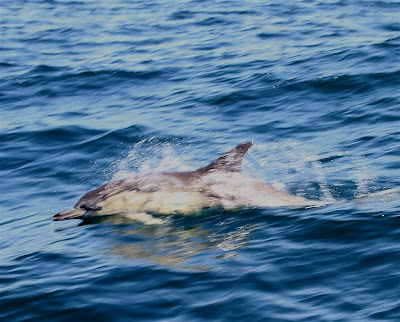 We moved on and soon encountered another pod and the total count was around 150 but there were certainly far more further out from the boat with probably several hundred in the vicinity.

We pushed on and the sea had flattened considerably so I felt a lot better and soon tucked into the superb picnic that Teresa had prepared,there had been a few Manxies around as we had encountered the dolphins but in all the excitement I missed a rare photo opportunity.

Our turnaround point was soon reached and we headed back to Neyland hoping to run into another pod of "Commons",sadly they did not find us on our return leg and as we motored home a selection of the larger gulls tagged along for company. 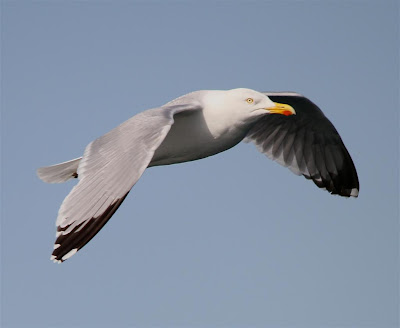 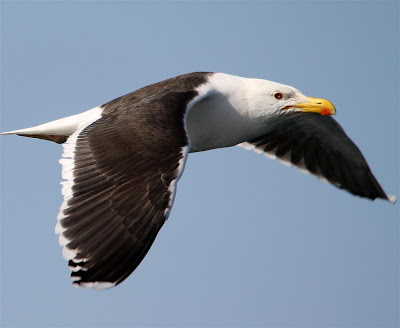 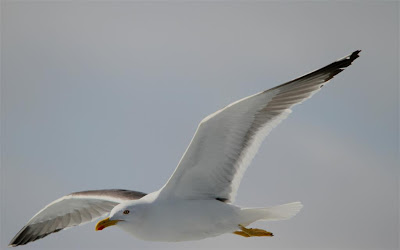 The forecast had been a little mixed and we had been prepared for some rain but on this occasion luck was with us and the last few hours of the trip were enjoyed in glorious sunshine. 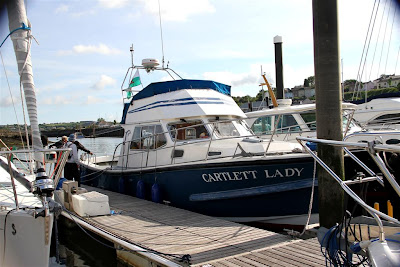 Our friends Neil and Gail certainly enjoyed their first "outing" and a fantastic day was enjoyed by one and all,huge thanks to Cliff and Richard for organizing the trip and further thanks to Richard for all his helpful tips on digital SLR photography,fingers crossed I can develop in time to take the same fantastic images that he does.
Posted by Jeff at 6/10/2010 06:39:00 pm No comments:

Just when you think you've got an Otter ! 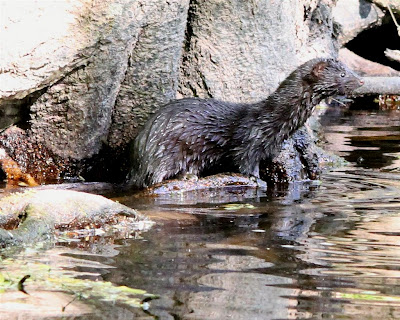 You're out looking for Kingfishers,something slinks into the water from the far bank of the river and just when you think you've got an Otter in broad daylight............... 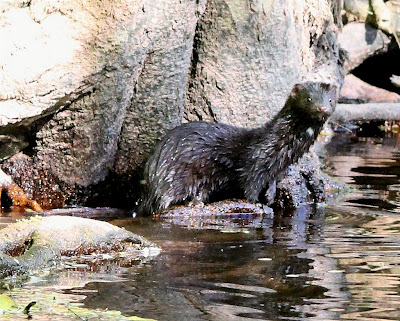 Few pics of Barn Swallows in the sunshine,nice to see another use for a car aerial !! 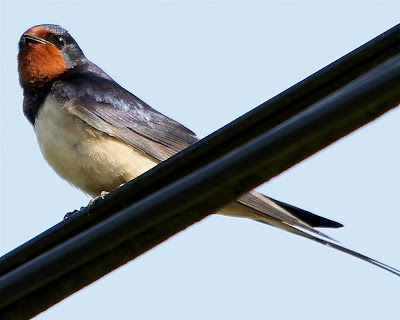 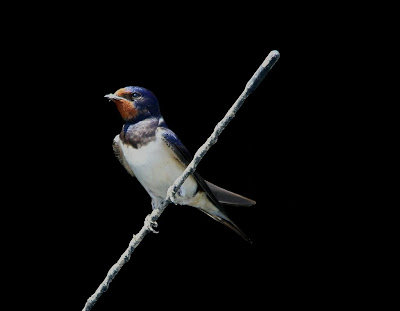 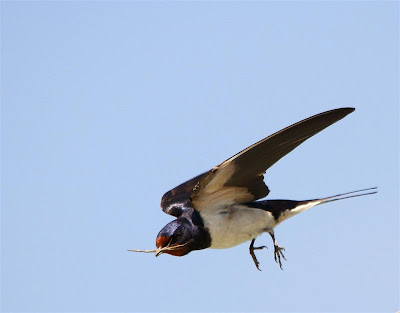 With a week off for Whitsun and stonking weather what better time could there be for a real "mega" to turn up in South Wales and less than and hour's drive away.
I'd seen Marmora's Warbler in the scrub in the Bocquer Valley in Puerto Pollensa on my last visit to Majorca in 2005 but like most birders had not seen one in this country
A text from Colin Gittins mid-way through Thurs 3rd June alerted me to the bird (nice one Col !!) and a round of texts saw myself and Wayne meet up at Asda's car park at Merthyr Tydfil early next morning,Kevin was working and Dan and the rest of the J-Js clan were touring North Wales.
We soon arrived at Blorenge and parked up in the Foxhunter's car park having been told that the bottom car park was full,it wasn't full which p....d us both off a little and we joined about 40 birders from far and wide scanning for the bird.
We had been told that the bird was showing well and it soon flew over our heads and crossed the road whilst doing a territorial circuit.
It sang really well at times and we enjoyed corking views although much to my disappointment it didn't show close enough to get a really good photograph. 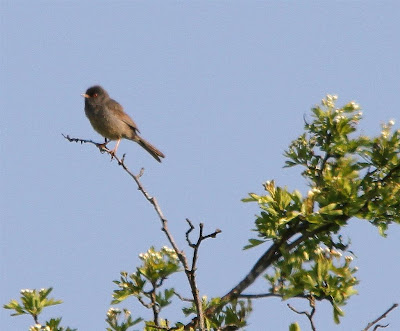 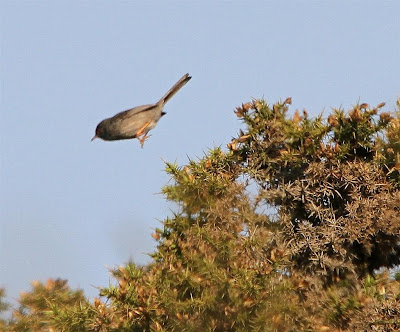 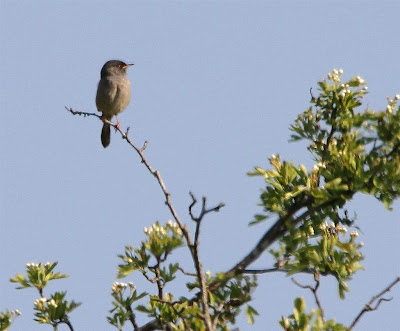 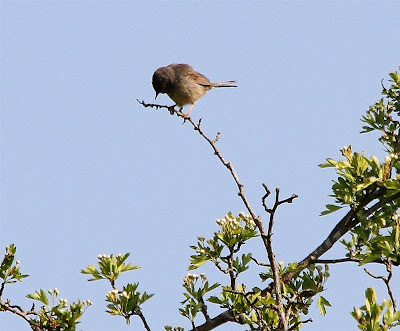 I did manage a few but none that I was really pleased with.
We watched for about an hour and a half and with both of us having other committments to get home to we left at about 09.30 having first had a chuckle at Lee Evans and his bunch of disciples,"is that the best view you've had of a Marmora's Warbler Lee" and so on !!
It was Tunnocks all round as we got back to Wayne's car,yet another UK lifer "in the bag".
Just as we pulled into Asda to pick up my Jeep my mobile rang,it was Mr J-J himself having just picked up my text message from about 15 hours previous and sounding in a mild state of panic,he will go to these remote places where there's no mobile coverage.
To say that we "gripped him off" and took the p...s is something of an understatement,"I'm not back until Sunday evening-will it still be there ? !!"
Well it did stay and I'm pleased to report that both Dan and the young "Twitchmeister" did catch up with this fantastic bird late on Sunday afternoon,well done lads.
Hope it stays a little longer,I'd love to have another bash at getting a good photo.
Posted by Jeff at 6/08/2010 08:56:00 pm No comments: 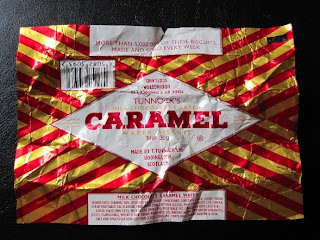