Didn't venture far this weekend and stayed fairly local but still bagged some great birds and managed a few images that I was quite pleased with........... 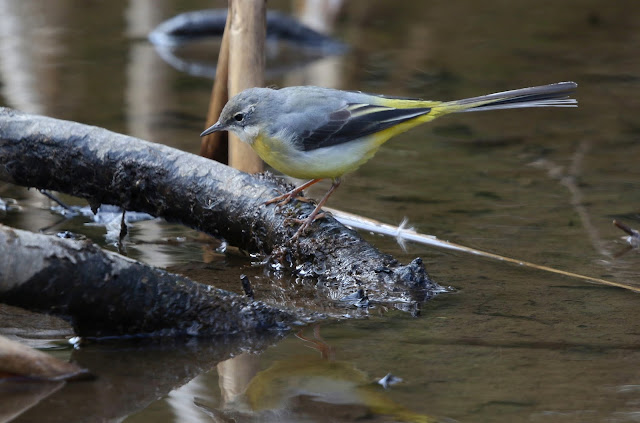 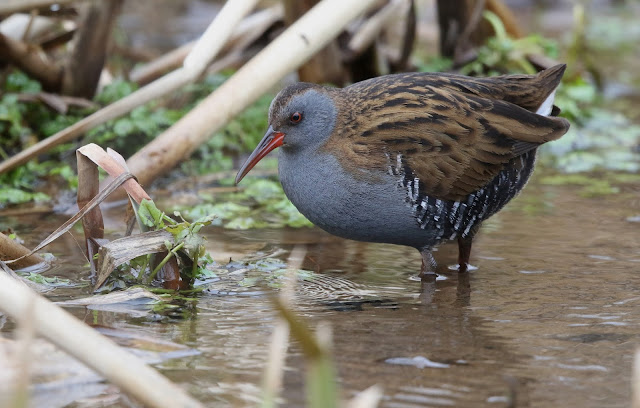 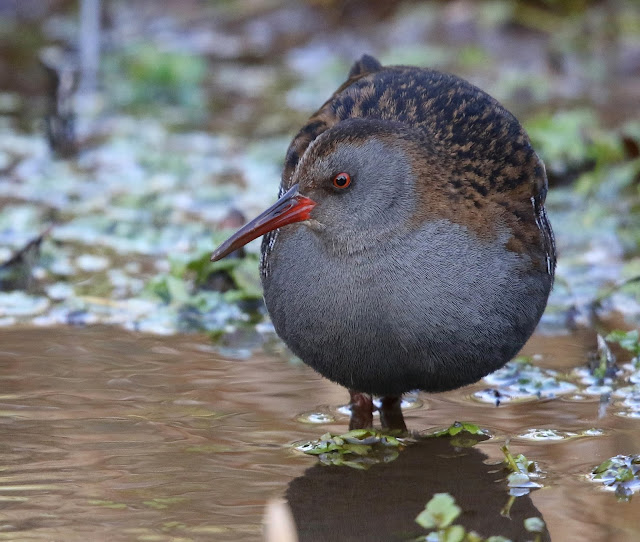 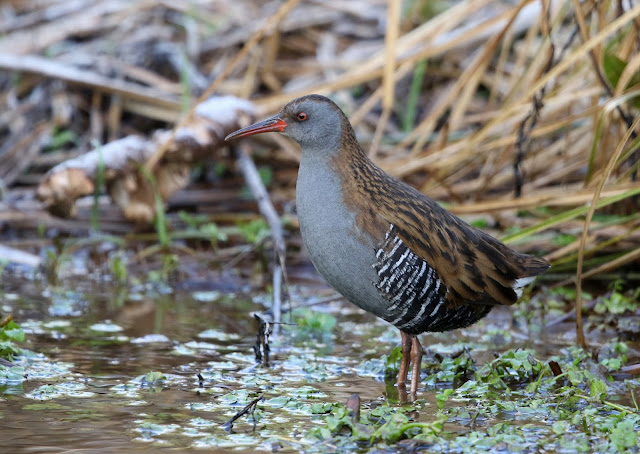 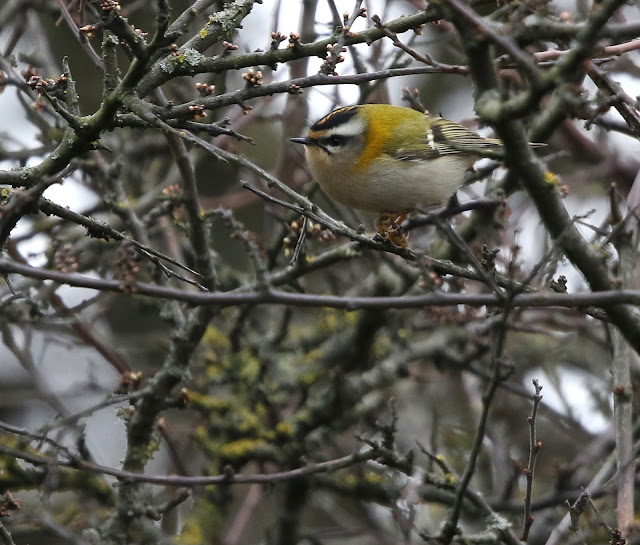 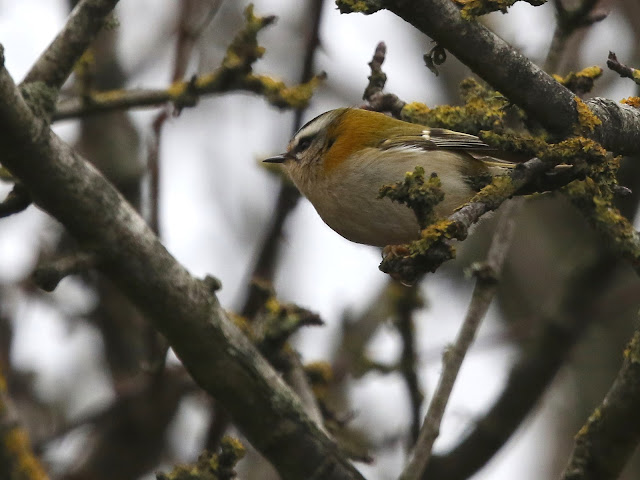 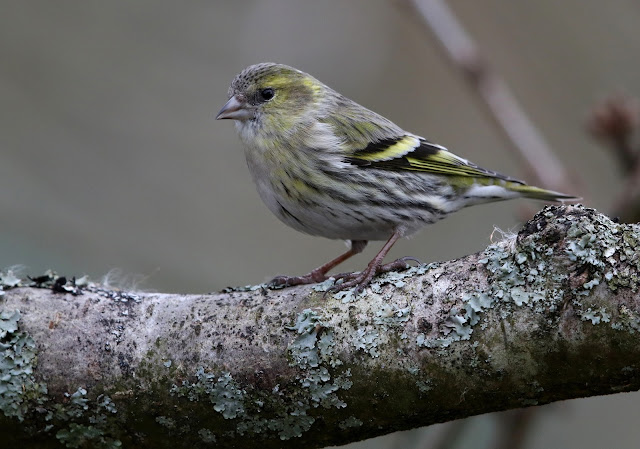 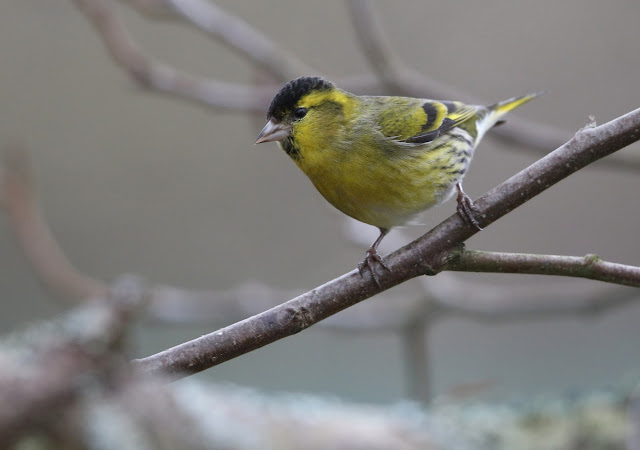 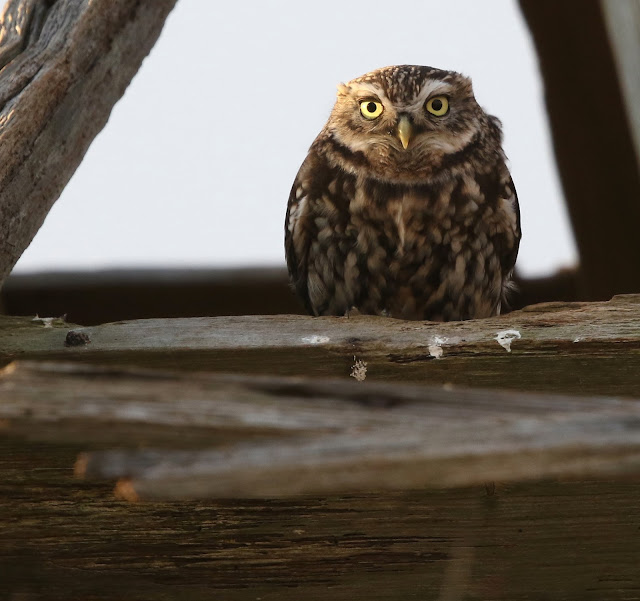 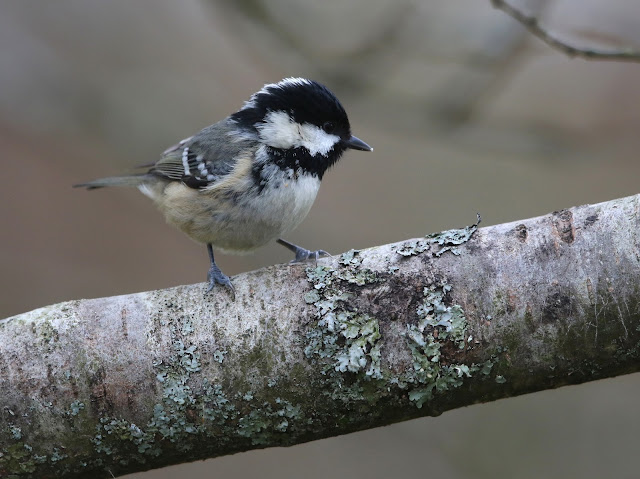 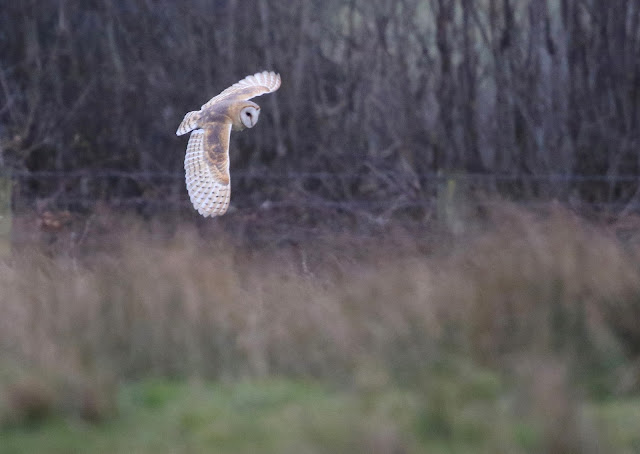 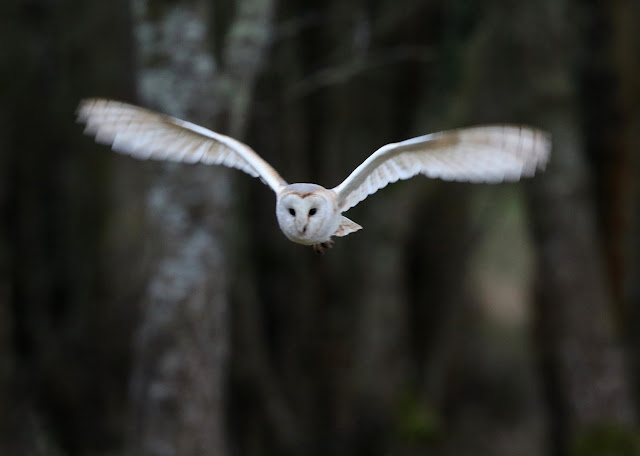 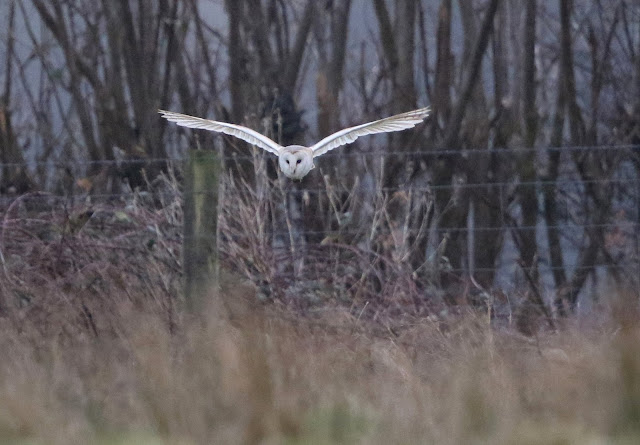 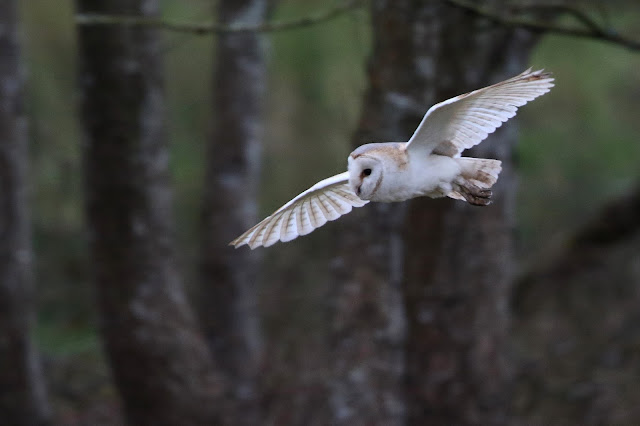 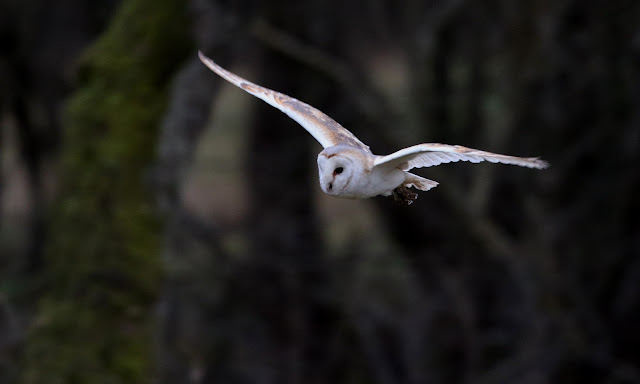 Unfortunately the Firecrest didn't want to play ball and didn't come close and the Barn Owl pics were taken late in the day in fading light so stupid ISO.
Posted by Jeff at 3/07/2016 09:15:00 pm No comments:

Myself and fellow "togger" Richard Smith decided to "cross the bridge" last Sunday and pay a visit to Gloucestershire firstly trying for the long staying pair of male Penduline Tits on the east side of Gloucester and then spending some time at Parkend in the Forest of Dean hoping for Hawfinch which have been quite regular at the feeding area near the cricket field.
With Richard at the wheel we rocked up at Horsebere Pool mid-morning and were soon on to the birds which were feeding on reed mace surrounding the pool, I had hoped that they would again fly to the sallows at the edge of the feeder stream affording a closer opportunity as they had done on my previous visit but unfortunately this was not to be.
The birds stayed in the reeds for the time that we were at the site and all either of us could manage were a few "record" shots......... 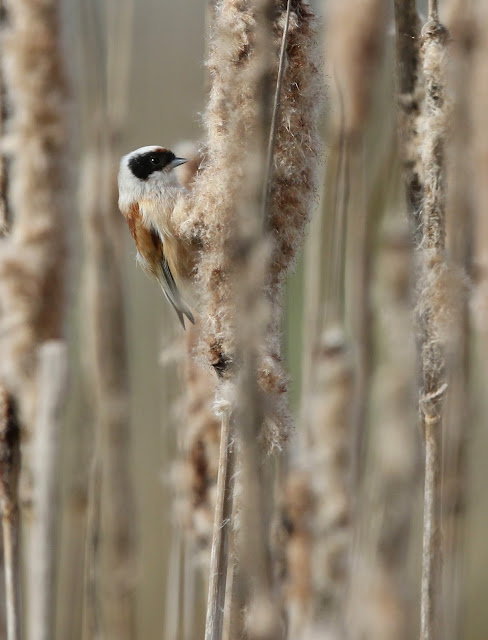 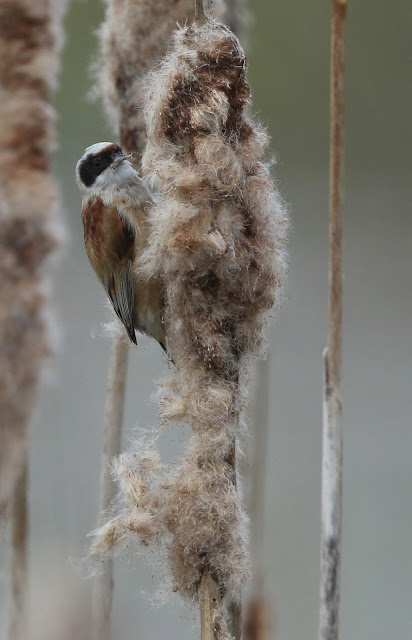 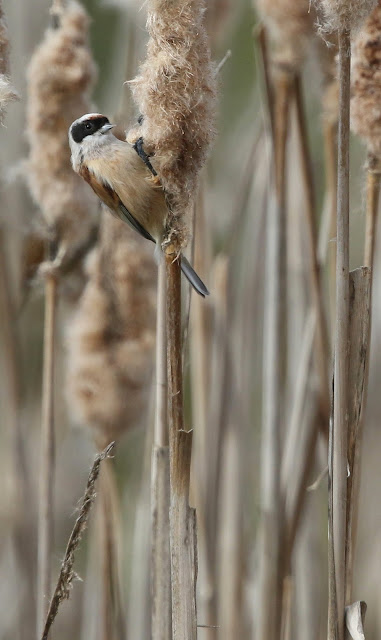 As the birds did not look as if they were going to move from the reed bed we decided to push on and within half an hour were driving through the Forest of Dean, we arrived at Parkend and quite easily found the feeding area below the yew trees on the lane at the side of the cricket field.
Richard stayed in the driver's seat and I moved into the back and with the aid of a couple of bean bags resting on the window cills we were ready and waiting for Hawfinch.
We were pleasantly surprised that there were no other "toggers" present and we had the premier parking spot all to ourselves opposite the feeding area, we put down a liberal sprinkling of seed including some sunflower hearts and despite the best efforts of the local sheep trying to eat our offering birds quickly started to drop from the trees to feed.
These including Blue, Great and Coal Tits, Chaffinches, Robins, Blackbirds, Song Thrushes and Nuthatches and after about a 40 minute wait a gorgeous male Hawfinch dropped into view.
He would feed for a few minutes and then fly into other yew and pine trees about 70m away across the green.
He returned a further two times and on his last visit came close enough for both of us to get some images that we were both well pleased with.......... 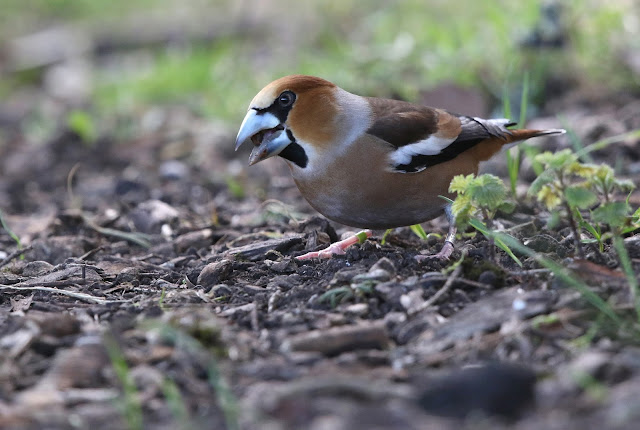 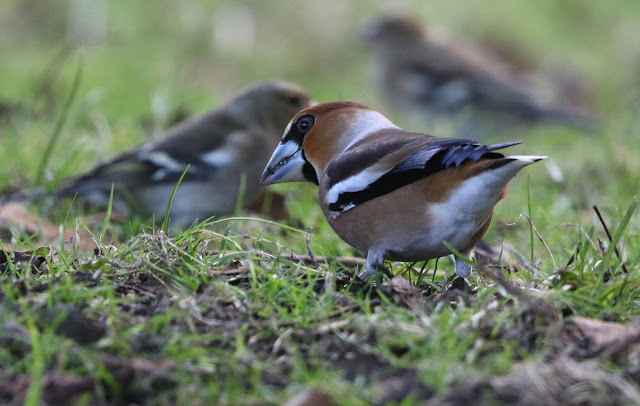 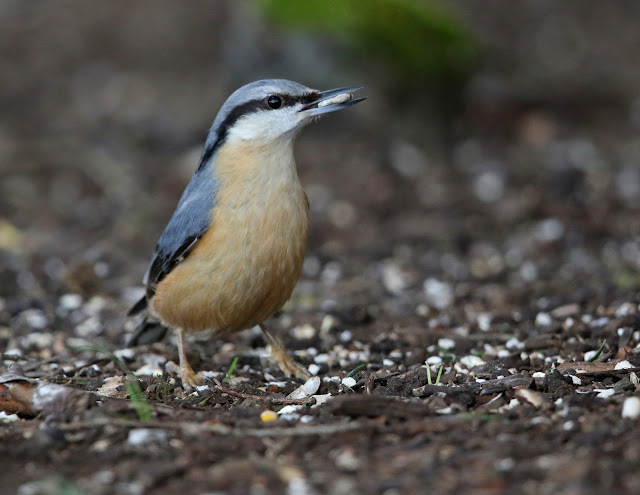 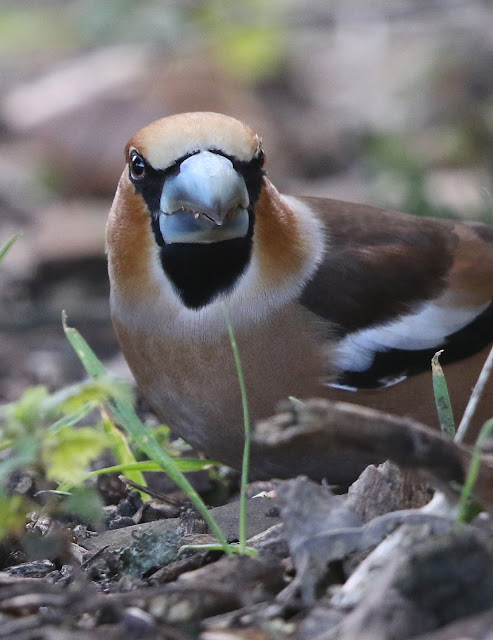 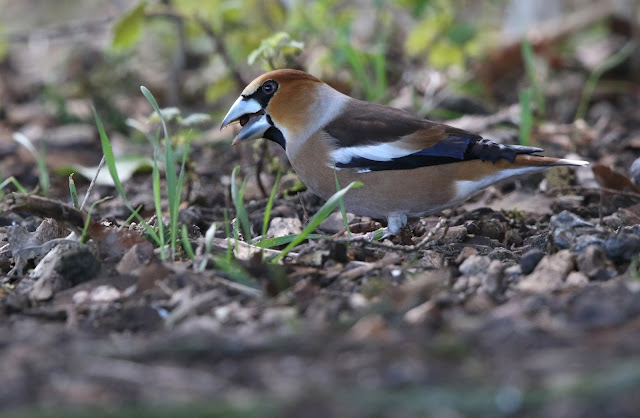 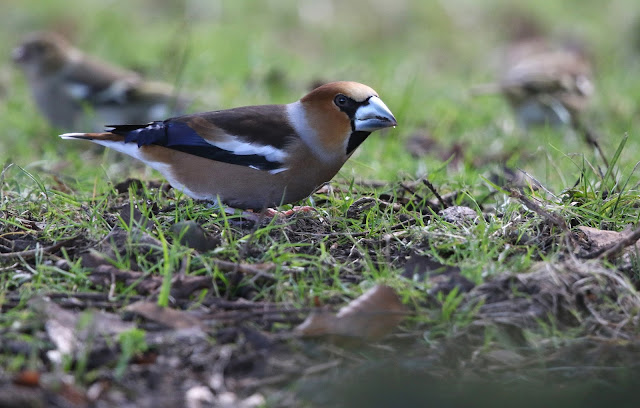 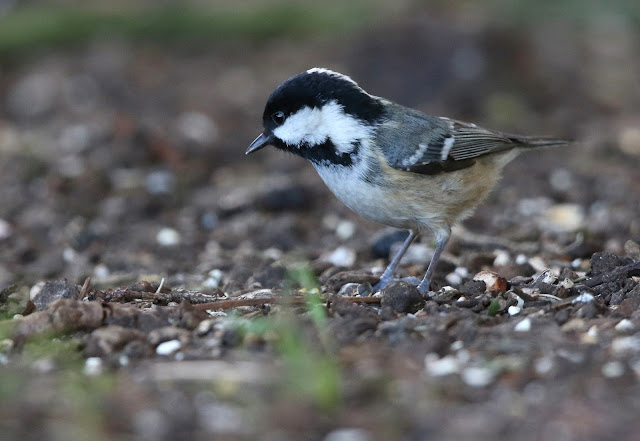 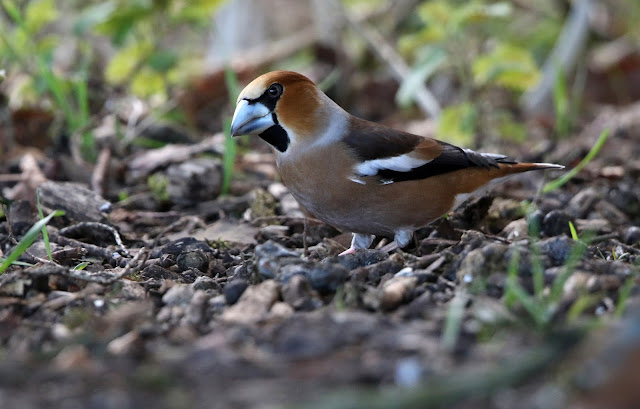 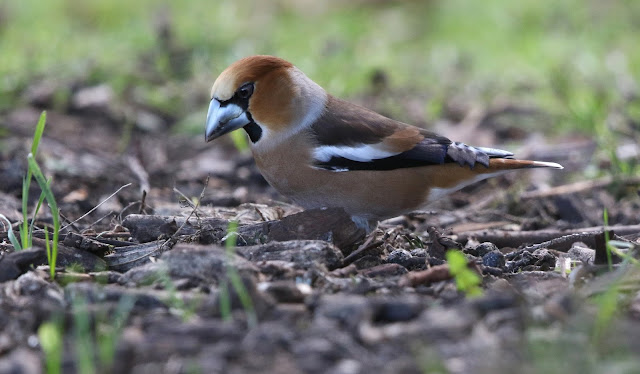 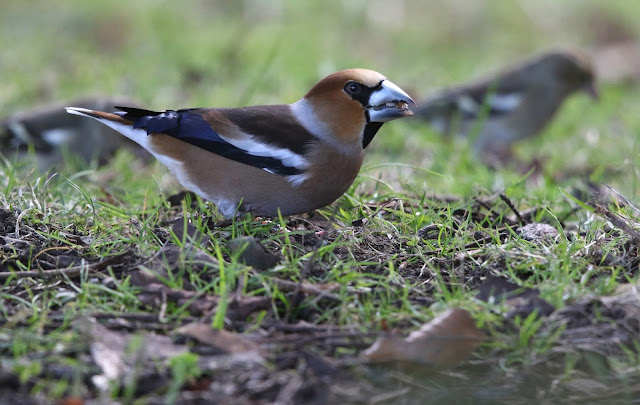 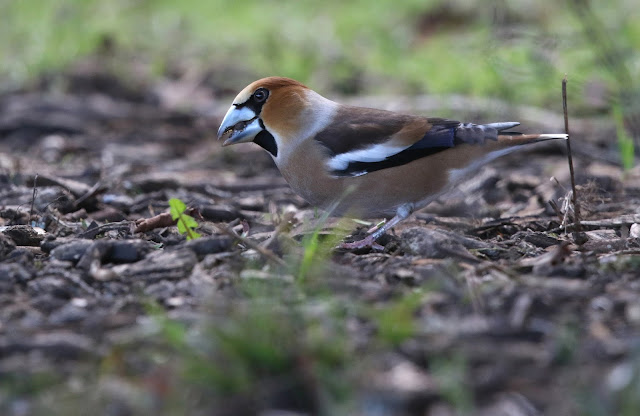 The weather had been dry and bright but in the shade of the trees we had been forced to crank the ISO up to around 2000 and as the light started to fade we decided to move on to the woodland surrounding Parkend church in the hope of a Lesser 'pecker but despite a good search we left empty handed and headed for home, what a cracking day out and probably both of us had our best ever views and photographs of a corking male Hawfinch, happy days !!
Posted by Jeff at 3/01/2016 08:57:00 pm 1 comment: