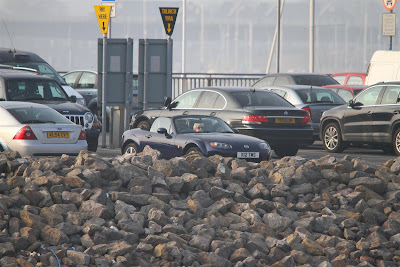 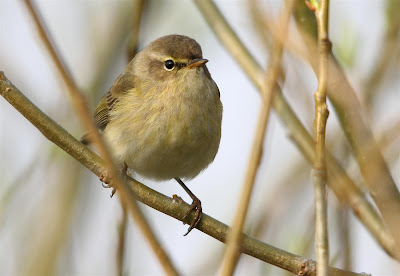 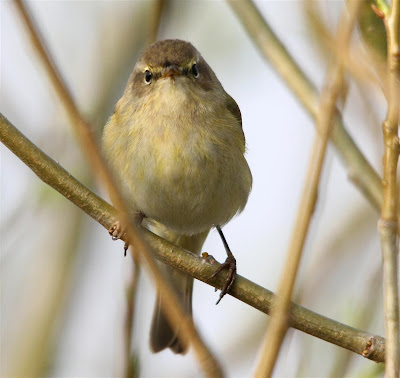 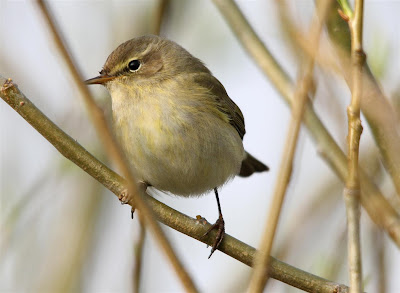 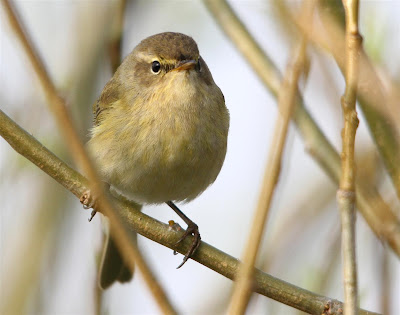 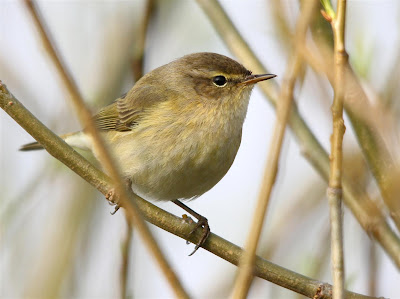 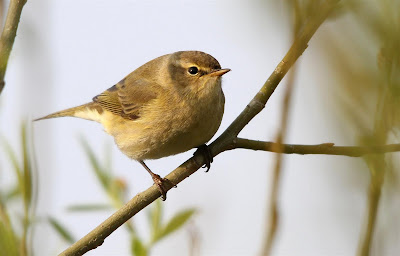 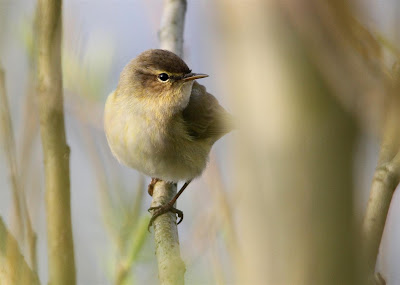 After a morning finishing off some DIY and doing a bit in the garden Teresa and myself popped down to Cardiff Bay in the afternoon for a couple of hours.
Whilst Teresa relaxing in the car doing a bit of "people watching" I strolled across the barrage as far as the sails hoping that I may catch up with the Bonaparte's Gull.
The light was very hazy (that's my excuse anyway) and I failed to connect with the gull but on the way back to the car I heard a Chiffchaff calling in the only tree on the barrage,a scruffy old willow sprouting out of the rocks by the end of the lock gates.
The bird was quite confiding and I managed a few nice record shots of what was probably a very new arrival.
Posted by Jeff at 3/28/2011 09:29:00 pm 3 comments:

Geth and I had a T-riffic day out last Saturday when we managed to see the Blue-winged Teal at Sandy Water Park, and both Green-winged and Eurasian Teal at Peterstone. 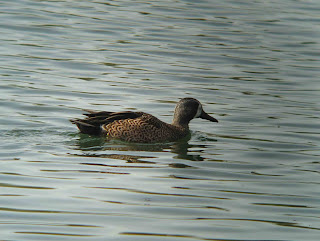 Ever so slightly better than my first attempt (see below)!

I'd been keeping an eye on sightings of the recently found Blue-winged Teal all week hoping that it would stay until the weekend so that I could get some good "images" of what would be a "lifer" for me.
After touching base with Dan on Friday evening we met up early this morning at Sarn Junc 36 on the M4 and myself,Dan and "The Twitchmeister" were soon heading west,the weather early on was quite cloudy but as we drove into Llanelli it started to brighten up.
We parked up in the small car park at the side of the lake and young Gethin was first to get on to the bird which was on the opposite side of the water in front of The Sandpiper pub.
It showed quite well and I was able to get some reasonable record shots,not quite up to Dan's standard but I was quite satisfied with the results. 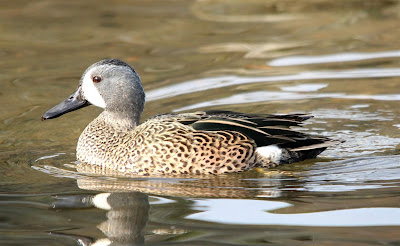 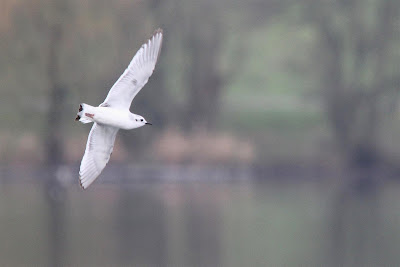 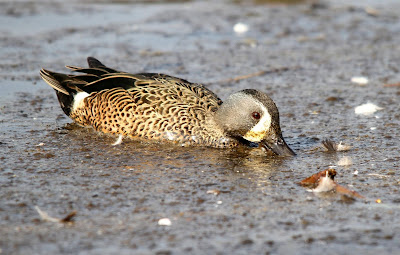 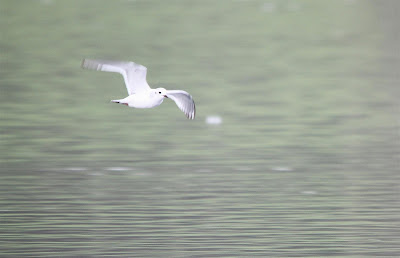 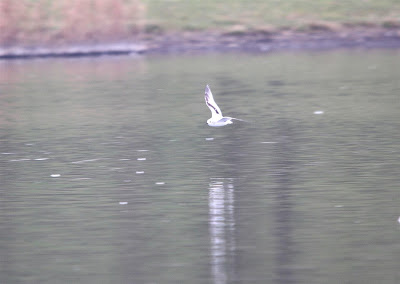 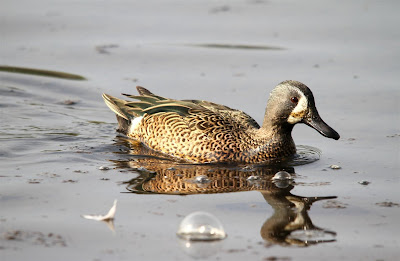 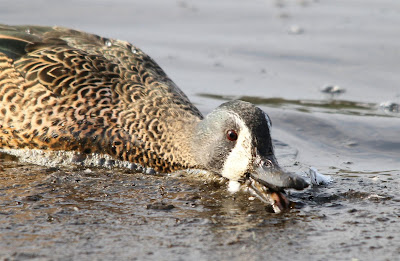 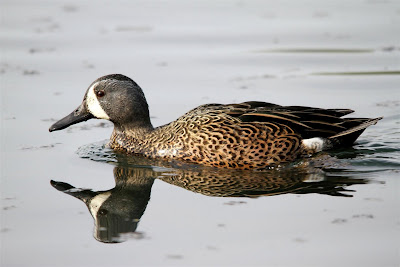 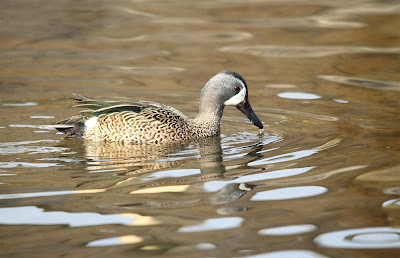 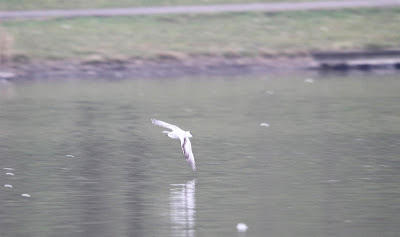 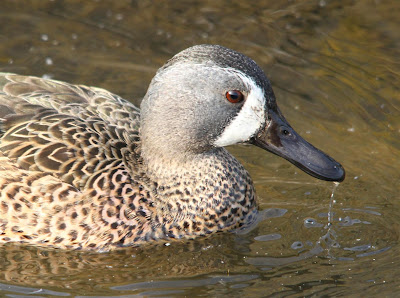 There were lots of gulls around as well and a bright Kingfisher dashed across the lake a couple of times glinting in the sunlight,amongst the gulls was a juvenile Little Gull which was found about the same time as the BWT and seems to come and go between the lake and the nearby beach.

Although it never came in really close I was able to get to few record shots.

Soon it was time to leave but not before devouring a traditional Tunnocks wafer to celebrate another lifer for myself and Geth.

Tuesday saw Wayne and me heading west and crossing over the Afon Llwchwr back to the heaven that is my home county of Carmarthenshire. We were there to pay homage to another westener - the Blue-winged Teal at Sandy Water Park, Llanelli. (Well, relative to Glamorgan, he's a westener whether he came from North America or Penclacwydd). 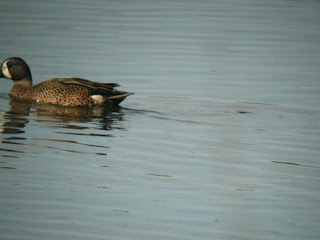 Even though I say so myself, I think I've excelled myself this time

The teal was picked up as soon as we arrived. It continuously swam up and down the northern bank, never staying still, and occasionally flying 20 or 30 metres. That's my excuse anyway. The Little Gull was still present too.

Mission accomplished we went on to Penclacwydd. The Garganey that had been around for a couple of days had departed, so we had to settle for Black-tailed Godwit, Redshank, Greenshank and a couple of Lapwing. Highlight of the visit though was a Short-eared Owl flying high over the marsh being pursued by a Crow. I've never see an owl so high up. Apparently, it returned after we left and was seen in more typical behaviour, quartering the marsh in front of the British Steel Hide.

A posting on BirdGuides of a Glaucous Gull seen at Sandy Water Park had us legging it back to our original destination. It wasn't there but it was good to bump into a gathering of familiar faces from Glamorgan who had just arrived - Mark Dutfield, Marlay John, Alan Rosney, John Wilson and Matt Evans.

We called in at Kenfig on our way home. It was still rather quiet there but hopefully, in a week or two, it'll be buzzing with newly arrived migrants. Roll on.

Not done a lot lately as I've been busy doing other stuff and what little I've done has been local.
With news of a Wheatear in the last few days at St Brides I took a break from some DIYing and after visiting B+Q in Bridgend with Teresa this afternoon we popped down to Ogmore By Sea to see if I could locate and photograph a new arrival.
Whilst a very patient Teresa relaxed in the car I had a look around for an hour but to no avail,too many "grockles" and dogs about.
I decided to cut my losses and had a look for the regular Purple Sandpipers on the rocks opposite the gate before they depart north again to their breeding grounds. 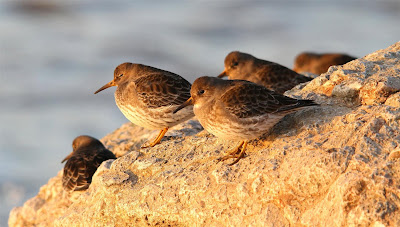 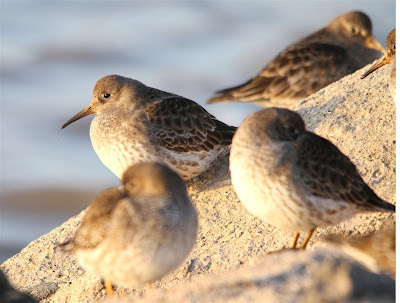 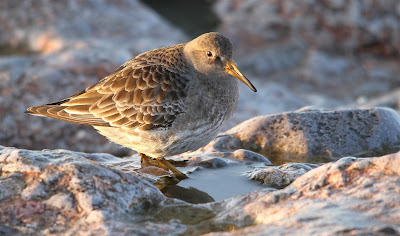 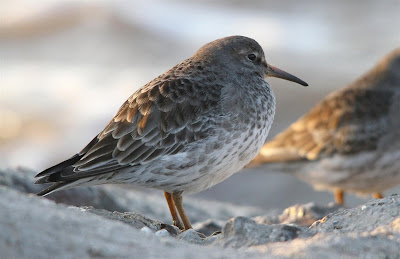 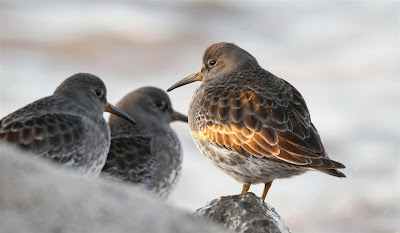 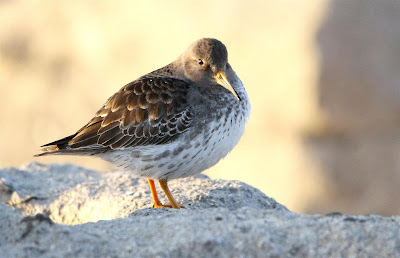 Hopefully I'll catch up with a few new arrivals in the next few weeks.

Just in case anyone is interested (probably not I know!), here's a Google Map of Gethin (and my!) patch. 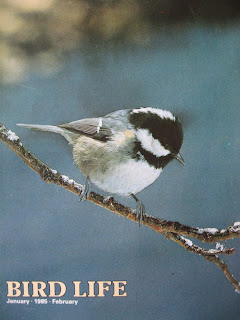 Gethin is green with envy. The Boy Birder has discovered that he is not the Whitchurch (Glamorgan) Canal Nature Reserve's Top Lister - and not by a long way.

While flicking through my old copies of the Young Ornithologist's Club's Bird Life magazines (yes, I've still got them, beginning from the Jul-Aug 1977 issue right up to Nov/Dec 1985), the Twitchmeister came across an article entitled 'On My Patch' in the Jan/Feb 1985 magazine. The patch in question was the Whitchurch Canal Nature reserve no less! The piece was penned by Shetland Wildlife impressario, photographer extraordinaire and one time local birding luminary, Hugh Harrop. 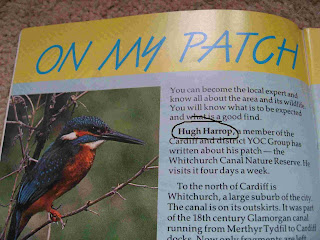 Geth was very happy with his respectable patch list of 84 - but he isn't any longer. Much to his chagrin, Hugh's patch list was a mighty 94! There wasn't much detail in the article about what species Hugh had seen on the reserve but it did include Little Owl (which isn't recorded there anymore) and Gethin howled with pain when he read that it also included Red-backed Shrike.

The clinching sentence in the article about the patch was that Hugh "visits it four days a week". That's dedication. The Twitchmeister visits it no more than twice a week (but more often in school holidays), and so he's going to have to up his game to beat Hugh's total. A challenge, he tells me, he's willing to accept. How will he get on? Watch this space!