There seems to be a hell of a lot of good ducks around at the moment - King Eider in Devon, Lesser Scaup at Barrow Gurney, Green-winged Teal at Slimbridge and our very own Taffy (Black) Duck down at Marloes Mere.

I dabbled with the idea of twitching The King Eider but having done two very early shifts (4 a.m) on the trot I was just too tired to drive all the way down to Devon on my own. I'd love to see another Lesser Scaup but I did see one in Devon a few years ago; the Black Duck looks like being part of this weekend Birders in Boxers itinerary and so I decided to go for the Teal at Slimbridge. One of those glaring emissions from my UK life list.

Parking the car at Splatt Bridge on a very pleasant morning I was greeted by birds singing everywehere: Dunnocks, Blue and Great Tits, Robins, Blackbirds, Greenfinches etc. A Kestrel sat on a post in front of the car, Long-tailed Tits carrying feathers in their beaks, Sand Martins twittering overhead, Pheasants 'coughing' all around and G C Grebes in full summer plumage on the canal. Idyllic.

I arrived at 100 Acre, Slimbridge - scene of last year's Glossy Ibis invasion - and my heart sank: a). the viewing site was miles away from the birds b). there was a heat haze (can you believe it?) and c). there were bloomin' loads of Teal around - at least half of them asleep in the reedy fringes.

"Stop whingeing" I said to myself and get on with it. For a whole hour I scanned 100 Acre back and forth, back and forth. Loads of nice birds: Gadwall, Wigeon, Shoveler, Tufed Duck, Little Egrets, Black-tailed Godwits (one in full sumer plumage), Ruff, Dunlin, Little Stint, Redshank, Lapwing, Little Grebes 'whinneying', Chifchaffs and a Kingfisher which flew back oand forth in front of me. All very nice but no flippin Green-winged Teal. It seemed to me that this was going to be an Anas horribilis. That'll teach me to go birding without the Twichmeister. On the run of luck he's on at the moment he'd have found the Teal as soon as we arrived.

I was glad when another birder arrived. Another pair of eyes could only be a good thing. Back and forth we both scanned the flooded field until finally, half an hour after he arrived, my new companion spoke those magic words . . . "I've got it!" (God, I love those words). The bird had been on the near 'shore' of the flood and must have been tucked behind some sedges. Anyway, it was finally out in the open and I managed the following record shot. 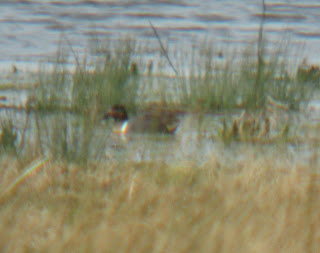 Pretty crap I'm sure you'll agree but that vertical white stripe really did stick out like a sore thumb. First lifer of 2008 safely in the bag.

I got back to the car and celebrated with a cup of coffee and the now traditional Tunnock's Caramel Wafer - I'll bring a whole packet for this weekend's trip to Marloes!

I got home in time to pick up Geth from the holiday club - I ducked out of telling him where I'd been all day - and had an early night . . . I was absolutely 'quackered'

Well,only one of those was a real bird - Sat 22.March saw myself and friend Neil at the Millennium Stadium watching the Ospreys (Wales in disguise !) thump Saracens to set up a corking EDF Cup Final v Leicester followed by a first visit to the O2 Arena in London (a venue tick !!) on Sun 23.March to see The Eagles in concert on their "Long Road Out Of Eden" tour,if you can call 6 nights at the O2 a tour !!!
I had arranged to go to Swansea with Teresa today 25.March but the plan fell through and I therefore felt a bit awkward at turning down a local morning out with Wayne.
Anyway, the news of a Great Grey Shrike on Mynydd Margam was "a bit of a turn up for the books" as I've visited the site on several occasions this winter but with no luck,the bird has probably been in the vicinity since last Oct/Nov. 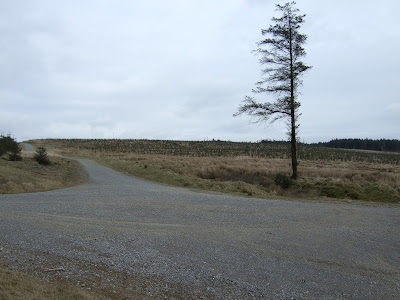 I parked up at Hafod Farm and started the long hiily trudge up to the site with my trusty Westie "Lily",there was plenty of activity in the trees with lots of Great/Blue/Coal Tits as well as Chaffinches and several Goldcrests.
On reaching the top of the mountain a pair of Ravens passed over and there seemed to be Meadow Pipits everywhere,as I walked up towards the clear fell area a small party of 4 "buzzing" Lesser Redpolls flew over.
As I reached the clear fell I lifted my bins and got straight on to the Great Grey Shrike which was perched on 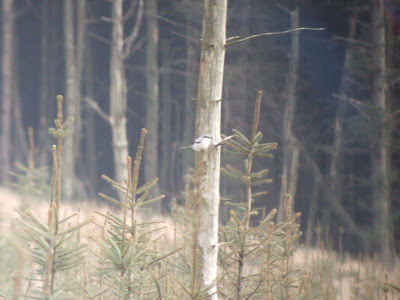 top of one of the re-planted conifers,as I set up the scope/camera to take a photo it flew across the gravel track and for the next hour or so used the various un-felled tree posts as perches w 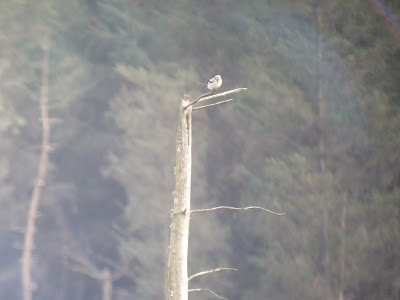 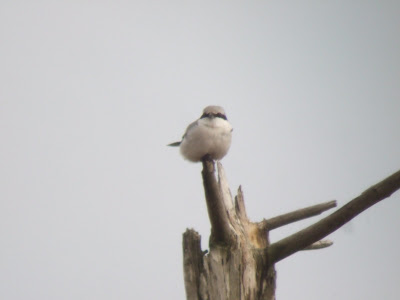 I watched the bird for about an hour as it flitted back and forth it's perches taking beetles from the floor of the clear fell always eating them on top of one of the un-felled tree posts.

It was not even bothered when at one stage a Common Buzzard "bombed" a nearby hunting Kestrel which it must have seen as some sort of threat. 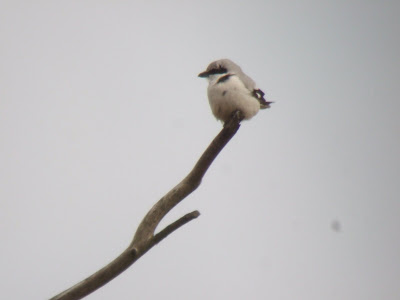 Although the bird showed really well and never disappeared from view it was always distant which with a keen wind made digi-scoping a little difficult,the battery in my camera I knew was also running low and as soon as I had got closer to the bird the bloody battery gave out,sod's law !!

No point in hanging about any longer then and so I made my way down the mountain back to the car with "Lily" in tow,I had hoped to pick up some Crossbills on the way down but was unlucky on this occasion,although my year list (I'm not listing !) is totally crap I've "ticked" Great Grey Shrike in both East and West Glamorgan in the same "first winter" period which is a feat that I've never managed before.

After a busy, but successful day at work on Tues 18th March (2 driving tests, 2 passes-one unexpected), I had a couple of spare hours to pop to Uskmouth and Goldcliff. At Uskmouth, 2 male Bearded Tits showed well, but too briefly for photos, and a couple of Chiffchaffs showed. The Little Owl was still present, with lingering Redwings and Fieldfares nearby. Pintail, Wigeon and Teal were on the sea, and a Grey Plover was a good find amongst the common waders on the shoreline. At Goldcliff, in failing light, 2 Little Owls were present: 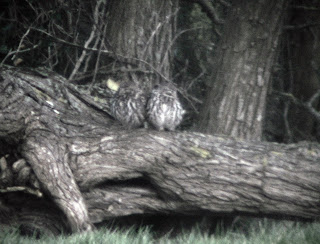 From the first platform many common waders were visible, with 3 Little Ringed Plovers being the highlight. 5 Sand Martins flitted around. 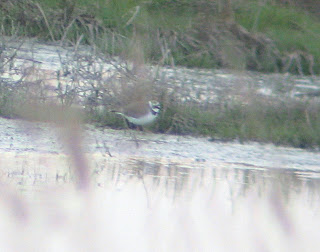 On Sunday 9.March 2008 myself ,Dan and the young Twitchmeister headed for Pennard on the Gower penninsula in search of the single Cattle Egret which was one of a major influx of the species into the U.K. and had been kicking about for a couple of weeks.
Wayne was due to join us but a very early text advising us of a poor night's sleep reduced our party to 3.
We met up early at the usual meeting place of Sainsbury's car park at Junc 36 of the M4 and headed west.
We called into Blackpill to collect my oldest friend Neil who lives there just off the main road,although not an avid birder he is a "walker who sees birds" and last year invested in a good pair of 8x42 Opticrons.
Having only seen Cattle Egret abroa 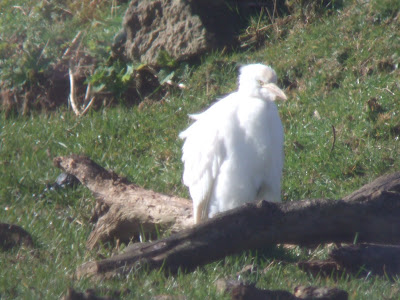 d and in this country in Devon and Dorset success would mean a Glamorgan tick ! 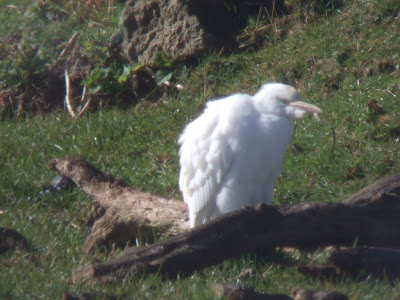 This also applied to Dan but was a lifer for both Gethin and Neil.
The weather forecast was heavy showers and we were not to be disappointed.
Upon arrival at the cattle field the bird had been favouring we were greeted by a short,sharp shower but undeterred quickly got on to the bird which gave excellent if distant views,another lifer in the bag for the young Twitchmeister !!
The blustery weather conditions and distant bird were not exactly condusive to digi-scoping but I managed a few "half-tidy record shots".
We decided to spend some time with a sea watch off Pwll-Du Head but gave up after about 10 minutes as the sea was totally barren,although a pair of Peregrines over the cliffs was a nice surprise. 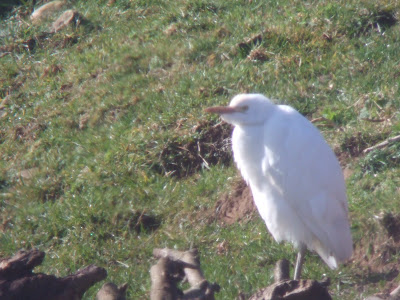 This was quite unusual as Pennard is generally good for large Scoter flocks and divers.
We thought we'd try to get better views of the Cattle Egret from the access road side of the field and whilst walking up the lane towards the viewing gate we got caught in an almighty downpour with little or no shelter which evoked memories of that fateful drenching which spawned the name of this blog site !!!
Whilst sheltering from the heavy shower we looked up the lane to be greeted by the weird sight of the egret standing in the middle of the tarmac lane !! 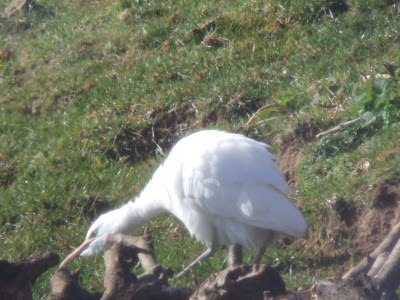 We pushed on and as the weather improved we managed some better views of the bird.
Having had our fill of the egret we decided that we would with the aid of a grid reference try and find the site of the Gower Tree Sparrow feeding station at Newton Farm.
Despite some crap map reading we eventually made our way across several fields and stiles to the derelict farm buildings where a number of nut and seed feeders hung from a tree.
We then spent a frustrating 45 mins or so scanning every feeder,hedgerow and tree in the vicinty for the elusive sparrows until after some time we managed to get on to two which perched to give excellent views and another lifer for young Gethin and also Neil.
With hunger pangs becoming more prevelent we headed for home dropping Neil off in Blackpill on the way.
Another enjoyable morning out in good company and a couple of "cracking" birds to add to this year's as yet meagre year list.
Posted by Jeff at 3/17/2008 08:28:00 pm 3 comments:

A Rail from the rails

On Friday 14th March, I spent most of the day travelling behind vintage steam locos at the West Somerset Railway Gala. Many common birds and a couple of Fallow (?) Deer were seen. As one particular train approached Minehead, I noticed a bird on a grass verge near a level crossing, with a reedy ditch nearby.
As we steamed past, I was surprised to see that it was a Water Rail, only a few feet from cars waiting at the crossing. It seemed happy enough, but wasn't there when I next went past with my camera ready.
So you'll have to make do with these instead: 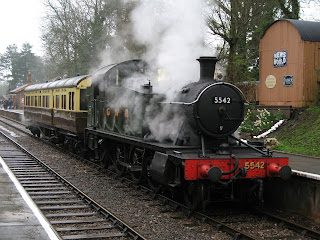 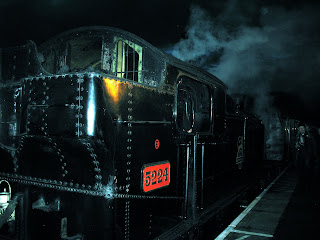