We didn't get up to the caravan this weekend and so I thought I'd stay fairly local and started Saturday early with a visit to Kenfig hoping to refind and photograph the Firecrest found by Neil Donaghy on Friday.
Graham Powell had the same idea and we chatted and had a good look around near the south pool hide where the bird had been seen but to no avail,a couple of Cetti's Warblers sung but true to form wouldn't show bar for a brief glimpse.
I left a quiet Kenfig and moved on to Ogmore which with a high tide and loads of fishermen was equally as quiet.
I decided to next call up at Ewenny Down in the hope of connecting with and photographing a Dartford Warbler now that the breeding season is over with a call into the old ruined building to check out the Little Owls on the way.
The pair did show but not close enough or unobstructed to get a really nice shot. 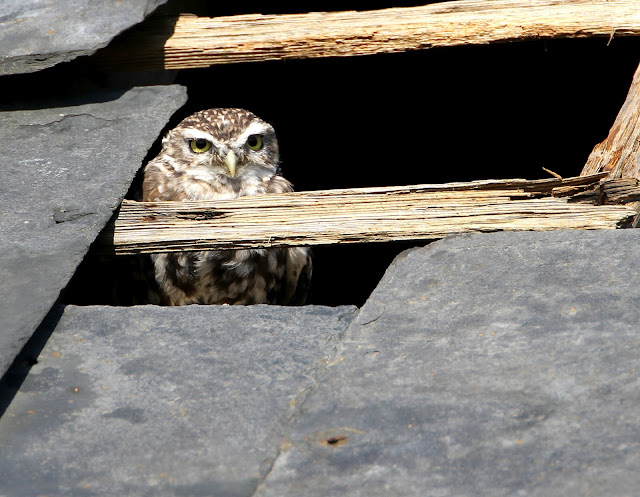 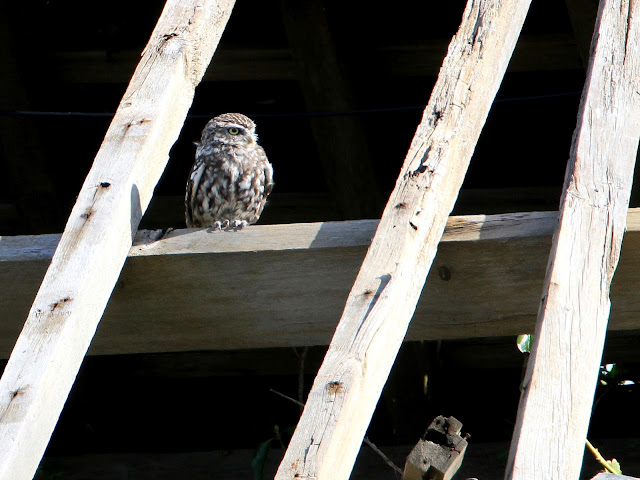 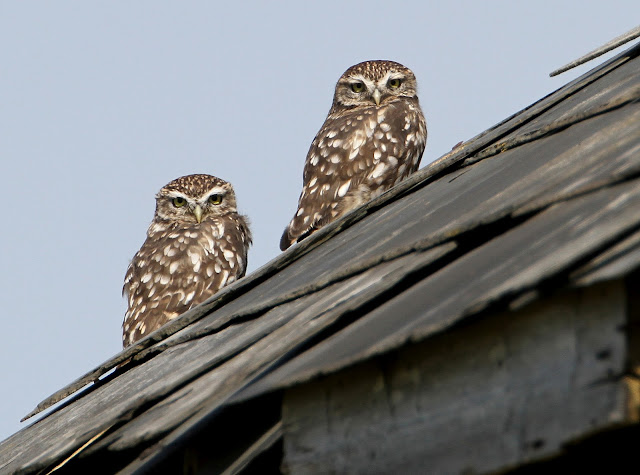 Ewenny Down save for a close overhead Common Buzzard was totally unproductive and as I was about to call back through Ogmore to check out the river on a dropping tide a text came through advising of an Osprey over Neath saltmarsh.
I changed my plan and headed down to Neath hoping that the bird would be fishing on the river or perched up on one of the bridges or many posts.
I couldn't gain access at the normal point due to locked gates to view the railway bridge and headed for Brunel Quay and decided to walk the river down to the estuary.
No sign of an Osprey and a flock of Linnets feeding on seed heads wouldn't oblige for the camera although I did get reasonably close to a pair of passage Wheatears on their way south and managed a couple of nice shots. 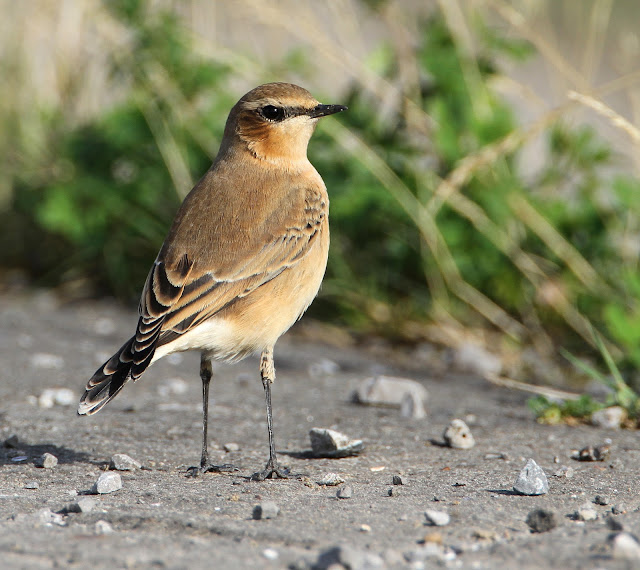 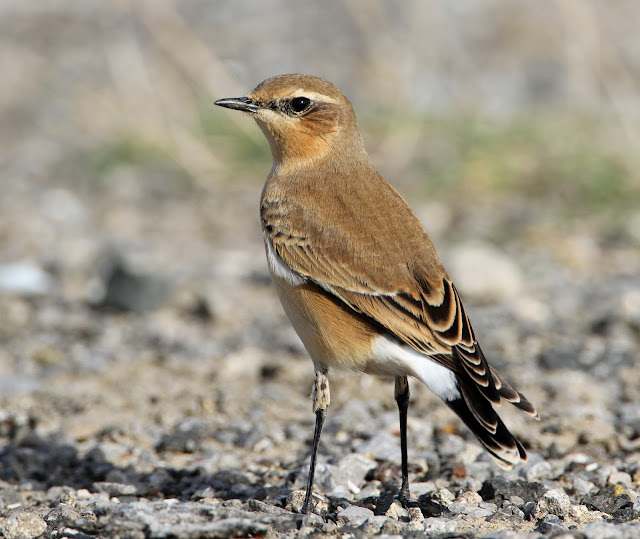 Just as I got to the end of my outward walk my mobile rang and Peter "Pedro" Morgan who was at Ogmore confirmed the he had found a Wryneck in the field due south of the sewage works entrance which after giving only a brief view on a fence post had disappeared.
My plan was to head for home but Peter was staying for an hour so I quickenned my pace on the return walk and decided to return to Ogmore.
The bird still hadn't been seen when I arrived and so we both searched the surrounding area for an hour with a Robin,Dunnock and a late Common Whitethroat raising hopes as they flitted in the hedgerow.
We were just returning to our cars when we spotted another bird on a fence post,the posture looked good for Wryneck,I took a shot and "zoomed in" and the bird was clearly a Wryneck. 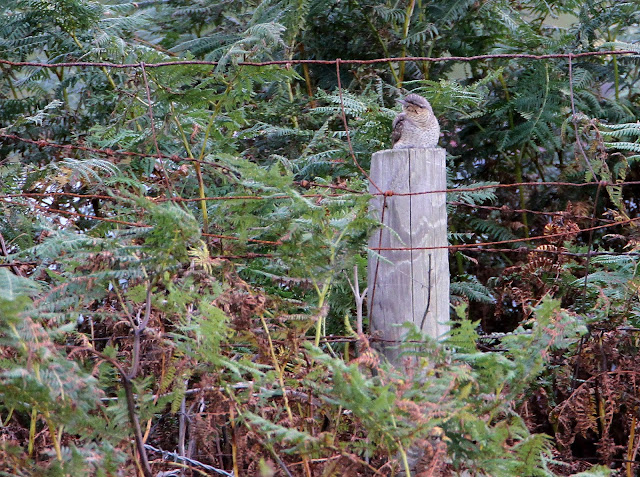 We moved closer and took a few shots,the bird was quite flighty and mobile and disappeared and then re-appeared on different fence posts and with the light failing quickly it did not reappear although we hung around for another 45mins or so. 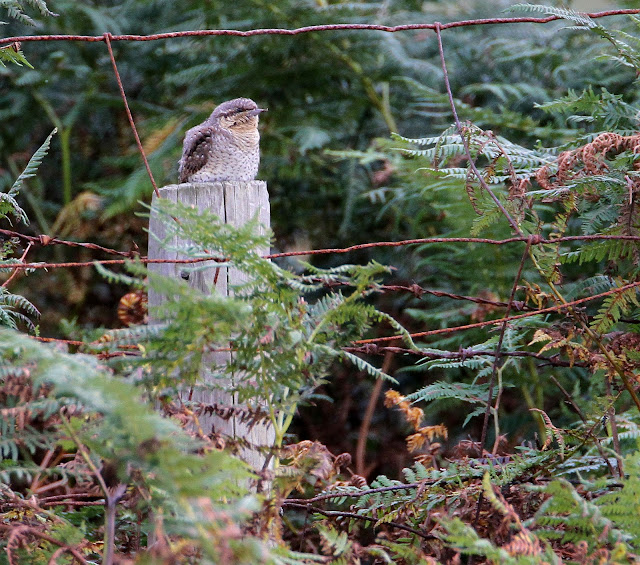 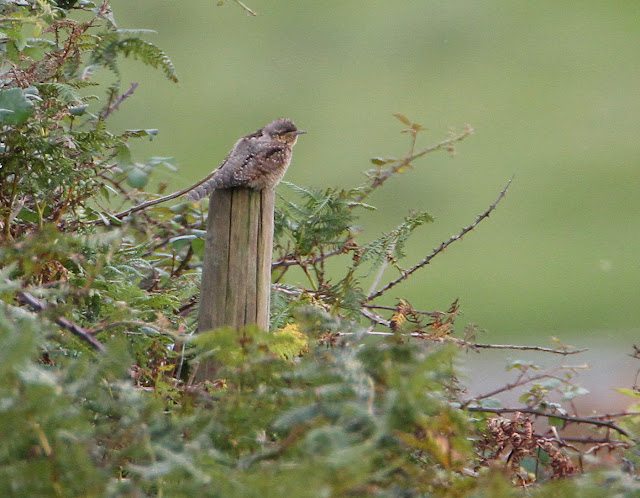 Peter was releived that we had refound the bird and I was well pleased with what was for me a Glamorgan and Wales "tick" the only other bird I'd seen being at Portland on a GBC trip several years ago.
What had been a pretty average day in the field turned out quite well in the end !!
Posted by Jeff at 9/23/2012 07:37:00 pm 1 comment: 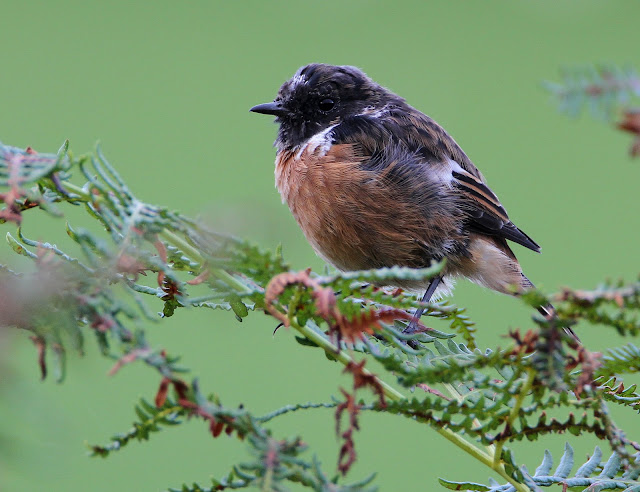 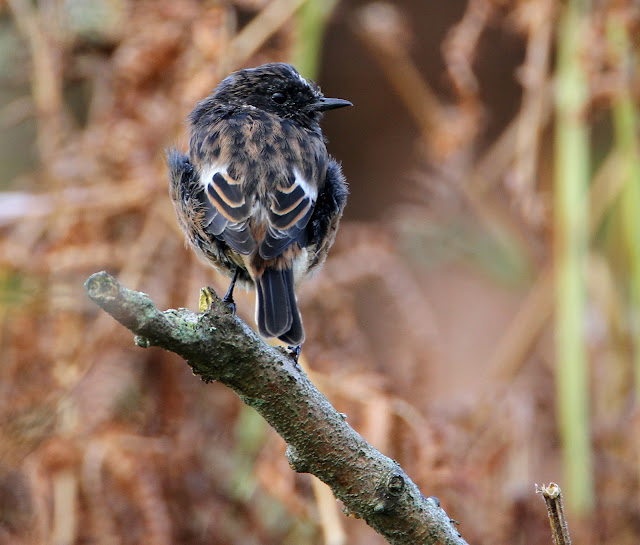 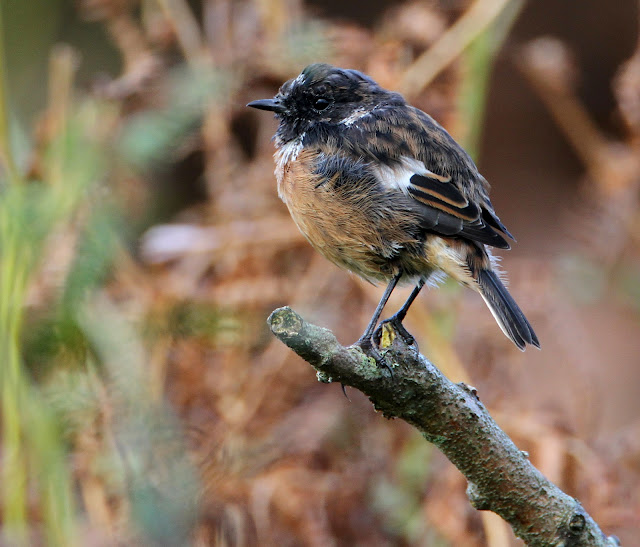 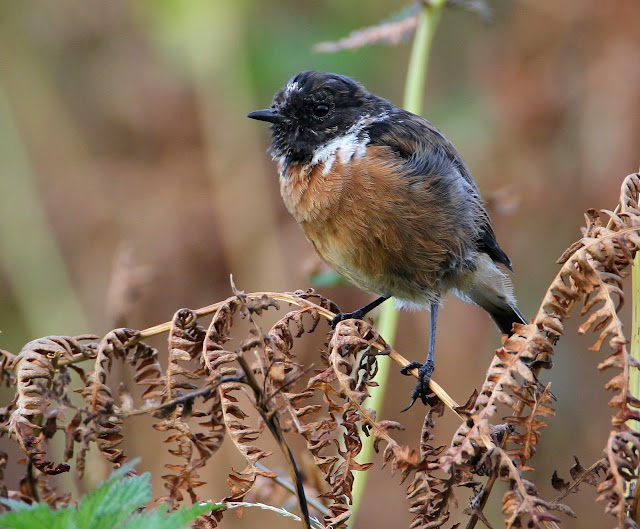 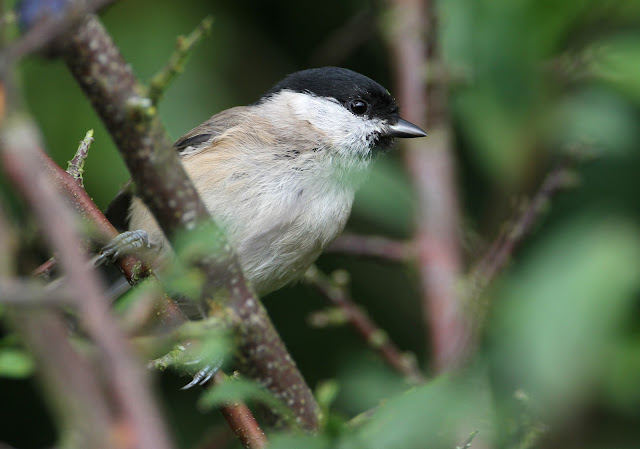 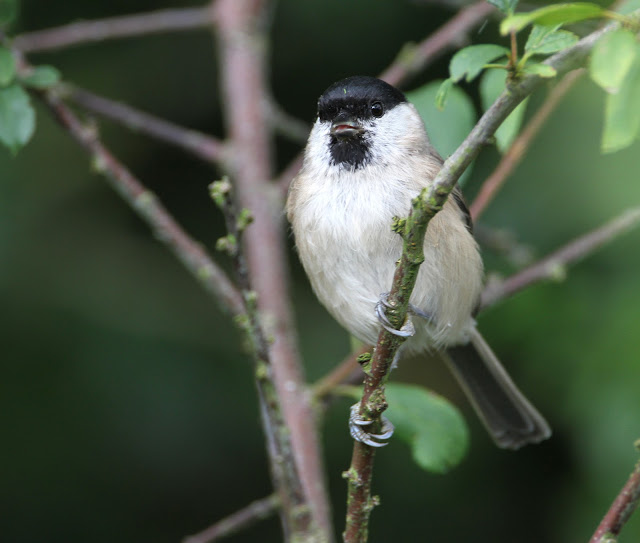 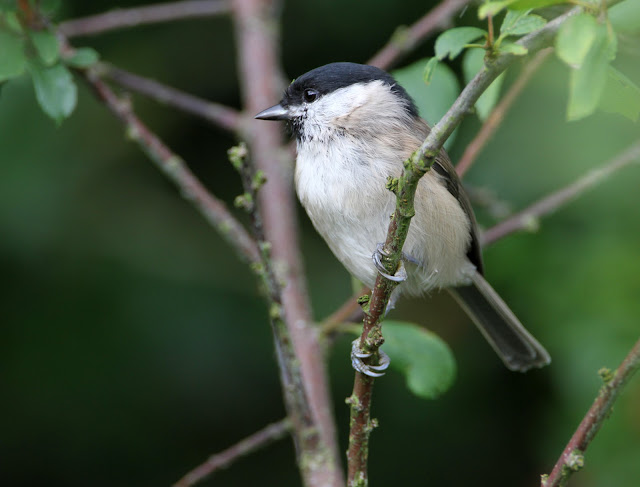 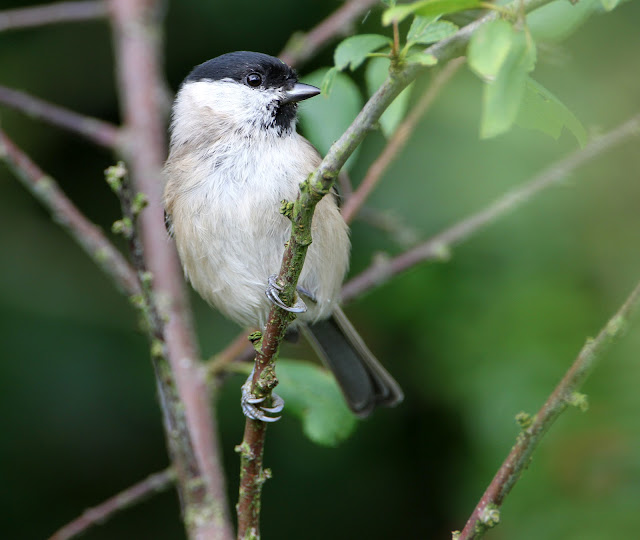 ...............had a good look around Mynydd Illtyd overlooking Brecon early Sunday morning in the hope of finding a Wryneck or maybe a Shrike but with no luck.
Plenty of Mipits building into large flocks and still a few late juvenile Stonechats which gave me a good photographic opportunity.
Back near the caravan site I found four different Marsh Tits which were equally obliging.
Posted by Jeff at 9/17/2012 08:18:00 pm No comments:

Yesterday I travelled to West Bay,Bridport in Dorset with fellow "toggers" Steve Hinton,Richard Smith and Alex Bevan to join a pelagic led by Dr Tom Brereton of Marine Life who monitors the small population  in Lyme Bay of the most southerly colony of White-beaked Dolphins in British waters.
We met up at Llantrisant at 05.00 and with the roads quiet we arrived in West Bay at 07.30 ready for the 08.30 start. 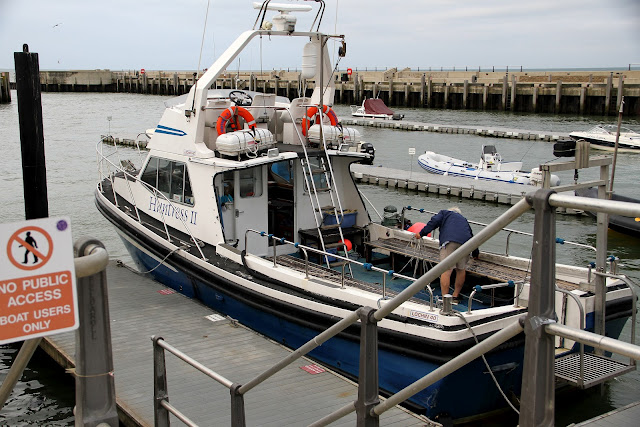 We assembled on the quay and eventually departed at 08.45 steaming out on Huntress II for two solid hours to the dolphins' feeding grounds.
It was generally quiet to start with few birds,but a small flock of 5 Common Scoter flew over and we started to pick up Gannets,Manxies,Kittiwakes and a single Arctic Skua of which I only managed to get a poor record shot. 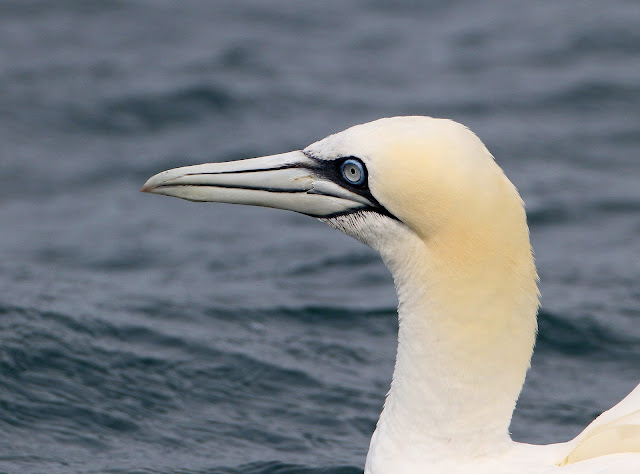 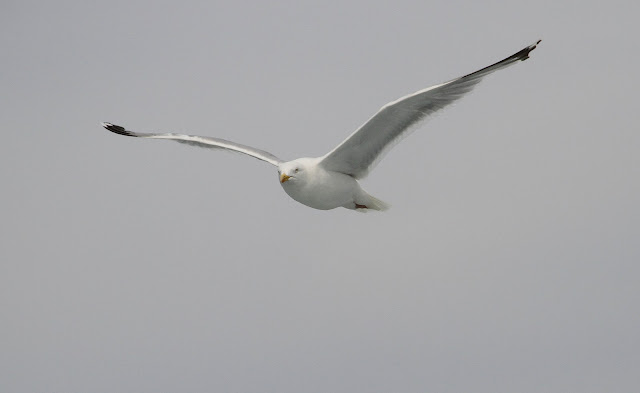 We got out to the feeding area and started to zig-zag in an attempt to find the dolphins,we struggled and it's surprising how quickly your initial high expectations dwindle away !!
At about 12.45 Alex spotted some tall dorsel fins above the surface of the water which we thought initially belonged to Risso's but on getting closer and with better views were quickly confirmed as those of White-beaked.

I've only seen the species once before on a whale watching trip out of Reykjevic,Iceland with Teresa whilst on holiday so to see them close to home in UK waters was a huge thrill and we watched them for about 45mins taking the opportunity to get some photographs as they came in close to the boat. 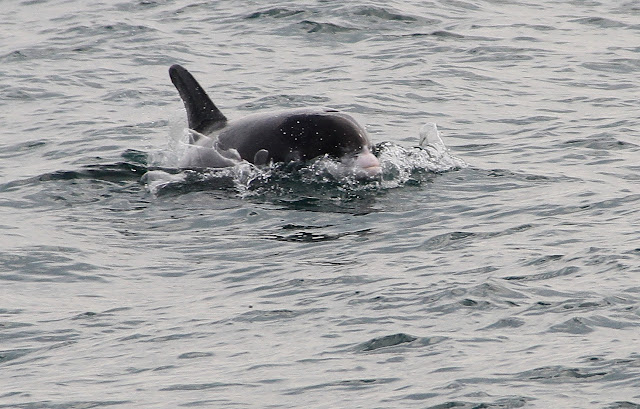 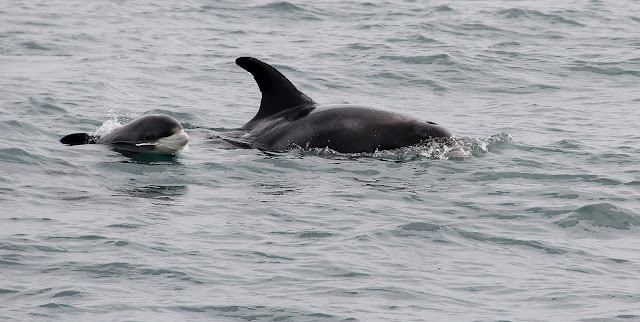 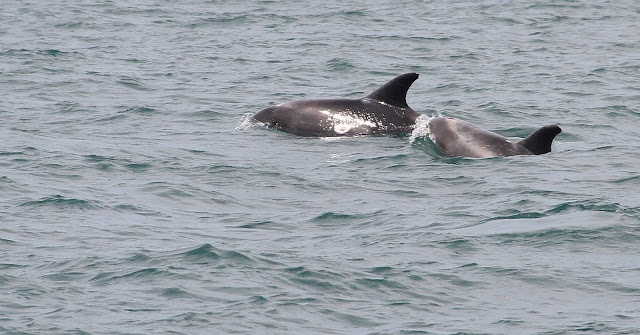 They disappeared from view and despite a further search around the "zone" we were unable to reconnect.
We headed back to West Bay mid-afternoon at a leisuerly pace and made diversions to a few trawlers where good numbers of seabirds were congregating in the hope of a free meal.
There were lots of birds sat on the water and we "flushed" a single Sooty Shearwater and I managed to get a "record" shot as it made off from the wake of our boat. 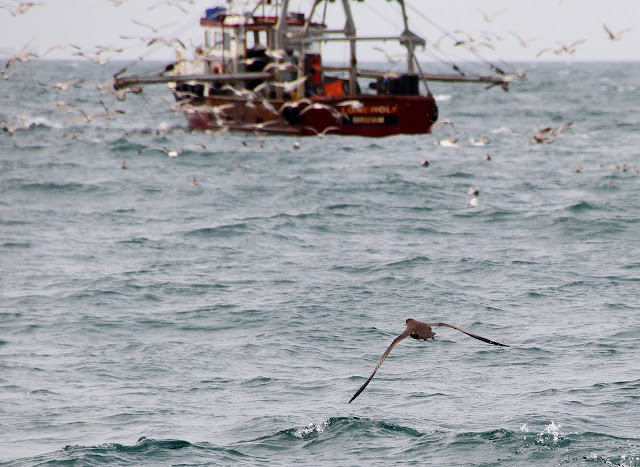 There were also several Great Skuas around bullying the gulls and I managed to get some shots that I was quite pleased with. 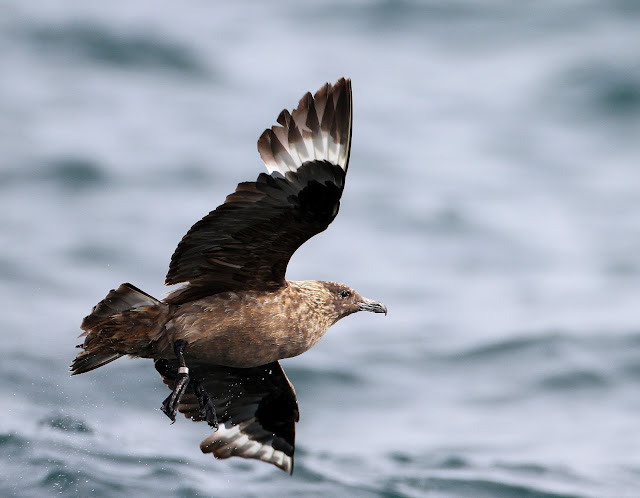 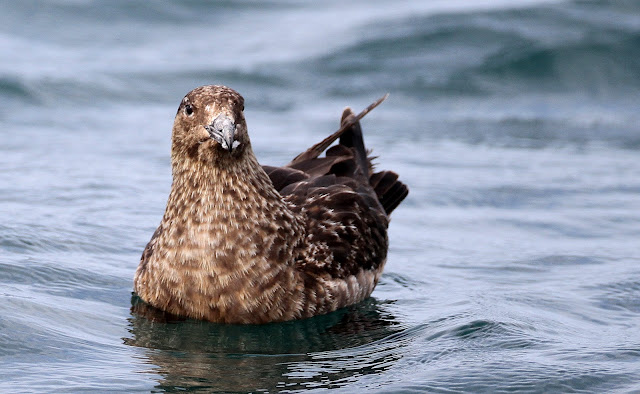 We had also hoped to connect with Minke Whale which had been seen on previous trips but we were unlucky this time,there's always next year !!
The weather had improved as the day went on and by the time we arrived back at the quay it was a beautiful warm late summer evening.
Four tired but hugely contented souls piled into the Jeep and with no hold-ups I eventually got home at 9.00pm at the end of a long 17 hour but very satisfying day out and one I would like to repeat next year.
Posted by Jeff at 9/02/2012 06:55:00 pm 1 comment: