The last two weeks in August should be a good time to get some nice birds added to my list, right? Wrong! No birds of real note turned up in my first week, that I spent pootling about the house doing a few odd jobs. I did manage to catch up with an Osprey at the Birdfair at Rutland Water though. 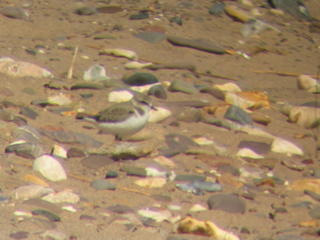 The second week was spent on the Isle of Wight, and naturally enough this is when the birds appeared. On the very day I left! Tim managed to catch up with a Spotted Crake, a Kentish Plover and a Wryneck, but most cruel of all was a Wilson's Phalarope at Farlington Marshes in Portsmouth. So near, yet so far! And to cap it all a Red-necked Grebe turned up for a day at Kenfig NNR while I was busy driving home. I did manage to brush-up on my tern identification skills however, enjoying great views of both Common and Sandwich Terns fishing along the beach at Shanklin all week.
Posted by Wayne at 8/30/2005 12:25:00 pm 2 comments: 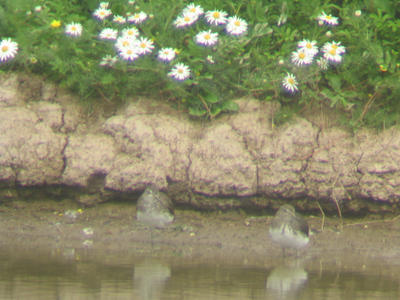 That morning I had been up to the West Midlands to collect my mother for a short visit to sunny Cardiff, and on our way back, we called at Slimbridge to see what passage waders we could find for her year list. There were many Green Sandpipers (as shown), a few Ruff, and a Spotted Redshank. We also called at Goldcliff, where a few Avocets remained, and a Spoonbill, more Green Sandpipers, a couple of Common Sandpipers and Greenshanks were present.
Posted by Tim Hall at 8/11/2005 04:02:00 pm 1 comment:

A gentle walk along the Promenade in Porthcawl with Helen and Alec last night, produced a Gannet labouring down channel and a lone Manx Shearwater. That takes me to 170, way behind Tim's 190!
Posted by Wayne at 8/06/2005 10:44:00 am 2 comments:

BirdGuides announced the death of the Bee-eater chicks on Saturday, so it was with some pessimism that Jeff, Kevin and I made the trip to Herefordshire on Sunday morning. Sure enough, on arrival we were greeted with the news that the adults had not been seen at all that morning. We hung around with the crowds for a couple of hours, but there was little to brighten up a dull morning, save a juvenile male Redstart, Yellowhammer, a passing Little Egret and a distant Buzzard. Bogbumper had a little more success.

We headed off to Slimbridge in the hope of a Wood Sandpiper and Little Stint. Neither of these were around, but we enjoyed Ruff in a variety of plumage patterns, along with numerous Green Sandpipers, Black-tailed Godwits in various stages of moult, Common Terns with young, Spotted Redshanks and a few other commoner species.

We returned across the Severn, stopping off at a wet Goldcliff in the hope of that elusive Wood Sandpiper. It was quiet here too, and even the Avocets were missing. Plenty of Little Egrets and eclipse Shelducks were around though, along with a small party of Dunlins, a Ruff, a Greenshank and a couple of juvenile Yellow Wagtails.

So this was not the best days birding we've had, but its nice to get out, and we watched some nice birds after all, including a couple of year ticks.

The day concluded however, with news from BirdGuides (once we were home, of course) that the Bee-eaters had returned late afternoon. As I write, they are there once more. A midweek trip to Hereford is on the cards.