No - nothing to do the economic problems currently facing our friends in the North. Worse than that. I've been to the Ogmore Estuary three time and I've dipped on the Icelanc Gull every time.

I had company yesterday - Jeff and the Twitchmeister. Iceland Gull would have been a lifer for the TM and he duly scoured the estuary for it. He tried really hard, scoping all the gulls but there was to be no repeat of his earlier success with the Glaucous Gull at the same site. But, as luck would have it, he still scored with a couple of lifers yesterday - a Water Pipit and Goshawk. The latter was having a really hard time from the local Ravens. This takes Gethin's UK life list up to 197 - a party has been promised when he gets to 200.

Finally, I came across this publication yesterday which might be of interest to one or two members of Birders in Boxers. 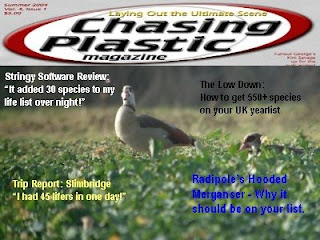 On Fri 30th Jan Wayne and myself with honorary "Boxers" for the weekend Geri Thomas and Kevin Hughes "in tow" headed for that winter birding mecca Norfolk for a long weekend basing ourselves at the King's Arms in Blakeney.
After meeting up early in Cardiff we were on our way and after an "Olympic" breakast at a Little Thief off the A14 (we know how to live !) we were soon driving through the "flatlands" of Cambridgeshire.
First stop was just outside the village of Coveny where a Rough Legged Buzzard had been seen regularly for a few weeks previously.
This was a "lifer" for both myself and Wayne having never had the luck to connect with one on 7 previous trips to Norfolk.
We bumped into a local birder walking back to his car who gave us good directions having just seen the bird,we got to the given location and the bird flew out of a tree giving excellent flight views before it disappeared behind some trees at the end of a field.
It soon took flight again and again gave cracking views with it's white tail and black terminal band very prominent.
It landed in an old tree where it perched for several minutes and provided an excellent photographic opportunity had I not left my camera in the Jeep,Doh !!!
Not to worry a great start and a "lifer" in the the bag.
Next stop was to check out a main drainage ditch at nearby Pymoor where a pair of Great White Egrets had been recently seen,just as Wayne was saying "keep an eye out boys" the pair appeared out of a ditch alongside the road and although one disappeared from view the other settled in a 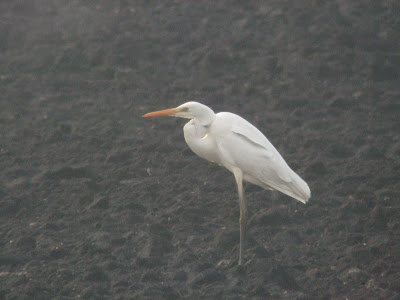 nearby field giving great views.
Also in the ditch were a couple of Green Sandpipers,"piece of p...s this birdin' "
Next stop was Lakenheath just over the border in Suffolk where a Penduline Tit and a Great Grey Shrike had been "hanging out".
No sign of the GGS although it had been seen that day and disappointingly no news of the PT.
We scanned a main pool and a local birder got us on to a Caspian Gull that he had in his 'scope.
Although the tit hadn't been seen we decided to have a go for it and took the long walk out to the bullrush populated piece of reedbed where it had been spending it's stay.
No luck with the tit but we did get stonking flight views of 2 of the 4 Common Cranes which were on the reserve,no need to call into Stubb Mill for the crane roost then !!
The first day had passed so quickly and we were soon enjoying a good meal and a couple of pints of Wherry in the Kings Arms.
Next day (Sat 31st Jan) we decided to head west and then work our way back to Blakeney.
We called in at the famous Wolverton Triangle for Golden Pheasant but as is often the case the secretive buggars were not showing.Next stop was Hunstanton cliffs for a sea watch where several Velvet Scoters had been mixed in with the large Common Scoter flocks.We were soon on a number of Velvets as well as picking up Fulmars and a few Red Throated Divers. On then to Dersingham Bog where another Great Grey Shrike had taken up winter residence,Alan Rosney,Gareth Jenkins and Mike Wheeler were in Norfolk on the same weekend and as they were already at the bog and on the bird a quick phonecall soon had us joining them. 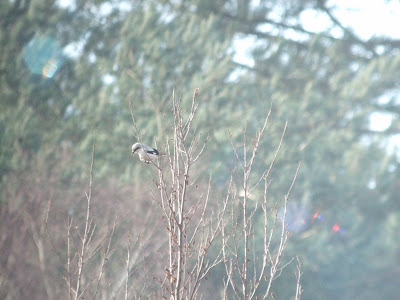 We quickly got on the shrike and I managed to "digi-scope" a couple of photos,no sign though of the Woodlark that had been seen that morning.
Next stop was Holme for Long Tailed Duck and from a sheltered position in the dunes out of the biting wind we were soon on to several togethor with some of the common wader species.
We checked the fields as we travelled for partridges which seem to be getting scarcer and I managed to "digi-scope" an obliging pair of Egyptian Geese much to the ridicule of my three companions. 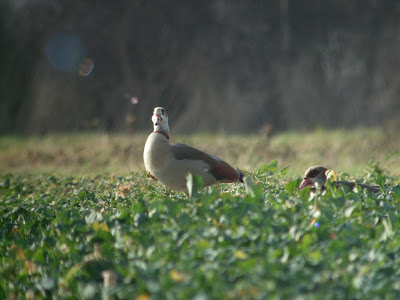 We also called into Thornham which has been the most reliable site for Twite in recent years but sadly they are few and far between this year togethor with Shore Lark.
Our final stop was the RSPB reserve at Titchwell which although over-run on a Saturday is still a great place to visit and one of my favourite reserves.
The walk out along the main path to the beach gave us some good birds including Spotted 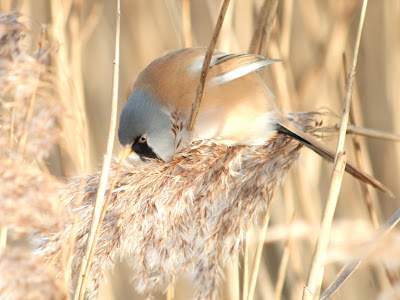 Redshank and Ruff and a pair of Bearded Tits in the nearby reeds attracted much attention.
There were several groups of geese grazing on the marsh on the way out and a scan of the Bren 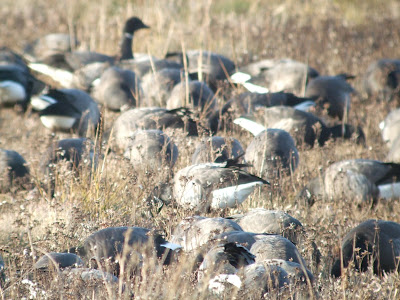 ts gave us a Black Brant,there were also some quite near Black Tailed Godwits on the scrapes which looked fantatic in the sunlight. 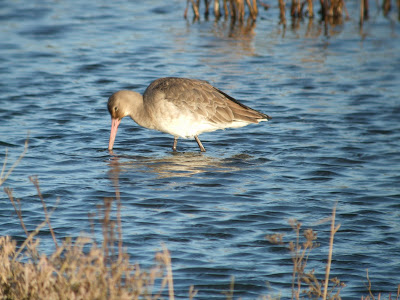 At the beach we picked up a lot of the common waders such as Sanderling,Dunlin,Grey and Ringed Plovers and Turnstones and Wayne called a fly-by Great Skua which I failed to get on as I was too busy "digi-scoping" a very tame pair of Snow Bunting picking through the beach litter. 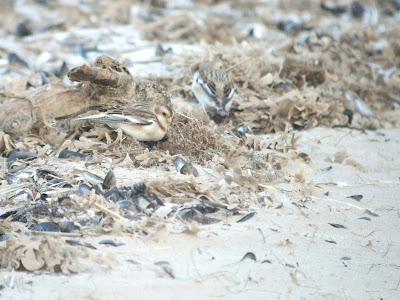 With dusk approaching we decided to see out the remainder of the day at Titchwell and picked up several Woodcock flying out of the woods onto the fields to feed.

Another dry day greeted us on Sunday (1st Feb) and after the obligatoty "Full English" we were soon at Cley watchting the juvenile Glaucous Gull in a blizzard,too bloody cold to hang around so after an unsuccessful scan of Arnold's Marsh for Water Pipit we headed inland to Leatheringsett in search of the continental Black-Bellied Dipper which has been spending the winter on the River Glaven.

No sooner had we arrived when another birder/photographer rushed up to the Jeep to announce that the bird had arrived in the last 20 seconds !!,luck or what ??

We all got good 'scope views and the bird duly obliged for a couple of not very good photos. 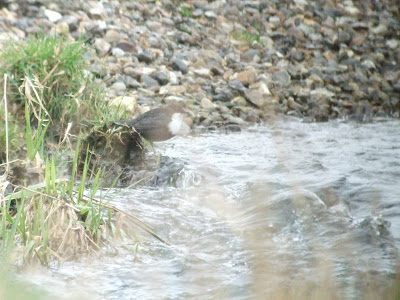 After a quick visit to Cley Spey a report of four Waxwings in Sainsburys car park had us scurrying for North Walsham south of Cromer,the blighters were nowhre to be seen so after a good search we headed for Cromer for another sea watch from a very cold and windy pier.

Lots of Razorbills,Gannets,Kittiwakes and both Red and Black Throated Divers wasn't a bad return and we decided to finish the day at Warham Greens with the harrier roost.

A number of Marsh Harriers passed through adding to the many we had seen already and finally a cracking male Hen Harrier and a "ring-tail" put in an appearance.

Too cold to hang about and with the light fading we moved on to thaw ourselves out in front of the roaring log fire in the Red Lion in Stiffkey with a pint of the best local brew.

Back to the King's Arms for the evening where Alan,Gareth and Mike who were staying at another B+B in the village joined us for a meal and a few pints as they had 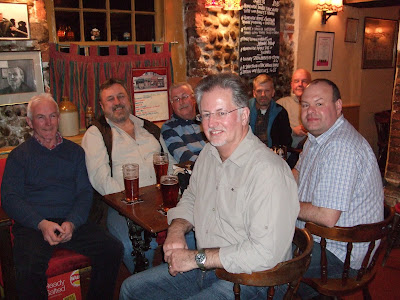 Our final day (Mon 2nd Feb) was to be cut short by the threat of heavy snow,we woke to a covering of snow and headed west for Choseley Barns in the hope of maybe a Corn Bunting only to be greeted by a distinct lack of birds.

The side roads were getting clogged up with snow so sticking to the main roads we headed for Flitcham and Abbey Farm via Wolverton (again no Golden Pheasant - I've only seen one in 7 visits to Norfolk !!) 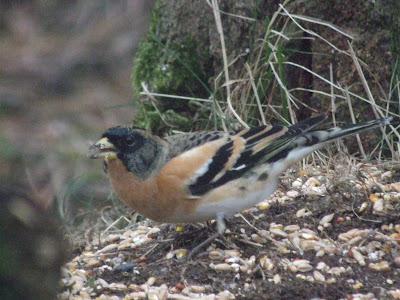 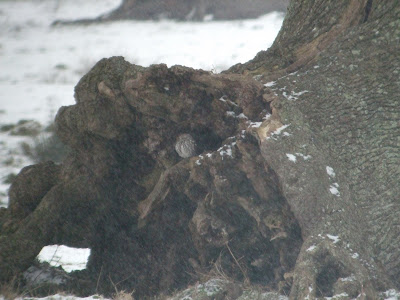 With the threat of heavy snow forecast for South Wales and not wishing to end up standed we headed for home.

A great weekend once again,great company (thanks to Alan,Gareth and Mike as well),good birding,good digs,some of the best beer in the country and a "lifer" thrown in,doesn't get much better.

Roll on May and a summer visit for Orioles and Monties !!