Having dipped spectacularly on the Perthcelyn Great Grey Shrike (twice), I turned my attention to the bird reported near Parkend, in the Forest of Dean. Gill came along, having only seen the Maesteg Mountain bird before (4 years ago).
This bird was very showy, and eventually was in the top of a tree approx 50 metres from the admiring hoards (well at least 20 of us) 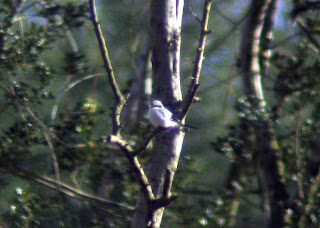 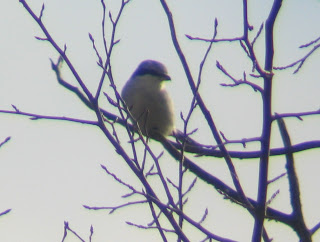 Flushed with success, we went to Parkend Church, where the Bignoses had popped out to Sunday lunch, so off to New Fancy View, where we had our pick of at least 4 Goshawks, within a few minutes of our arrival.
Soon, they went into the woods, and it started to drizzle, so we went to have lunch at Beechenhurst Visitor Centre thingy. As we left, in improved weather, a Green Woodpecker flew over, and a Nuthatch on the roof of the building showed it's orangey and white under tail coverts well, to Gill's fascination.
Back at Parkend Church, 3 Hawfinches showed immediately, a few yards from where I photographed them about three weeks ago. Gill was delighted with excellent views, so much so that she slept most of the way home! 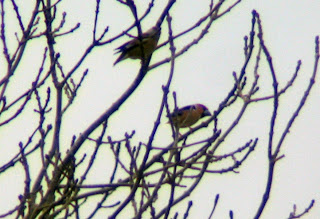 Today, I finally succumbed to the temptation of the possible Pacific Diver in Pembrokeshire, and a brisk drive down was enlivened by 3 Red Kites near Whitland.
If I'd known how far the bird was from the car, I'd have taken my lunch with me! After a squelchy walk to the hide, I was soon looking at the bird. If it's a Black Throated, it's odd. If it's a Pacific, it's not as distinctive as the Yorkshire bird. On balance I think it is more likely to be Pacific, but I think it could well not be accepted, as there is some doubt. 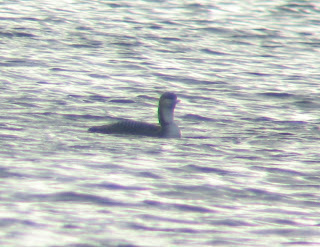 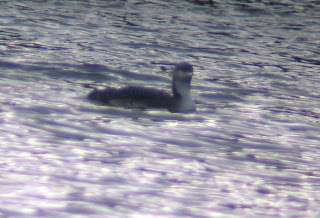 On the way back to the car, I picked out an adult Iceland Gull (I'd only seen juvs before), very nice indeed! 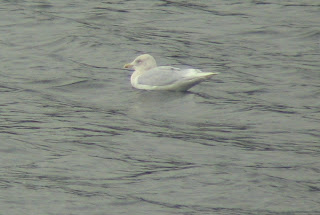 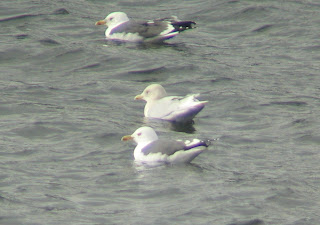 I had a day out with the kids today, but managed to squeeze a little birding in too. First stop was Cardiff Bay, and I was watching Non and Alec on the roundabout in the playground with one eye, while the other eye was gazing on a nice male black redstart. After filling up on lunch, Non dozed off in the back of the car as we headed off for Ponsticill Reservoir. Kevin Hughes was present but the only a handful of gulls had come in to roost. After about an hour's wait, with Non still asleep and Alec busy listening to The Killers, the Iceland gull appeared. That's the fifth lifer for me this year, should the Pembrokeshire diver pass its test. I left at around 4:20pm and have just read BirdGuides which shows another two birds showed just after I left.
Posted by Wayne at 2/18/2007 08:26:00 pm 5 comments:

The hunt for the Great Grey Shrike

Having arranged with Kevin Hughes on our way back from Norfolk last week to look for the recently found Great Grey Shrike near Perthcelyn I set off from home bright and early and met up with Kevin in Ferndale at 7.45am and by the time we had driven over Llanwonno to the site it was 8.00am.We were greeted by a crisp but sunny morning and there were already two cars parked up one of which we recognised as belonging to Martin Bevan who had told Kevin the night before that he was making an even earlier start!
Sadly Dan and Wayne were both unable to make it having prior family committments.
Tim pulled up just after us and the three of us walked the 1 mile or so out to the site.
Howard Oates greeted us and advised that Martin had gone to check another nearby clear felled area,Martin returned a little later with negative news.
The shrike was not showing but we were soon on to both male and female Crossbills feeding at the tops of pines the male looking particularly stiking in the winter sunshine,there were also Siskins feeding and the "buzzing" call of Redpolls were everywhere,when they kept still for a moment they gave superb 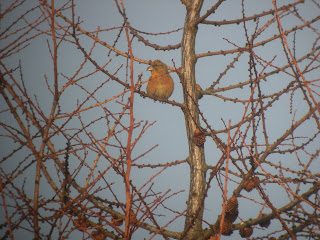 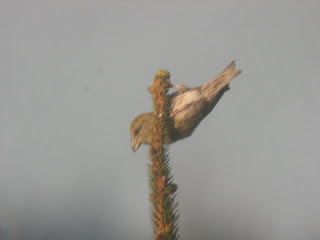 We were soon joined by Alan Hughes and shortly after by a lady birder from our neighbours in Gwent,Siskins and Redpolls came and went and Tim left at 10.00am as planned to get home to meet friends.

A pair of Bullfinches passing through the trees looked slendid in the bright sunlight.

Martin also disappeared to look for the elusive male Hen Harrier that had also been seen in the area (Martin had already seen the shrike not long after it was discovered) and the early sunshine also disappeared for a slight breeze to get up and a chill was felt by all.

Kevin who was on call with his work over the weekend received the dreaded phonecall and had to leave hoping to return later.

Our little gathering was further supplemented by the arrival of Paul and Diana Bowden with Mark Duttfield,it was beginning to feel like one of our GBC field trips!!

We were all starting to feel the cold and a great sense of frustration when at 11.15 after almost a 3 hour wait both myself and Alan spotted the shrike fly from behind us to the top of a nearby tree to our left,we raised the alarm and soon all the group were all enjoying splendid views as the shrike dropped and flitted from tree to tree. 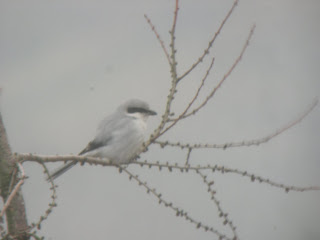 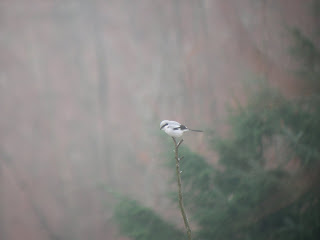 The shrike performed well for about 1/2 hour and Howard was particularly pleased with the sighting as it was a "lifer" for him,counting back I think it was my 5th in the UK with a few more seen on the continent and a "Southern Grey" variety of the species seen on Gran Canaria.
Lots of photos and video were taken which will no doubt turn up on the GBC website pages at some stage and with Common Buzzard,Kestrel and a pair of Ravens also passing over a great morning's birding was had by all.
Posted by Jeff at 2/18/2007 08:18:00 pm 2 comments:

Recent reports of several Bignoses viewable from Parkend churchyard lured me into darkest Gloucestershire. As soon as I had the scope up, the first Hawfinch was visible in a treetop. Following the path down to Parkend Beeches, I realised that approx 8 of them were present, including 3 in my bins together. After a while, I headed to New Fancy View, where I was astonished not to be cold!
It was mild, and completely calm. An hour and a half later I had only seen a few Siskins and about 6 flypast Crossbills. It appeared to be too calm for raptors (no sun to create thermals).
A quick trip to Brierley produced no interesting finches, but a pair of Marsh Tits were welcome. At Cannop Upper Pond, a pair of Redpolls, many Treecreepers, and a Willow Tit about 30 yards downstream from the bridge were soon found.
Stopping the car for a moment by Cannop Lower Pond revealed a pair of Mandarins, the male looking ridiculous (as they usually do!).
I returned to New Fancy View, and was pleased to feel a slight breeze. Sure enough, a pair of Buzzards appeared and a few minutes later, a Goshawk showed, but fairly distantly. It was soon joined by a second, smaller bird, presumably a male. They soared together, and then tumbled, locking talons briefly. Nice!
After the excitement had died down, a stunning male Crossbill showed well below the platform until I focussed the camera.... A Hawfinch flew over, calling.
I popped back to Parkend, and immediately found 5 Hawfinches in view. 3 of them stayed long enough for some poor photos to be taken. 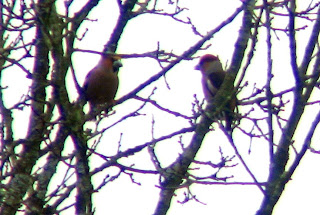