Having missed out on the jaunt to Staines Moor the previous Sunday I was particularly keen to catch up with the Brown Shrike which as for a lot of birders was also a "lifer"for me and I couldn't let the lads get one up on me could I ?
Whilst talking with "Smudger" (Richard Smith) that well known Glamorgan bird photographer during the week about digital SLRs and "big" lenses (I'm about to take the plunge !!) he mentioned that he quite fancied going for the shrike and a telephone call on Sat 24th Oct reaffirmed his interest.
We struggled to get anyone else interested as lots had already seen the bird and others were unavailable for one reason or another and so early on the morning of Sun 25th Oct we headed east up the M4 hoping that the bird was still there.
We needn't have worried,a quick check with Birdguides confirmed that the shrike had been seen early morning.
My trusty sat-nav soon got us parked up in Hithermoor Road and a couple of birders walking back to their car informed us that the bird had been showing well but distant at the back of the scrub area.
The operative word was "had" as with several Joe Public walkers crossing the area the bird had since gone to ground.
We joined about 30 or so other birders and waited for the shrike to show and waited and waited and wai............................
Five Rose Ringed Parakeets dashed above us and broke the monotomy as did a small group of Redpolls.
We waited and the mood turned to anxious,were we to be disappointed,the bird showed briefly at the back of the scrub !!,Richard got on it quickly - did I,naaaarrrr!
It showed again and I had a good look at it through someone else's 'scope just to be sure of a "tick" before finding it for myself,it was distant but settled and I managed a couple of distant digi-scoped 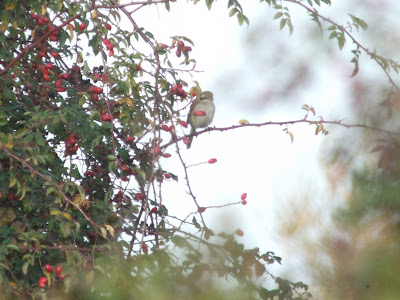 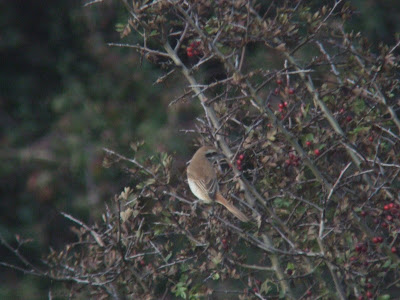 The bird disappeared again for a short time and then started to move around the scrub area getting as close as about 70-80m and giving some good 'scope views,still not close enough for some good pics but allowing a few more record shots. 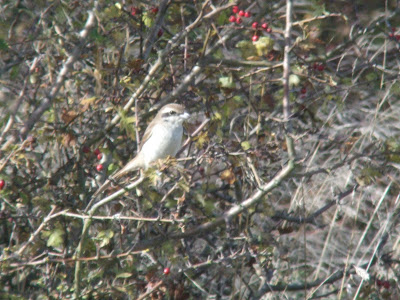 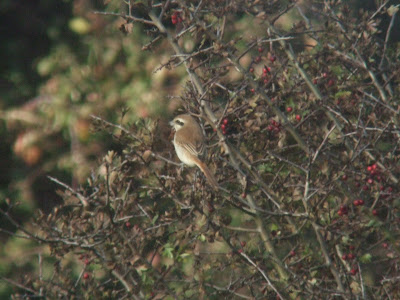 This was an absolutely cracking bird and well worth the 2 1/2 hour wait for a good view,the mood had been a little fractious to say the least with birders jostling for position but wi 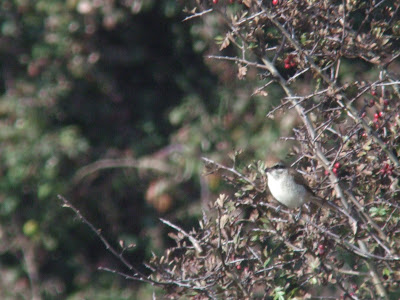 th everyone getting a good view the mood soon lightened to one of relief,"lifers" all round for most ! 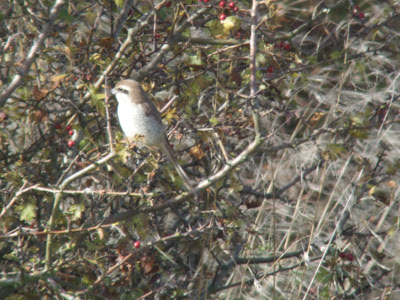 We "filled our boots" with some great views and decided to call time at about 1.15pm and head back to the Jeep for a well earned sarnie and cuppa with a bit of impromptu SLR tuition thrown in (cheers Rich !)
With not a lot else around in the vicinity we decided to head back down the M4 with a call into Aust Warth between the two Severn crossings to check out whether or not the regular wintering Short Eared Owls had started to return.
A small group of local birders who I've seen there before advised us that one had been seen in the past few days and so we gave it an hour or so before abandoning our quest due to the heavy squally showers and heading for home.
A great day out and excellent company,what "Smudger" doesn't know about Glamorgan birding is not worth knowing.
Ok,we had to wait a while but were then teated to some superb views of this "mega" shrike.
Posted by Jeff at 10/29/2009 07:49:00 pm No comments:

As you've no doubt realised, we haven't been out much lately. It appears to be an annual Birders in Boxers tradition by now to be stuck a). indoors b). in work c). with family* (delete as applicable) during the autumn. You've only just got a better chance of seeing us in the field than an Ivory-billed 'Pecker. We're now a BBRC description species.

It was quite a considerable achievement therefore that three of us (Kev, Wayne and myself) managed to find ourselves on our way to Staines Moor yesterday. We would have been four, but the Boy Birder was ill - he must have been to pass up on a chance of seeing a Brown Shrike.

For "Staines Moor" read "End of Heathrow Runway #1". A nice bit of habitat in a very built up area, but local birders must spend most of their time birding by sight rather than sound because of the constant roar of aircraft overhead which seemed to be taking off at a rate of 1 every 90 seconds. 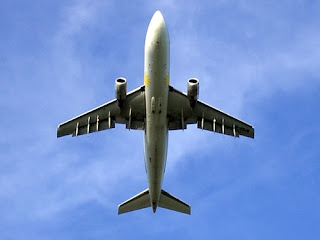 A typical view while birding on Staines Moor

Despite the noise the Brown Shrike appeared happy enough in its choice of site. It was showing when we arrived and, although it disappeared from view every now and again, put on a good show. 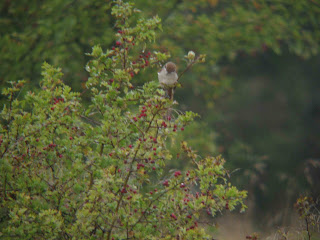 The photo above is a bit distant but I'm sure you'll be able to pick out all the salient ID features in the close up photo below. 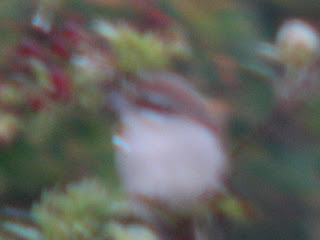 I'm sure you'll agree that his is clearly a Brown Shrike!

Having easily bagged the shrike - a lifer for all of us - we had plenty of time to kill. We briefly toyed with the idea of going for the Red-flanked Bluetail at Minsmere. That was slightly out of our range for the day, so where could we go to 'top' "Heathrow Runway #1"? Easy - Didicot rubbish tip.

And so it was that an hour later we were scanning the fields around the rubbish tip for the Azorean Yellow-legged Gull that had been seen there lately. There were plenty of gulls but no sign of our gull amongst them. So we switched our efforts to a pool just oustide the tip. Overhead I counted at least 34 Red Kite which nearly made up for the unpleasant surroundings.

There were a few hundred gulls on the pool with plenty more coming or going. We gave them all a good 'grilling' (well, a light 'toasting' at least) but there was still no sign of the atlantis. On the other hand, there was another gull there which certainly deserved some more attention. Over the next half an hour we gave it a good going over and noted the key features needed to allow us to positively identify it as a 1st winter Caspian Gull. An unexpected lifer for all of us.

Seeing the Brown Shrike was obviously very special. But, somehow ticking this gull, although regularly seen in the UK now, gave me a lot more satisfaction. I'll think I'll be thumbing my Olsen & Larsson more often in future. Oh, and if you're looking for me, I'll be down Lamby Way Tip.