Whilst on the Pembrokeshire Bird Club sightings blog early last week I noticed Richard Crossen's post of a few available spaces on the Celtic Wildcat for the last couple of Sea Trust (West Wales) cetacean survey pelagics one of which was going out of Neyland Marina on Sat 19th Sept.
Teresa didn't take much persuading for a day out dolphin watching and a positive resply to my e-mail to Richard meant an early start.
We left Maesteg at 07.00 and quiet roads soon had us arriving at Neyland at 08.30 in time for a cuppa at the marina cafe before meeting up with Richard and his lovely wife Sarah and our fellow participants at 09.00 ready to sail at 09.30.
Unfortunately Cliff Benson was a little "under the weather" and not able to make the trip.
I'd been on several of the GBC Celtic Bird Tours pelagics on the Sabre Tooth before from Neyland so new what to expect although with no chumming and cetaceans being the main target any quality birds would be a real bonus 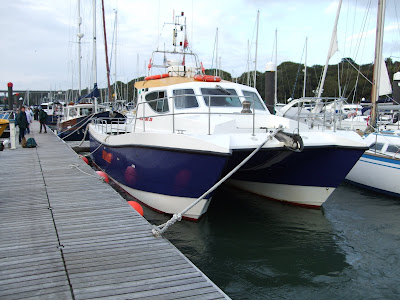 We were soon underway and once outside the speed restriction area the boats twin 300hp motors kicked in and in just over a half an hour we were out of the sheltered haven and into open water.
Just offshore passing Freshwater West we spotted 3 unidentified cetaceans which I think were Harbour Porpoises but they were a long way off and only gave brief views.
We headed out to survey an area heading into the Bristol Channel towards Lundy Island. 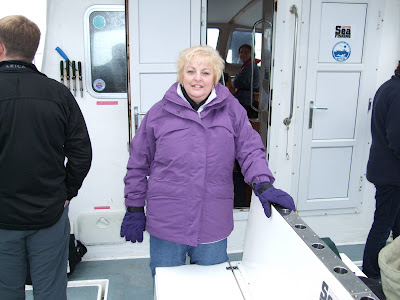 .
The first couple of hours were quiet and pretty uneventful,we came across a trawler with a host of seabirds gathered around it and hoped that maybe a skua was amongst the throng,sadly they were mostly gulls and gannets. 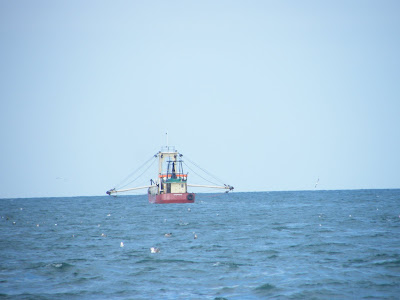 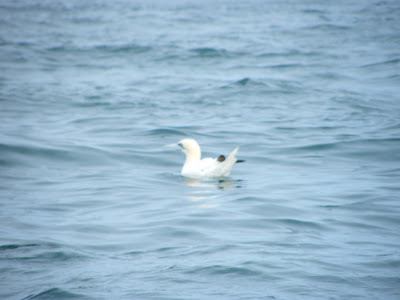 At between 11.30-12.00 a shout went up and a small party of Common Dolphins were heading towards the boat to "bow-ride",everyone grabbed their cameras and jostled for position as these enigmatic mammals treated us to an amazing display. 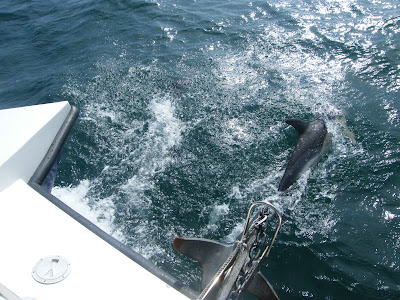 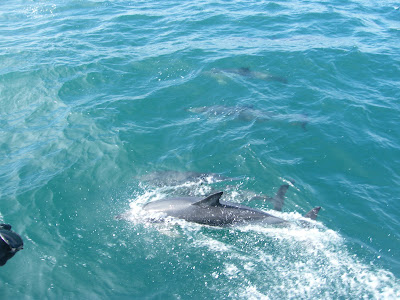 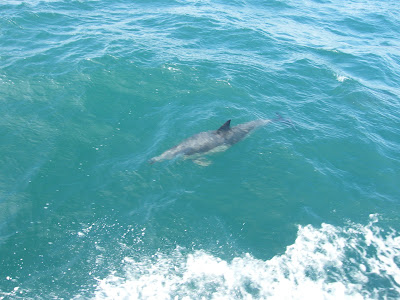 This was to be the first of several pods that came to visit our boat that afternoon and it wasn't so much a case of us finding them ,but them finding us !!

About half an hour later another pod of about 20 animals came in and they stayed with us riding the bow-wave for up to 15 minutes giving everyone a really good photographic opportunity. 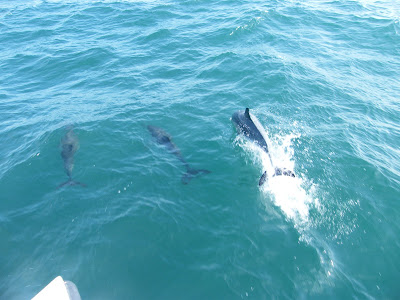 We steamed on towards Lundy and the weather really opened up into a fine sunny day and soon it was time for the hardier souls amongst us to discard the fleeces and big jackets.

Lundy came into view and although it looked only a couple of miles away I was reliably informed by Nick our skipper (what a great guy !!) that the closest we reached was 11 miles. 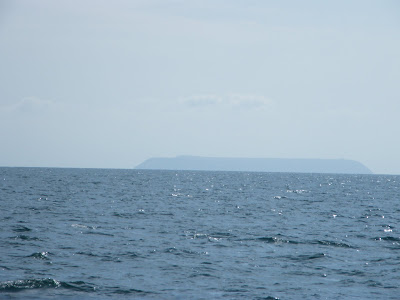 Apologies for the sloping horizon but our boat was listing to and fro in the slight swell.

More pods came into the boat at regular intervals and although they brought immense pleasure I think that deep down we were all hoping that the large pod of Fin Whales that had been seen by the lucky few from the boat on 13th August were still in Pembrokeshire waters.

I guess that really was a "once in a lifetime experience" and something that the passengers on that day will never forget. 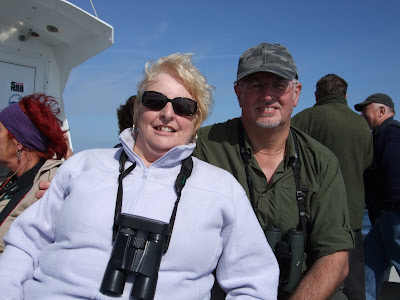 At mid afternoon we changed course and started to head back slowly to Milford Haven,the weather was truly glorious and the sea probably as calm as it gets,I think even Wayne would have survived this one !! 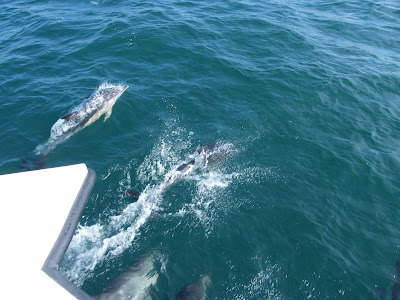 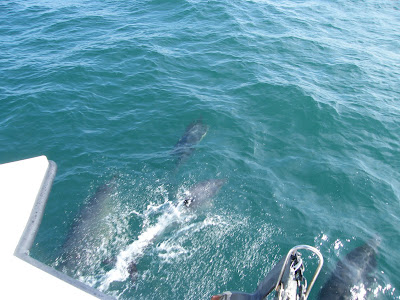 Unfortunately my super-slow focusing Fuji "bridge" camera wasn't allowing me to get the best of shots and I was secretly well envious of the serious photographers on board with their super-fast digital SLRs and big lenses.

A chat with Janet Baxter on the way back to port who was taking some fantastic photos confirmed that I should be looking to invest in a Canon 40D with a 100-400 IS lens,I know I'm going to have to indulge and it's only a matter of when,I'll just have to work my way around Teresa !! 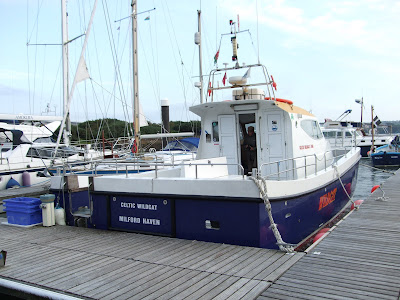 By 17.45 we had docked back at Neyland and a fantastic day had come to an end,okay we "only" saw Common Dolphins but to see them in such numbers and so close to the boat that you could hear them "blow" when bow-riding was unforgetable,I believe the final tally was approx 122 !!

Both myself and especially Teresa thoroughly enjoyed the day and would really like to repeat it next year if places are available.

Huge thanks to Richard and Sarah,Nick our skipper and our fellow passengers for making us so welcome and giving us both a day to remember.

An early start on Sunday 13th Sept saw me meet up with Kevin in Cardiff and with Dan working and Wayne unavailable with family committments we were soon winging our way over the Severn Bridge to Somerset to catch up with the Spotted Crake which has been at the RSPB Greylake Reserve on the Somerset Levels for a few weeks.
Crakes are a big gap in my UK list and so I was keen to see this bird which has been showing well on what is quite a small pool on the reserve.
We arrived at about 08.30 and after a short walk we joined three other birders who were already on the bird.
The bird picked it's way around the pool sometimes dropping out of sight but when it did re-appear it gave me a good digi-scoping opportunity in quite bright sunlight.
A "lifer" in the bag and with little else around we decided to head for Meare Heath not that far away to pick up a couple of Little Stints that had arrived there the day before and anything else which may have turned up.
We soon arrived at the car park and after a walk along the path running beside the main drain we were soon on a couple of juvenile Little Stints in fresh plumage with the white back "braces" clearly visible feeding on the scrape,unfortunately they were too distant to photograph even at 60x on the scope.
A couple of juv Ruff were a little closer though and I managed a couple of snaps.
As we watched a single Spotted Redshank flew in and fed on the muddy scrape.
We walked to a few other areas of the reserve but it was generally quiet with little of real interest although the sightings book at Noah's Hide where we had seen the Whiskered Tern from a few years ago held notes of Osprey,Hobby and Marsh Harrier all in the same few hours just days earlier and also regular sightings of Otters,unfortunately we saw nothing that made us want to pick up the pen.
With mission accomplished and a "lifer" for me under my belt and little else around in close proximity not even at Slimbridge we decided to head for home.
Posted by Jeff at 9/20/2009 07:47:00 pm No comments:

What's the plural of Ibis,Ibiss just doesn't look right !!
With Wayne unavailable due to family committments an early start on Sunday morning 6th Sept saw me meet up with Dan and Gethin at our usual meeting place at Sainsburys' car park at Junc 36 on the M4 before headed West to try and catch up with the group of 10 Glossy Ibis that had recently arrived near Burry Port/Pembrey.
A pull in at the Harvester at Llandarcy saw us pick up Kevin and within half an hour we were driving down the road alongside the Shoreline Caravan Park where the distant figure of Robbie Taylor taking photos with his snazzy digital SLR and huge lense confirmed that the birds wre still there,more than that they were only some 10m or so from the edge of the road feeding in a small flooded hollow !! 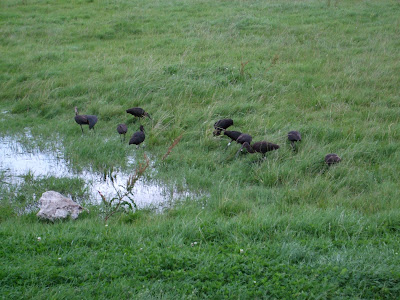 We piled out of the Jeep for a good look at the birds,a quick count confirmed that the 10 were still there.
I had taken the camera hoping to digi-scope the birds at some distance,I hadn't bargained for almost being able to poke them with the end of the tripod and had to "back up" across the road just to be able to get the birds in the frame !!! 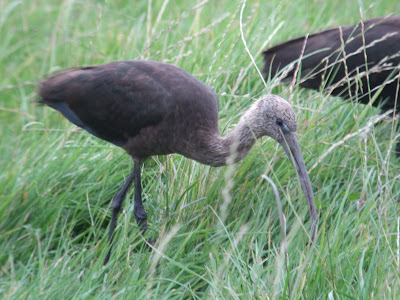 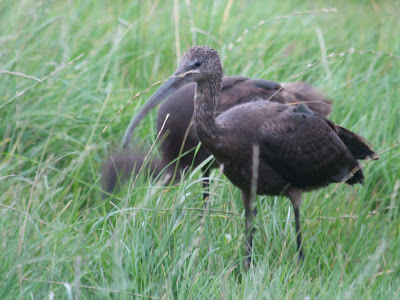 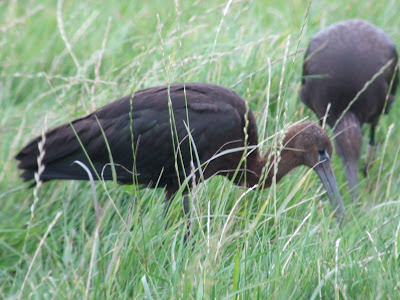 A passing jogger put the birds up and they flew to the far side of the field just after Brian Thomas had arrived to join us.
There was a large gull roost out on the sand spit so we thought we'd che 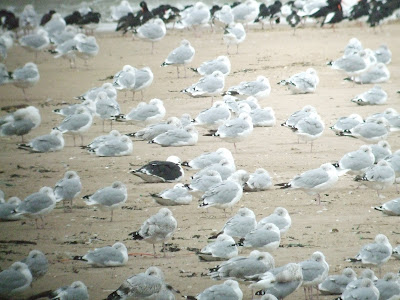 ck it out hoping that the Glossies may have returned by the time we walked back to the car.
The large gull roost held mostly Herring,Lesser and Greater BB and a few Common Gulls but nothing more exotic.
A little further along the spit a flock of about 30 Ringed Plover foraged amongst the shingle. 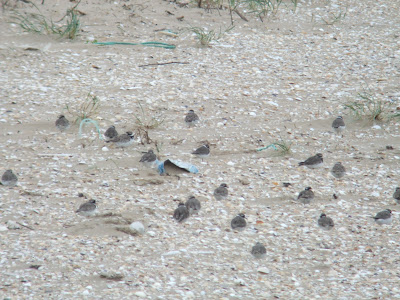 Eagle-eyed Geth aka "The Twitchmeister" spied a distant Kestrel perched on a piece of driftwood until flushed by some numptie dog walkers. 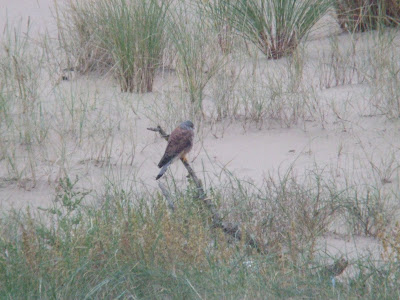 Unfortunately our morning was cut short as Kevin who was "on call" over the weekend with his job received the dreaded phone call and we had to leave.
A scan of the shoreline on the way back to the car picked out a couple of Med Gulls in the d 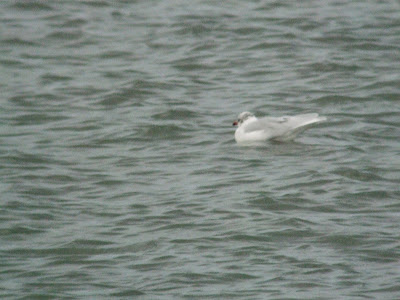 istant group of BH Gulls.
As we arrived back at the car park we were informed by Robbie and Brian that the Glossies had taken flight again and this time were last seen disappearing West in the general direction of Ashburnam golf course but having checked the various sightings pages on the 'net looks like they returned shortly after to give great views.
We dropped Kev off at Llandarcy and a quick call into Eglwys Nunnydd failed to produce any terns although the wildfowl numbers are increasing and Ogmore was similarly unproductive with little there to get excited about.
Geth has yet to see RL Partridge so we doubled back to Tythegston where a scan of several fields also proved unproductive and the only birds of interest were two perched up Common Buzzards and a couple of Stock Doves that flew up off a stubble field.
No "lifers" today even for "The Twitchmeister" but a "Welsh" tick for the four of us.
Posted by Jeff at 9/06/2009 08:30:00 pm No comments: