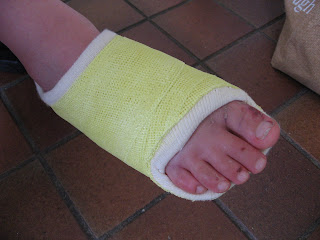 OK - it should be 'Lesser Yellowfoot' but that would have been an even crapper title! As you can see from the photo above the Boy Birder has broken his foot and so won't be charging around after rarities for the next six weeks. He broke it on the last full day of our holiday down at Whitesands near St. David's. He's cracked one of his metatarsals so perhaps for the next few weeks he should be know as the 'Boy Beckham'. 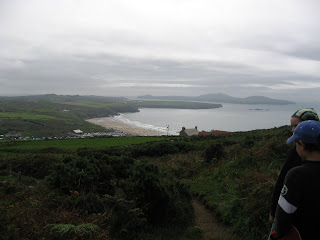 We stayed in the Youth Hostel at Whitesands - the view from which you can see above. That's Ramsey Island in the distance. Birding was quiet. Seawatching only came up with Gannet, Shag, Fulmar, Kittiwake, Common Scoter and hundreds of Manxies. Also some distant views of Harbour Porpoise. The Grey Seals had also started pupping. On land the 'highlights' were Chough, Peregrine (patiently chasing a Ringed Plover until it nonchanantly picked it off when it got knackered) and Red-legged Partridge.

On Tuesday night a shout came from the sitting room . . . "Can we go and see the Stilt Sandpiper?" Geth had snuck onto BirdGuides behind my back and was checking out what was about.

And so, the following morning found the two of us at Coombe Hill Meadows Nature Reserve in Gloucestershire yomping through mud and flooded fields in search of a lifer for both of us. We were told that the bird had flown from the Gunton Hide to the 'Long Pool'. Another yomp of a half a mile or so. The bird wasn't showing there either and the hide was packed (and as hot as a sauna) so we hung around outside waiting for the bird to show. Within ten minutes out charged Lee Evans, irritated that nobody knew where the bird was. Off he went back to the Gunton Hide where he duly rang back with the news that the bird had been re-round. The hide emptied as faster than Usain Bolt out of his blocks. 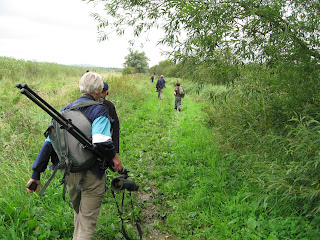 Geth charging back to the Gunton Hide

And so it was that the Twitchmeister met the Twitchmeister. We were packed into the Gunton Hide like sardines with Lee in the front providing a running commentary on where the bird was. It was proving difficult to see because it kept on moving behind some tall grass. Geth was beginning to lose it so I called out to Lee to ask whether he'd be willing for the Boy Birder to squeeze through to have a look through his 'scope. He kindly agreed and so the Geth saw his first Stilt Sand through Lee Evans' scope! 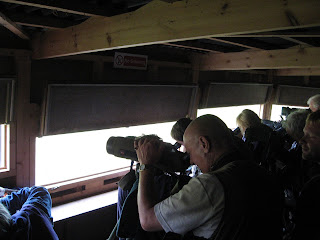 After a while the Stilt Sand moved out into the open, people got good views and the hide gradually emptied, leaving both Geth and me to enjoy the bird at our leisure. 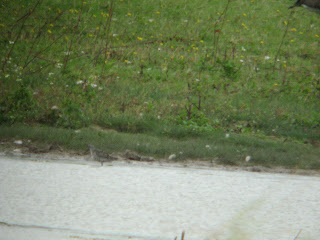 Photography don't get much better than this!

After we'd had our fill of the Stilt Sand the hide's attention turned to finding the Wood Sandpiper that had been seen there that morning. We all searched for about five or six minutes when the shout went out "I've got it!" It was Geth. Of all the guys in the hide he'd found the bird standing motionless on a muddy bank. Lifer number two of the day for the boy (#184). 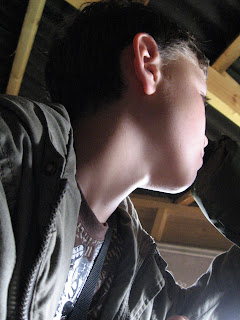 Geth picking out his second lifer of the day.

This was a nice reserve: it also had Black-tailed Godwit, Ringed Plover, several Green Sands, Little Egrets and sadly the obligatory dozens of Canada Geese. It obviously has good potential for rarities - if only we had somewhere similar in Glamorgan.

To complete a very good day we visited Saul Warth on the way home where we duly found the Red-necked Phalarope (lifer number three of the day for Geth, #185) as well as some more Black-tailed Godwits, Greenshank, Lapwing, Redshank, loads of grotty looking ducks and a Kingfisher.

A cracking day. If you're going to Coombe Hill Meadows - take your wellies.

Although Gill is usually quite happy to see whatever birds she encounters, she had said that she would like to see a phalarope if one was around. So, when one settled at Saul Warth, Frampton, we decided to head up there on Sunday 17th August. On arrival at the car park, an Autumn plumage Kevin Hughes appeared (a year tick for me!), and confirmed that the bird was still present. Sure enough, after walk along the canal bank and a scramble up the muddy embankment, we joined a reasonably large group of birders, many of whom were already looking at the Red Necked Phalarope, which was showing quite well, but distantly. Gill watched as it picked at the surface and spun a bit, in typical phalarope fashion. A couple of Green Sandpipers and a Wood Sandpiper were also present amongst many other common waders. We then headed to Slimbridge where Gill and Rosie explored the new playground (and decided that it is excellent!) 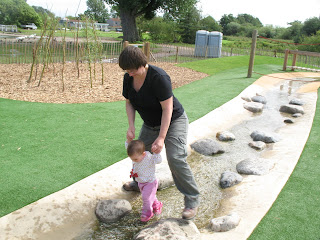 whilst I investigated the hides. 5 Green Sandpipers showed from Robbie Garnett Hide (yes, I know that only 3 are visible in the picture) 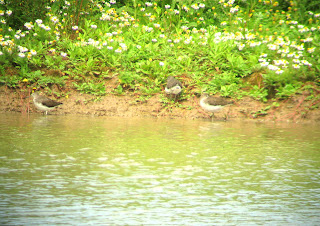 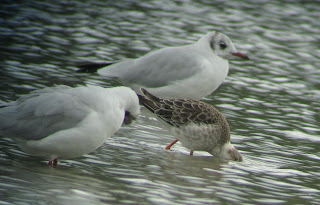 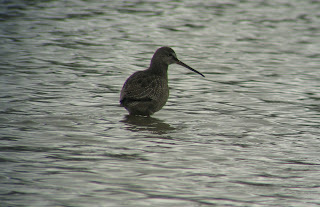 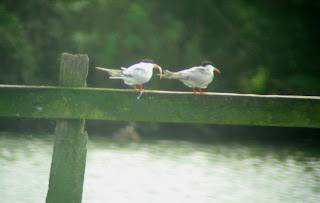 and a Black Tern 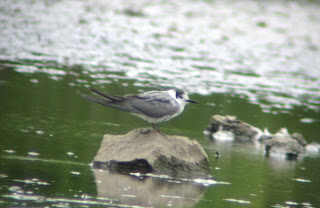 showed on South Lake. Gill fancied walking to Mid Point, not ideal with Rosie asleep in the pushchair, and VERY few birds visible at all when we got there, but at least we can say we've been now! 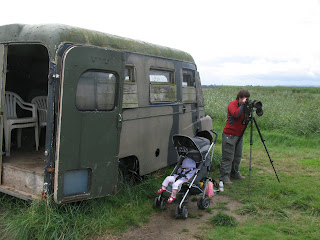 There weren't many to be had in the last week in July in South Devon.
Sunday 27th was hot and sunny, and Thurlestone Golf Course obliged with decent butterflies: Clouded Yellow, Painted Lady, Grayling, Wall and Small Copper all obliging.
I did manage a lifer on Weds 30th, about 6 Corys Shearwaters close in from Thurlestone, during a blow that saw large numbers of seabirds along that coast. There were a couple of Manxies also.
An early morning visit to Prawle Point on Friday 1st August soon brought a token Cirl Bunting, a couple of Kittiwakes were the highlight of an hours seawatching.
So here's a consolation steam loco or two: 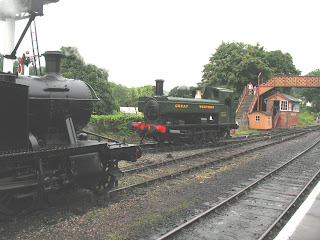