The celebrities were queing up to have their photgraphs taken with the Twitchmeister at this year's Bird Fair at Rutland. 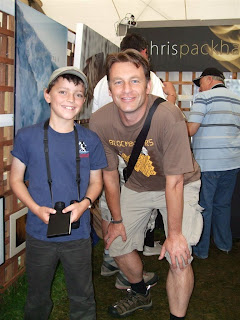 Who's the guy on the right?! 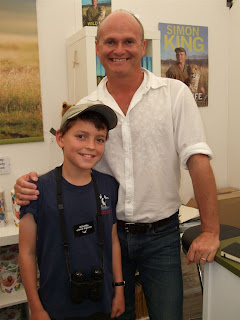 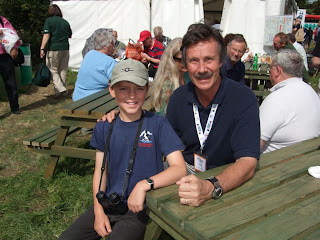 And while Geth was hob-nobbing with the stars Jeff, Kev and I were drooling over the latest gear in the optics and cameras marquees. While we were there the boy birder not only managed to add Willow Tit to his UK life list (#213) he also managed to help ring one. A great day out. 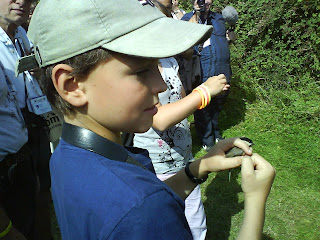 Yes, you've guessed it we've been on pelagic. Well, two of us have - Wayne and I, joined by Penarth's finest, Wayne Strong (who'll be known as Wayne S for the rest of this blog to avoid confusion). 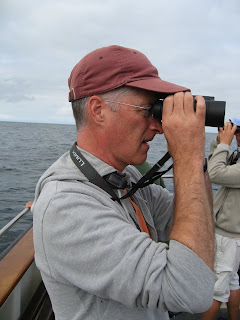 Between Aug 14th - 17th we went on a Celtic Bird Tours (which has now evolved into Oriole Birding) trip to explore the seas around The Isles of Scilly. This is our salty tale of Seabirds, Stugeron and a boat called the 'Sapphire'. 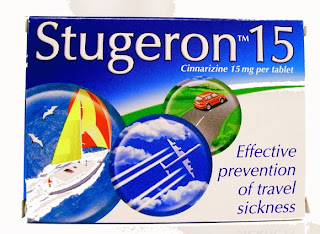 The three of us left Cardiff late on Thursday, Aug 13th to travel down to Penzance. Wayne S had been on a few pelagics before and was completely chilled out about the prospect of spending a long weekend on the High Seas. The same can't be said about the other two, less than able, seamen in the car. There was a distinct whiff of nervousness on the way down as we anxiously exchanged tales of previous experiences of projectile vomiting and various theories on how to avoid the mal de mer.

We stayed the night at Penzance Youth Hostel. Be warned if you're planning a similar trip. It was the only place available to us in the area as all the B&Bs were either full or only accepted bookings for a minimum of two nights. Still, Youth Hostels have moved into the 21st Century and it was a comfortable place to stay. You don't have to bring your own bed linen or do any chores any more. We enjoyed a nice meal and some good beer there and, at £17.50 a night, it's excellent value.

Day 1: We met up up with the rest of the tour (led by Ashley Saunders) on the quayside at Penzance and, on a grey and damp morning, we were soon on the 2.5 hr trip on the Scillonian III to St. Mary's. One advantage of the weather was that it kept non-birders away from the top deck so we had plenty of space to spread out and start seawatching. The usual suspects appeared: Manx Shearwaters, Northern Gannets, Norther Fulmar, Shags and a few European Storm-Petrels. Some Harbour Porpoises and unidentified Dolphins also showed briefly. 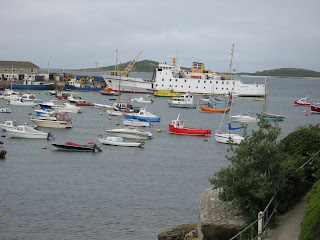 Once on St Mary's were were met by our local leader Dr Bob Flood, along with his colleague Ashley Fisher and the skipper our boat, the Sapphire, Joe Pender. We checked in at our guest house, The Mincarlo (excellent accommodation by the way) and with stomachs full of Stugeron, and our rucksacks crammed with ginger biscuits, we were soon heading out to sea on the Sapphire. 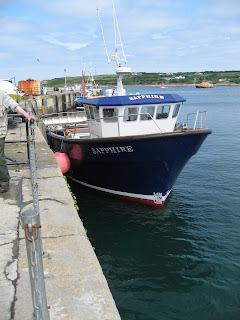 We were on our way east of the islands to the Seven Stones Reef - the site of the shipwreck of the Torrey Canyon back in 1967. Bob started to flick the chum off the back of the boat which immediately attracted a load of gulls, particularly Great Black-backeds, as well as Fulmars and Gannets. The theory was that the presence of gulls etc would act as a visual clue to bring in . . . erm, more interesting birds. We were soon surrounded by European Storm-Petrels - we were to see about 30 of them during the afternoon. 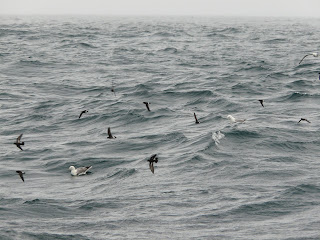 Once we reached the reef the engines were cut and we started to drift and chum. This allowed us much closer views of the Stormies - much better than the distant fluttering dots we're used to seeing from Porthcawl! Suddenly a cry, "Sooty Shearwater!" which came in close and gave us fantastic views. But, we weren't able to enjoy it for long because there came another cry "Wilson's!" The first of three Wilson's Petrels we were to see feeding over the chum slick over the next hour. Steaming back to St Mary's the chumming continued which eventually attracted two Great Skuas to hassle the gulls following the boat. 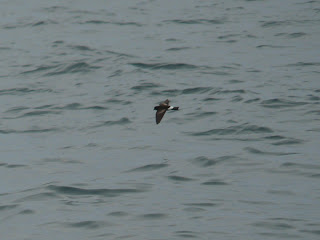 Back on dry land, taxis were waiting for us to take us quickly to Porth Hellick so we could tick off the Lesser Yellowlegs present there before the pubs stopped serving food. And so day one of the trip kicked off with two of our target birds already in the bag and a bonus wader to boot, rounded off nicely with no sign of any seasickness.

Day 2: Not that we were going to be blazé about our new found sea-legs because day two of the trip was an all dayer - 10 hours at sea. Throwing open the curtains at 6.00 the following morning our hearts sank when we saw the decidedly 'lumpy' sea. 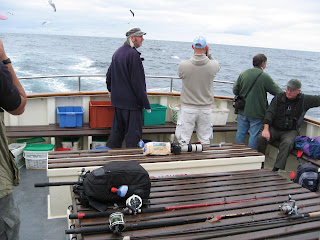 As we steamed 10 miles out to sea the weather improved but the sea swell didn't. Our first drift and chum attracted a decent number of Stormies and a couple of Great Skuas. Joe, the skipper, had set out a couple of rods in the hope of catching a shark and soon his balloon float was skidding over the water surface as his reel screemed. Somebody quipped à la Richard Dreyfuss to Robert Shaw "You're goin' to need a bigger boat!" It took at around 20 minutes to haul the Blue Shark in to the boat (a whopper at at least six feet long and 120lb in weight) before it was tagged and released. 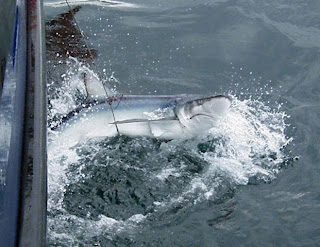 A small fishing trawler was spotted on the horizon and off we set in pursuit. As we approached it a Sooty Shearwater followed us for a while but this one was again overshadowed by the appearance of our first Great Shearwater, which was soon joined by another. We remained alongside the trawler for about half an hour as it pulled in its nets which in turn attracted scores of seabirds. Gulls picked off small fish from the surface while Northern Gannets plunged in deeper. All the while two Great Shearwaters 'sheared' around us and our first Wilson's Petrel of the day put in an appearance. British birding doesn't get much better than this. 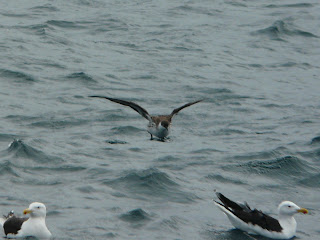 But, things were about to take a turn for the worse. After the excitement of the trawler we cut the engines and started chumming again. We endured what was essentially a 'quiet' hour where, apart from the ever present Stormies, there was little to see. This gives an opportunity for your mind to wander . . . on to how your stomach is feeling. Ever the hypochondriac, I persuaded myself that I was going to be ill and, as a precaution, I took another tablet - too soon after my first one but, "What the heck! Just to make sure. My stomach will be fine after this". I should have read the box. May cause drowsiness it said. May cause drowsiness?! Within 10 minutes I could hardly keep my eyes open and only just holding on to the contents of my stomach. I actually fell asleep three times (mini nano-second sleeps) where I lost control of my body and almost smashed my nose on one of the seats on the boat. Just about holding on to the contents of my stomach it was a relief when we started to steam home. Suddenly, we were surrounded by Common Dolphins. I went up to the bow where I was able to watch some of them bow-surfing below the boat. Brilliant! And the best possible cure for seasickness. 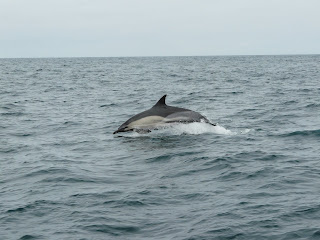 On pelagics it ain't over 'til the fat lady pukes. As we approached the calmer waters of the Scilly archipelago, and we were already contemplating the success of the day, a Balearic Shearwater approached the boat. Listed as critically endangered by the IUCN this bird put on a fantastic show for us - down to no more tha a few metres. We threw small pieces of fish into the sea which inevitably attracted a host of gulls. But, this shearwater was clever enough to dive down under the gulls to pick up scraps which they weren't able to reach. An experience which will live long in the mind. 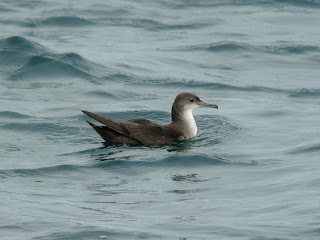 Our third pelagic wasn't scheduled until the afteroon and so the morning was spent birding on land. 6.30am saw Wayne and I at Porth Minnack hoping to find the elusive Melodious Warbler that had been present there for a few days. Wayne S had got there 10 minutes earlier. He saw the bird briefly - we didn't! That'll teach us to have a 'lie in'! But, a few hundred metres up the path at the end of the airfield runway we caught up with the Buff-breasted Sandpiper which had been found earlier in the day. 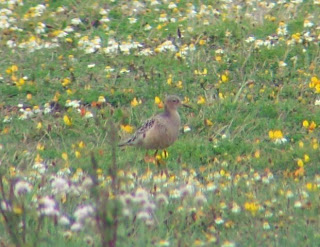 We were due to go to Poll Bank on the afternoon's pelagic. But, in the expert hands of Bob Flood we changed plan. Cory's Shearwaters and Sabine's Gulls had been reported earlier in the day past Pendeen in Cornwall. We'd all but given up on Cory's because they'd been virtually absent form Scillonian waters this year. There was also an unconfirmed report from trawler fishermen of an albatross having been seen that morning too. So, as you can imagine, there was an extra frisson of excitement on board the Sapphire that afternoon.

We obviously didn't see an albatross or you would already have heard about it! But it was another cracking trip. We saw four Cory's Shearwaters close in within half an hour of leaving port; an Arctic Skua; 2 Great Shearwaters; 2 Wilson's Petrels; 2 Sooty Shearwaters and, best of all, a 1st summer Sabine's Gull provided us with a full house of target birds for the tour. To round off the day, yet another Blue Shark was caught and tagged and everybody held on to the contents of their stomachs.

Day 4: No pelagics today but, having dipped on the Melodious Warbler yesterday Wayne and I were at Porth Minnack at first light (6.00am). Two hours later we'd dipped again, although James McCallum, another member of the tour managed brief views. James is a very talented artist and his website is well worth a visit. After breakfast most of the party headed off for Tresco. Having already spent a few hours searching for the Melodious in a difficult to bird, heavily vegetated area, I'd given up on the damn thing. But, almost as soon as we'd landed on Tresco, James rang to say that he was enjoying crippling views of the bird. Bugger! (The bird, not James). My one consolation was that he'd had to wait 4 hours before the bird showed. That'll teach me for being such a wuss. 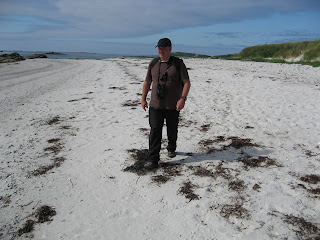 Wayne on Tresco - wishing he was on St. Mary's looking at a Melodious

Tresco was quiet - full of some very posh holidaymakers enjoying the wonderful scenery and white, white beaches. A female Marsh Harrier was the only bird of note. And so that was that. The tour was over apart form the couple of Great Skuas and a few Stormies which we saw from the Scillonian on our return journey to Penzance.

It goes without saying that this was a great trip. The knowledge of Bob Flood, Ashley Fisher, Joe Pender and the other local 'spotters' on board the Sapphire, not forgetting Ashley Saunders, is incredible. They were picking out Wilson's Petrels from a couple of hundred metres away without bothering to use thier bins! Their ability to read the weather and sea conditions and to get the best out of every pelagic trip was invaluable. The birds performed on cue and all in such close proximity to the boat. Sadly, it's back to the reality of seawatching from Porthcawl for all us of us . . . until next time.
Posted by Dan at 8/18/2009 09:59:00 pm 1 comment: