After an anxious day wondering if the recently found Gyr Falcon at Scurlage on The Gower would still be around for the weekend myself and Kevin headed west early on Saturday morning (19.Dec 2009) planning to get there for first light.
Dan and Wayne were unable to join us both having other committments (the fools !!), we duly pulled into Scurlage just after 8.00am and soon found the location on the minor road to Horton.
A loan birder was already at the site having travelled from Bristol that morning and a quick phone call to Colin Gittins confirmed that we were in the right place.
It was bleedin' freezing but the weather conditions were generally good as we prepared to wait for the bird to put in an appearance.
Gyr Falcon has long been on my list of "must have" birds and is probably on a lot of other birders' lists as well,I didn't go for the last "twitchable" bird in Cornwall so this would be another "lifer" and in Glamorgan as well !!
A large pale plastic owl on the roof of a distant farm building due East had Kevin going for a short while as my feet got colder and the numbe 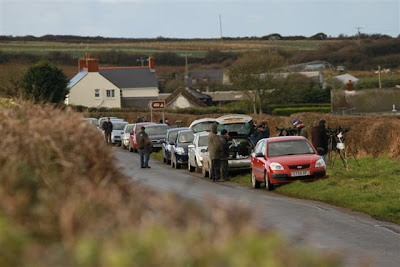 r of visiting birders steadily increased.
The falcon would not go short of food as potential prey was plentiful in the shape of good numbers of Lapwings, Goldie Lookin' Plovers and gulls as well as the more common farmland species.
Each time the large flocks were disturbed the sky was scanned for a glimpse of the majestic raptor. 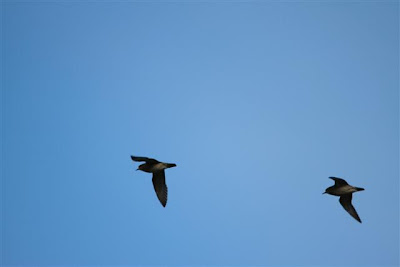 Plenty of Common Buzzards came and went as time wore on and as the weather started to deteriorate the shelter of Kevin's car was a much welcomed comfort.
The band of rain quickly passed and as the weather improved and the sun came out spirits lifted,still no sign of the bird though.
Mid-day came and went,4 hours we had been standing around and the cold was starting to bite.
John Wilson joined us and Martin Bevan,Phil Hill and Martin Bell moved position from their vantage point further down on the main road.
At about 1.15 pm and after a 5 1/4 hour wait a cry went up and the bird we had all been waiting for put in an appearance overhead as it powered past us to come down in a stubble field just the other side of Scurlage.
I picked up my camera and blasted away but the bird although giving excellent binocular views was still quite distant. 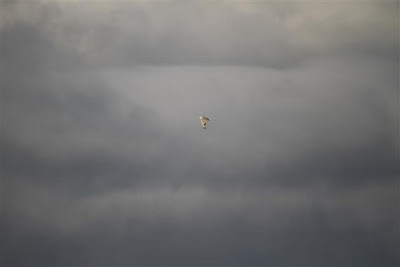 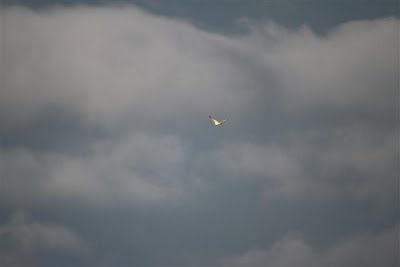 We dived into Kevin's car and with several other birders headed over to the stubble field where the bird had been seen to land,after a short search we headed back to our original location in the hope that the bird would make another "fly through".
We were not to be disappointed and after a superb male Hen Harrier had put in an appearance over the fields (there was also a "ringtail" in the fields behind us but I didn't see it ) another cry went up and this magnificent white falcon powered past us once more,it's shear size and the speed and power of it's flight were awesome as it disappeared over the horizon towards Horton.
A phone call from one of the Cardiff lads (cheers guys) confirmed that the bird had been relocated eating a kill in fields just the other side of Horton and after a frantic mad dash the bird was picked up sitting on a fence post about 100m from the roadside.
I quickly got crippling binocular views but just as I was about to get "that" photo the bird took off again having been mobbed by several crow 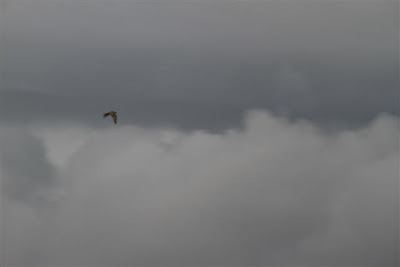 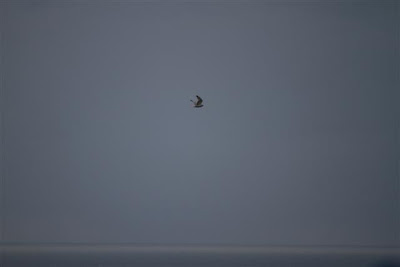 We travelled back to the minor road opposite Bank Farm caravan park and after a chat with a few of the lads decided that we'd had about as good a selection of views as we were going to get and decided to call it a day.

We briefly called into Llanrhidian on the way home but having already seen Hen Harrier earlier and with the feeling that nothing else that day would compare with such an impressive raptor headed for home.

What a day,yes it was a long wait but boy oh boy was it worth it,what a magnificent bird,I just hope it stays on a little longer as I for one would will certainly return over the Xmas holiday.

With Wayne unavailable and Dan concentrating on a couple of BTO Atlas tetrads around Cardiff myself and Kevin headed up to Beachley on the outskirts of Chepstow for the obliging Pomarine Skua which had been feeding well on a sheep carcass on the high water mark for the better part of a week.
An early start got us to Chepstow for the high tide at just after 10.00am and following the excellent directions on Birdguides we were soon trudging across the very wet and muddy path along the estuary.
If ever there was a time when you wished that your wellies weren't in the back of the garage this was it !!
We soon arrived at the small patch of reeds where the bird was feeding and it gave superb close views as it continued to feed on what was now a 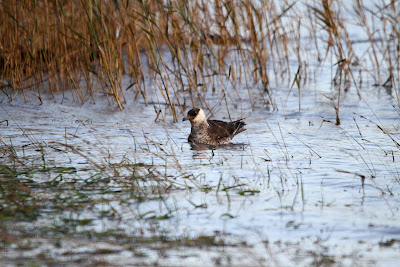 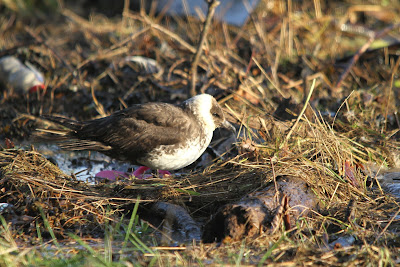 My only previous views like most birders' of Pom Skua have been distant views from seawatching places like Strumble Head or from boats,not even a "close-in" view at Strumble could compare with the views of this bir 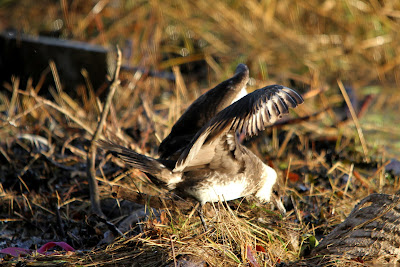 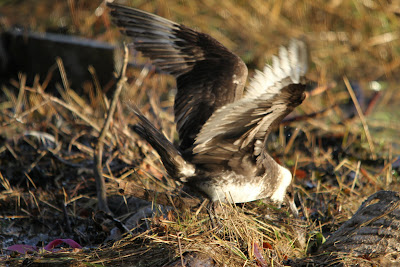 With the tide rising rapidly and the carcass becoming fully submerged the bird took to the wing,and whilst we beat a hasty retreat to avoid getting cut off it gave us some excellent flight views as it flew up and down the estua 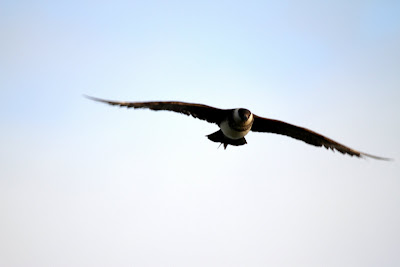 We next headed for the Forest of Dean to try and get Hawfinch for Kev's year list but despite a good search at both Speech House and Brierley we "dipped" miserably.

A call into Aust Wharf between the two Severn crossings on the way home was equally unproductive as the Short Eared Owls which have wintered at the site for many years don't appear to have turned up this year,and so with the weather starting to close in we headed back over the bridge to a soggy wet Wales.

A couple of phone calls Friday night to Dan and Kev confirmed that both were interested in going for the Yellow Browed Warbler at the local sewage works found earlier in the week by local birders Colin Gittins and Paul (Sid) Parsons,this is something like the 4th or 5th found in the valley by Colin and Sid in the 10 years that I've been birding and a tribute to "local patch" work put in.
This was my 3rd for the valley,4th for Glamorgan and 7th in total having seen other birds at Kenfig,Warham Wood in Norfolk,and 2 whilst down at Portland.
I met up with Dan and Geth at the Tylers Arms car park and following Colin's excellent directions we were soon at the location where Chris Thomas and Peter Morgan had already seen the bird which was doing a circuit with a tit flock.
We didn't have to wait too long before the tiny " 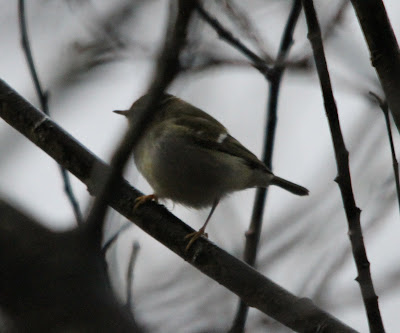 Siberian gem" was spotted again flitting in the willows just over the sewage works fence.

I'd dipped my toe in the water at the back end of October looking at digital SLRs and finally took the plunge in early November and joined the "long lens brigade".The new Canon 7D was too much of a temptation and so I hooked this up with a Sigma 150-500 zoom for birds and wildlife and the new Canon 18-135 zoom for general use (especially the grand-kids !!) 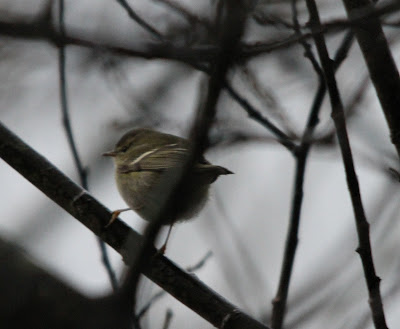 This was my first chance of trying to photograph a really mobile flitty leaf warbler and I can assure you it is definately not as easy as it looks.

A phonecall from Kev confirmed that he was on his way and following our directions he soon appeared with Gareth Jenkins for company who had also journeyed up the valley for the bird.

They were both soon on it,another "tick" for Kevin's impressive year list. 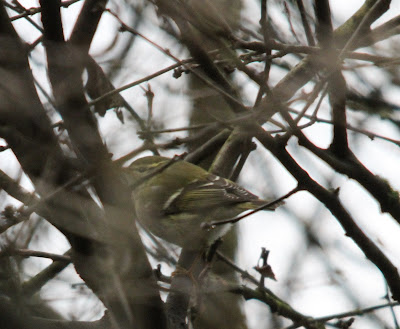 Trying to photograph the bird was a nightmare as the density of the branches and twigs of the trees played havoc with the auto-focus (even on "spot" focus) and it wasn't long before I switched to manual focus,I didn't get any "great" shots but given the crap light was quite pleased with a few reasonable record shots. 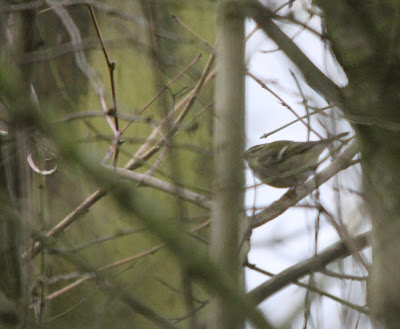 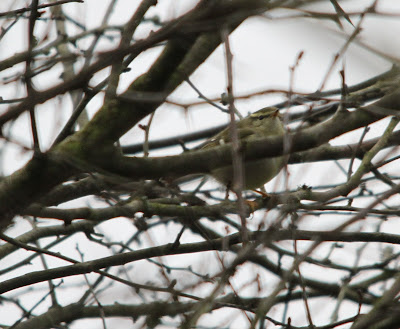 Dan and Geth had to dash off and Gareth and Kev also called it a day leaving myself ,Chris and Peter with our long lenses striving for "that one photo",Ididn't get it and I don't think Chris or Peter had a lot more luck.

Adrian Murch joined us and was soon on the bird and just after Peter left another two birders turned up.

Chris fancied calling into Parc Slip on his way home and so with time on my hands I joined him for a stroll around the reserve. 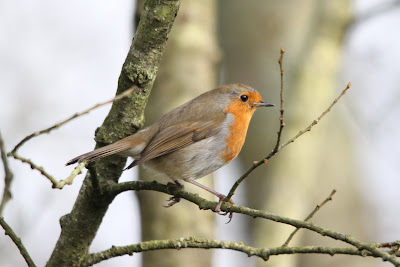 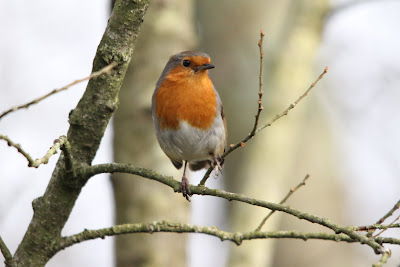 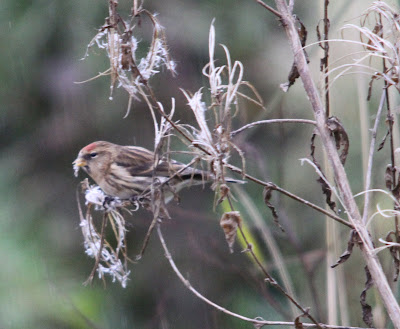 The weather started to close in and we got back to our cars just in time,mission accomplished-a really good bird "in the bag",another "lifer" for the Twitchmeister,a Glamorgan "tick" for Dan and I think a "lifer" for Peter,a good morning out and another chance to try out the new camera.