A tribute to "Lily" 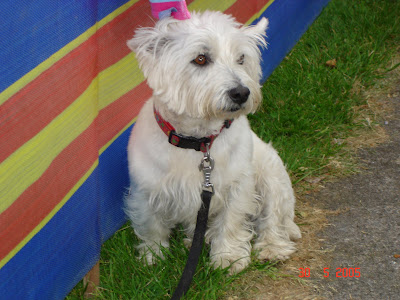 On 14th April 2008 myself and Teresa had to make the agonizing decision to have our little Westie "Lily" put to sleep.
She had been unwell for a couple of weeks and our vet confirmed that she had developed lung cancer which had spread to her abdomen.
The last good walk she accompanied me on was on Sun 6th April when we visited the Velindre Reservoirs just north-west of Swansea for the first time this year.
She accompanied me everywhre locally whether it was Darren Woods in Maesteg,Garnwen in Maesteg in summer for Nightjars,Mynydd Margam for GG Shrikes,Kenfig NNR,Ogmore-By-Sea,or a circuit of Eglwys Nunydd,she liked nothing better than to be out walking. 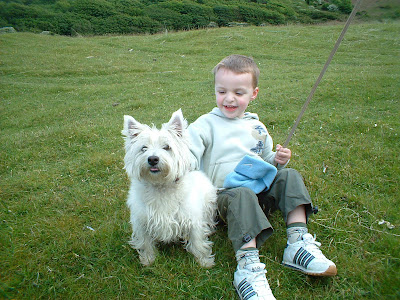 She was born on 30th November 1996 at Tumble,nr Llanelli which made her a "Scarlet" I guess and also a Welsh speaker,I vividly remember going to fetch her on a Saturday morning with my daughter Adele and grand-daughter Ashleigh who was only 18 months old at the time,we arrived early and had the pick of the litter of about 6-7 puppies. 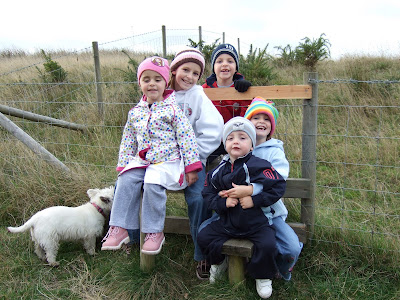 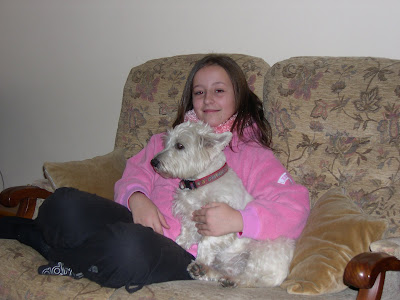 walks which if they all came resembled a school outing !!
She also loved to go away with us and accompanied myself and Teresa on our weekend trips in the caravan and also on a couple of winter trips during the Xmas holiday to Norfolk,on the last occasion being joined by grand-daughter Ashleigh when Lily also came on a boat trip out of Blakeney Quay to the point to see the seals.

She probably developed quite a good

"life list" without really knowing it which included Semi-Palmated Sandpiper at Ogmore-By-Sea,Spotted Sandpiper at Lisvane,Alpine Swift at Eglwys,Shore Lark at Whitford and Norfolk,Red Backed Shrike at Kenfig,Cattle Egret at Pennard,Richard's Pipit at Llanilid,Waxwings everywhere a few years ago,several GG Shrikes and Black Eared Kite amongst a variety of good birds in Norfolk. 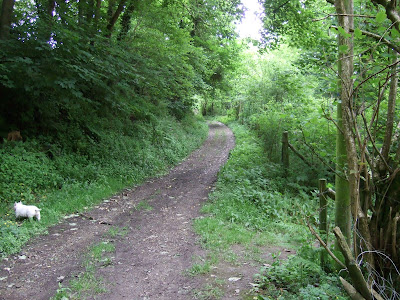 Her "life list" would probably be somewhere between 200-250,the envy of a number of birders !!

It's been really strange this last few weeks not being greeted by her on my return from work in the evenings and even stranger her not accompanying me on the recent twitches at Kenfig,she'd have especially loved the long walk out for the Short-Toed Lark.A number of Glamorgan birders have asked "where's the dog" ?

We really miss her and the house is so quiet without her around,we've decided that we will probably get another Westie but have agreed to leave it until the caravan season is complete and we have taken our main summer holiday,so look out lads when we go birdin' in the autumn we'll have another little friend joining us !!

Singing, too-ral-ay, oo-ral-ay addy,
We're going by plane and by car.
Capers, crossbills, eagles and divers,
Our year lists will be extended by far.

Oh! We're off up to the highlands of Scotland,
To the land of the loch and the glen.
And we'll all bring our wives back a present,
So we can go next time again.

Singing, too-ral-ay, oo-ral-ay addy,
We're going by plane and by car.
With the snow and the rain down pouring,
We'll all see the birds from the car.

Inspired by Wayne's cracking photograph of the Llwyn-on's wintering Water Pipit (see 'Weekend Ticks' below) I decided to don my oxygen mask on Tuesday and leave my lowland comfort zone and head for the hills.

I've never visited Llwyn-on before but it wasn't difficult at all to locate the slipway where the Wipit has spent the last few winters. But, when I arrived there was nothing there but a pair of Pied Wagtails and a Carrion Crow. I walked up and down the dam a couple of times looking for the blighter but only managed to find 4 Meadow Pipits and a bus full of French teenagers.

Back at the slipway there was no sign of the Wipit and so I decided to call it a day. I got in to the car and drove off to turn round. But, something told me to park at the slipway and try one more time. And guess what . . . ? 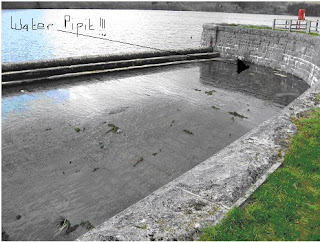 Can you see it?!
I ran back to the car and got the 'scope out and I managed this slightly better shot. 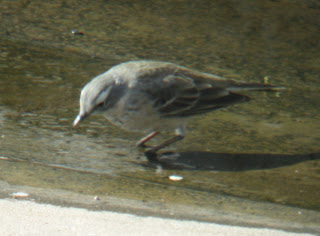 A cracking little bird which allowed me to watch it for a good quarter of an hour. The best views of a Water Pipit I've ever had. Thanks Wayne for the inspiration!!

Earlier in the day I'd visited Ogmore-by-Sea where there were 8 Purple Sandpipers, 2 Turnstones, a Grey Plover and 3 cracking Wheatears. At the estuary there were 11 White Wagtails and some distant Rock Pipits which may or may not have been littoralis - I didn't look that hard!! Disappointingly there was little else there.

Next stop Miskin in search of Willow Tit. I dipped but I did manage to find a Dipper and 4 Grey Wagtails on the River Ely.

And then today (Wednesday) found me down in Cardiff Bay for a flying visit before I had to do a bit of work. Finally, at my third attempt, I managed to get onto the adult winter Little Gull. There were shedloads of Sand Martin and even more B-h Gulls there too. Roll on some decent weather.

A couple of brief opportunities to tick some Glamorgan long-stayers were taken this weekend.

First on Saturday was Parc Tredelerch, where not a gull was to be seen so I quickly moved on for the Lisvane spotted sandpiper. Close-in views down to just a few yards revealed a few spots to the rear end of the bird but its nowhere near full summer plumage yet. Spring was in evidence with sand martins, chiffchaffs and blackcaps along with a comma and small tortoiseshell on the wing.

Today, I took a quick jaunt to Llwyn-onn Reservoir for the umpteenth time over the last few years and finally caught up with the target bird. This one is nearing full-summer plumage but lacked any pink tones, at least to my eyes in the given light conditions. 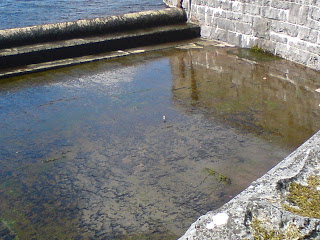 On Sunday 30.March myself,Wayne and Dan decided to twitch the Rose Coloured Starling that had been hanging around gardens in Haverfordwest for a few weeks and the female american Black Duck that had arrived at Marloes Mere a week or so ago and which was only the 3rd record for Wales.
We arranged to meet at our usual spot at Sainsbury's car park at Junc 36 of the M4 at 08.30am and set off promptly with myself sharing Wayne's car and Dan with kids Gethin and Gwennie in his.
My trusty sat nav got us to the exact location posted on Birdguides for the Rosy Starling and after about 20 mins it finally showed if only briefly at first,we hung about for a further 30 mins or so and the bird showed on and off and eventually gave us great views when it perched on top of a tall post on the boudary of one of the gardens.
The bird was a first winter and although it didn't have the rosy pink colour of an adult it was very distintive and a welcome addition to my U.K list.
Another lifer for the young Twitchmeister and also a lifer for your's truly having dipped on the species in Port Talbot about 2001,Somerset about 2005 and the Kidwelly bird last year,another "bogey" bird off the dreaded list !! 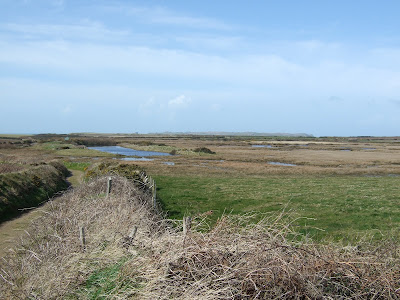 Satisfied with our first conquest we headed off for Marloes Mere in search of the Black Duck and within 15 mins pulled into the National Trust car park,a brief chat with the attendant and we were soon walking down the track towards the hide overlooking the main p 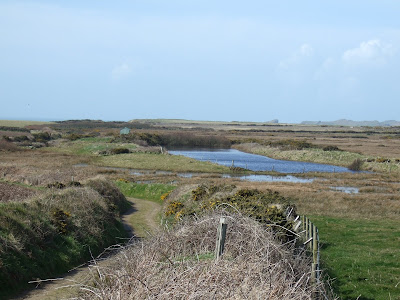 ool.
As we walked down the track and scanned the mere for anything else that was about Wayne called a ringtail Hen Harrier which we all got on to quickly and it proceeded to give us some great views whilst hunting.
We soon arrived at the empty hide and a quick scan of the main pool showed plenty of Teal,Mallard and a few Shoveler but no sign of a female Black Duck.
We continued to scan and I called a good view of a Water Rail on an adjacent small pool,still no Black Duck though. 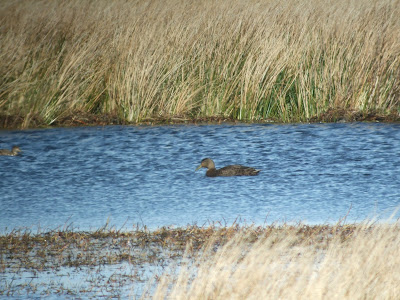 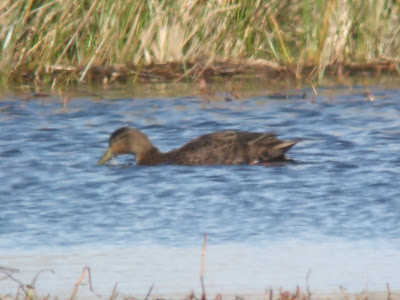 We waited patiently and all thought we were in for a pretty long wait,a sleeping female Mallard tucked in to the reeds had us all guessing when from behind it emerged the duck we had all been waiting for,success !!!
Although initially dabbling when all we got was an up ended rear view it proceeded to swim into open water with it's male Mallard "boyfriend" and gave excellent if somewhat distant views.
We continued to watch and it's really dark colour and greeny coloured bill set it apart from the female Mallards,it performed well and I managed to digi-scope a few record photos. 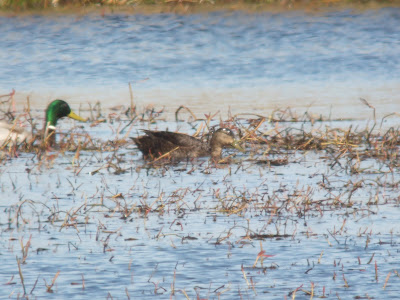 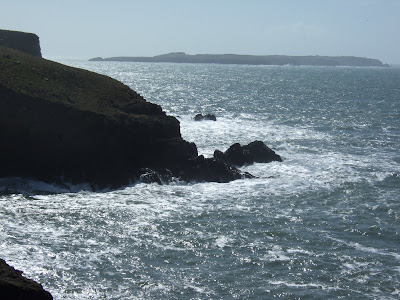 Well pleased with our second success of the day,a lifer for all of us we agreed to eat our lunch down on Wooltack Point overlooking Skomer Island and maybe pick up a few year ticks in the process.Gannet,Kittiwake,Rock Pipit and Shag as well as some newly arrived Wheatears were all spotted as we tucked into our s 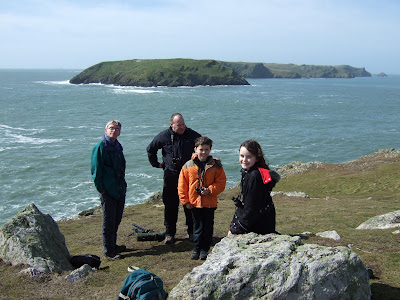 andwiches and the walk back to the car saw us tick 3 Choughs and a Kestrel for the trip list.
A Ring Billed Gull had been seen for a few days on the Gann Estuary at Dale and this was to be our next target for the day and a year tick for myself and Wayne with neither of us inclined to go for the Lamby Lake bird in Cardiff.
We walked across the beach to the gull roost at the mouth of the estuary picking up Oystercatcher,Curlew and a couple of Grey Plovers on the way.
Unfortunately 3 really stupid women had the same idea when "walking" their dog and within minutes the uncontrolled collie had scattered the gulls in all directions,don't you just love it when that happens,inconsiderate ar.......es !!
Suffice to say the RBG eluded us,never mind there's always the Cardiff bird if it hangs around.
We decided to call it a day all well pleased with our efforts,2 lifers for myself and the young Twitchmeister and a lifer for Dan and Wayne,a smashing day out in good company in a beautiful part of Wales with a wonderfully sunny day as a bonus.
If old rocker Meatloaf was a twitcher he could have burst into "Two Out Of Three Aint Bad" !!!
Posted by Jeff at 4/01/2008 08:25:00 pm No comments: