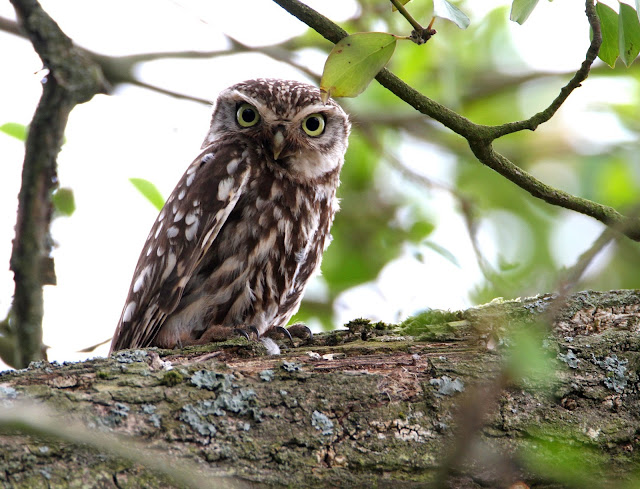 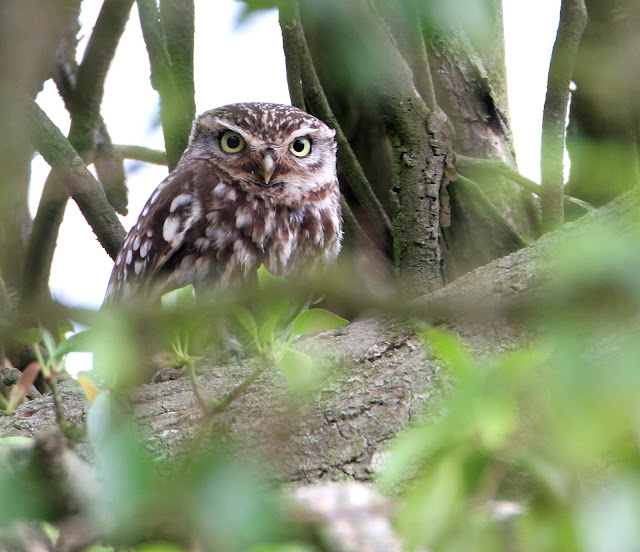 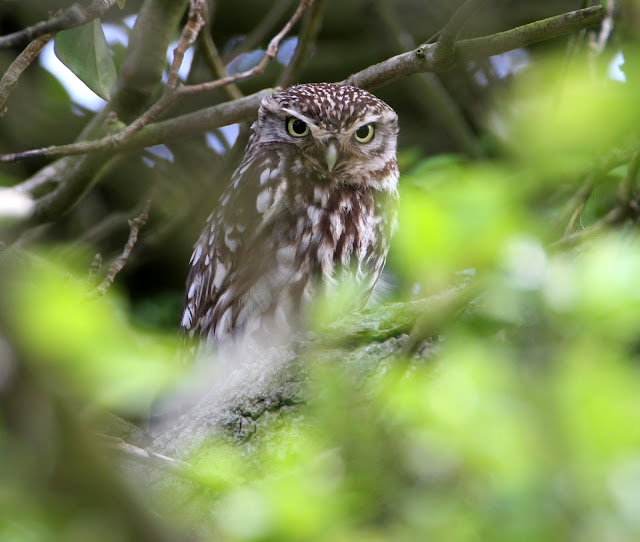 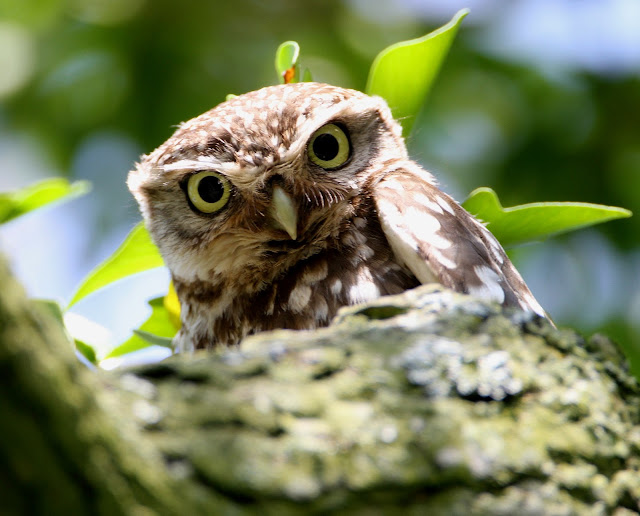 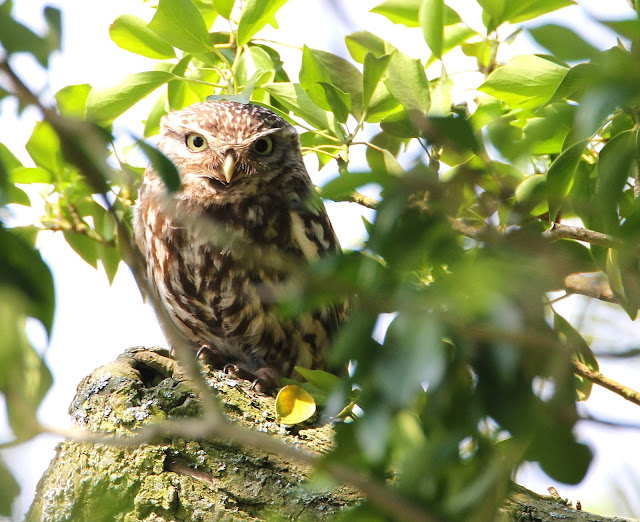 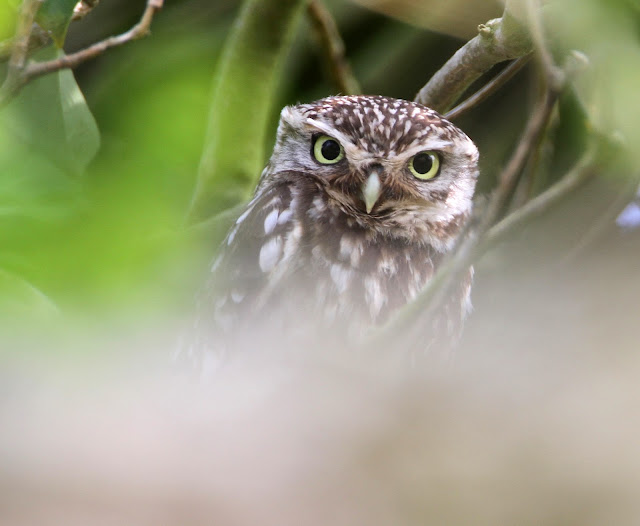 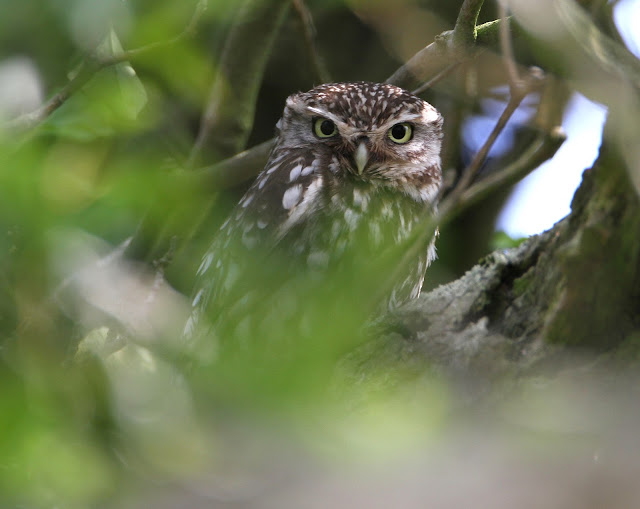 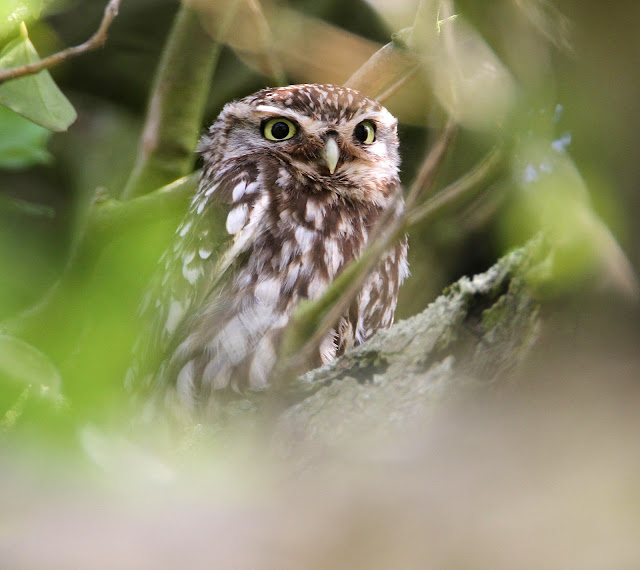 Enjoyed  a few hours out early a.m on Saturday with local birder and fellow "togger" Steve Wilce who has become a good friend and we checked out a pair of tree dwelling Little Owls near Talgarth just a few miles and 15 minutes drive north of Llangors.
There were two birds present each using two trees only about 40m apart which form their territory.
One of the birds showed itself whilst the other called from the adjacent tree.
We spent about 2 1/2 hours trying to get a clear shot of the one bird on show in the dense ivy clad tree but he/she was content to watch us both from it's lofty perch without fully revealing itself.
Certainly the most difficult Little Owl that I've attempted to photograph the others having been derelict building dwellers.
Having spent a fruitless couple of hours at Talybont Reservoir and Llangasty Point on Sunday morning I pooped back to the caravan for a cuppa and then returned early p.m for another go at the Little Owls.
I eventually found one peering at me through the ivy and it showed a little more of itself for an hour or so and I managed to get a few more shots even though the light by then had got a little bit harsh.
If you look carefully you will see that I managed to photograph different birds on each day,the bill markings differ and also some of the head feather patterns.
I'll leave another visit until a little later in the year when the leaves have started to fall and hopefully I may have a better chance of getting one out in the open.
Posted by Jeff at 7/22/2013 09:39:00 pm No comments: 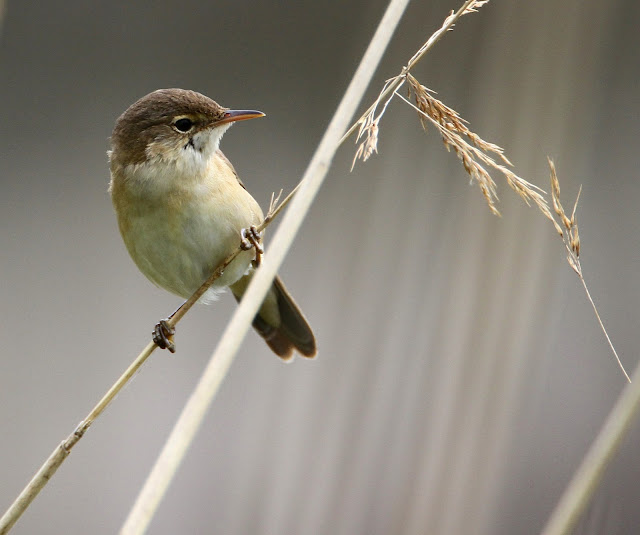 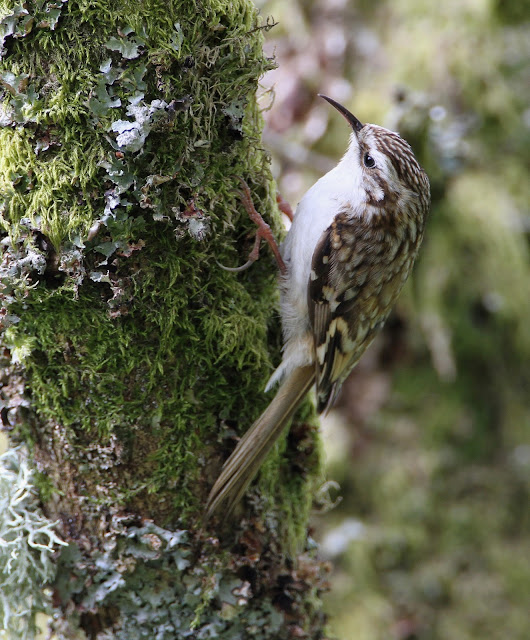 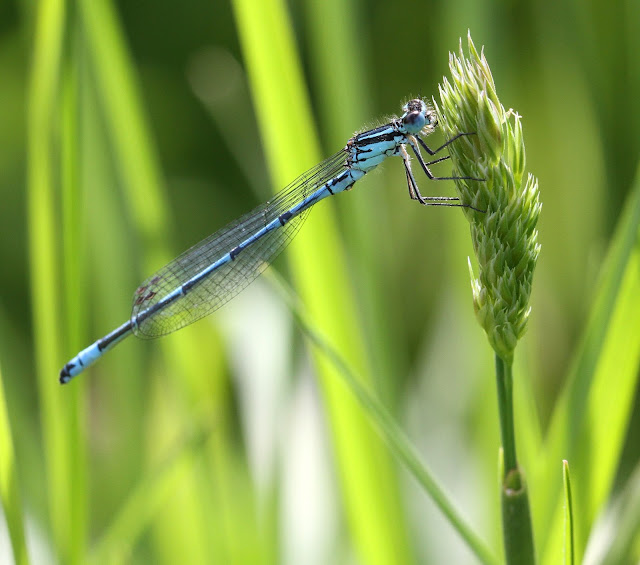 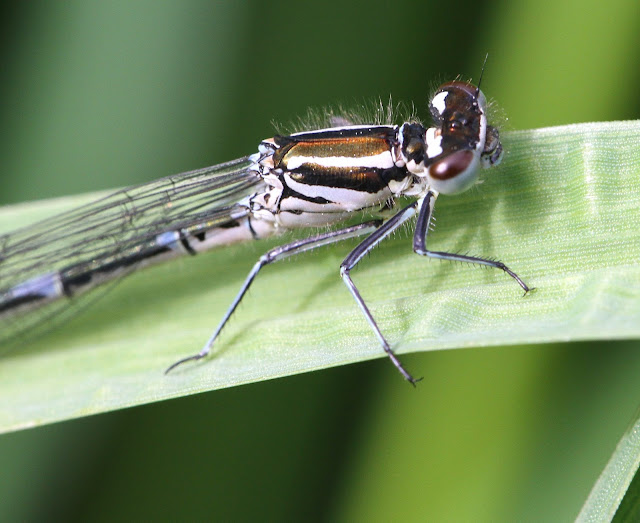 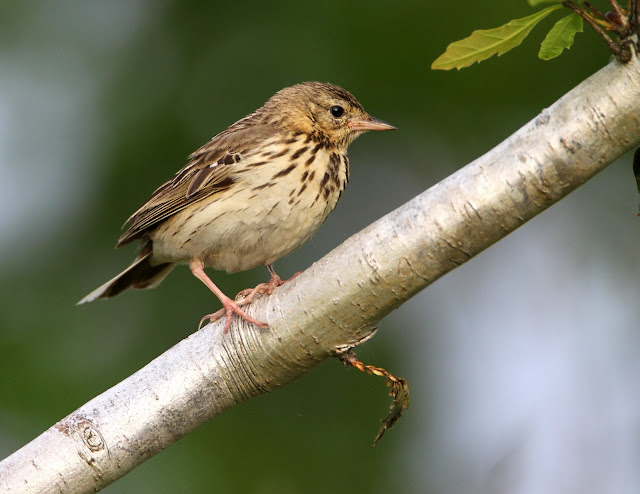 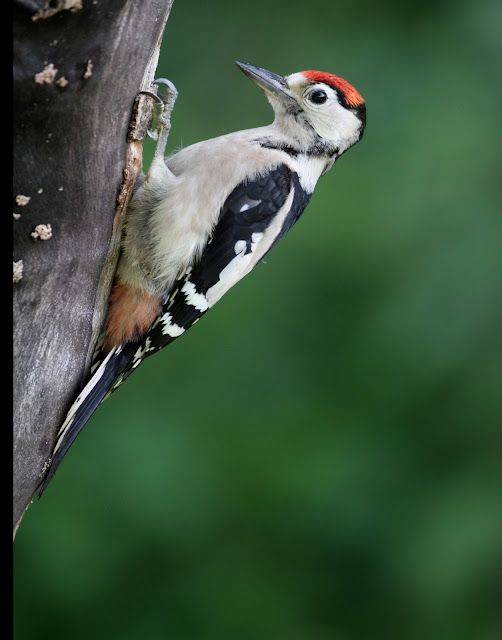 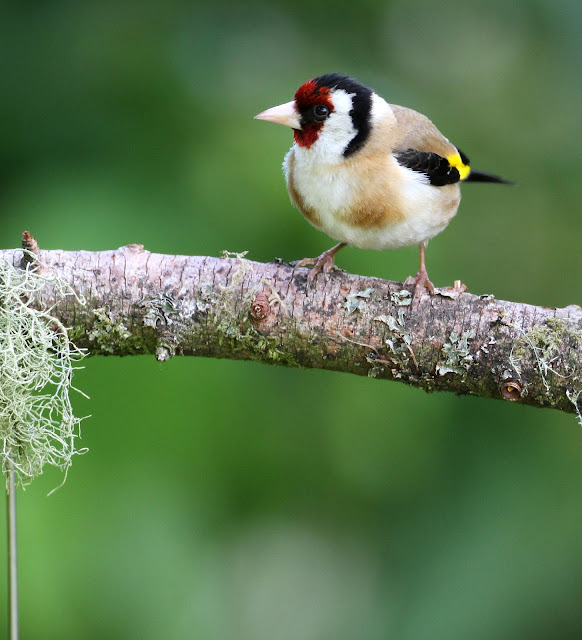 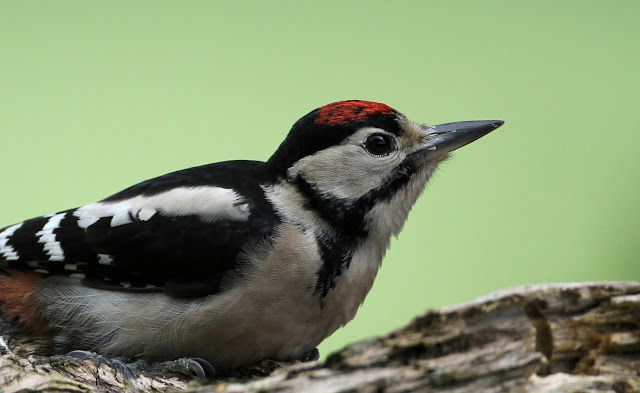 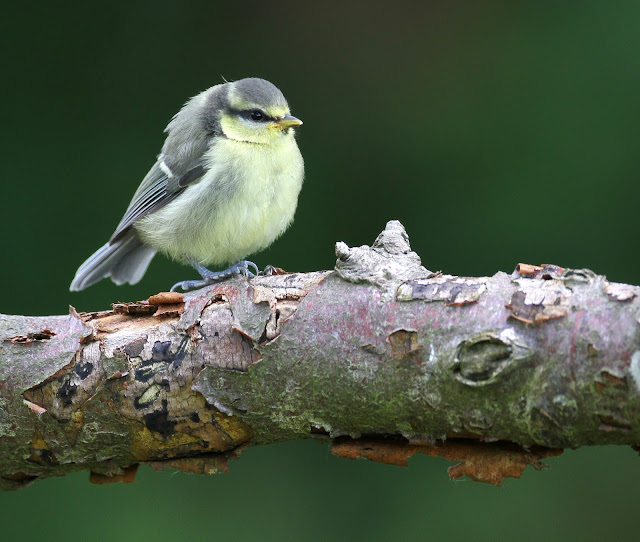 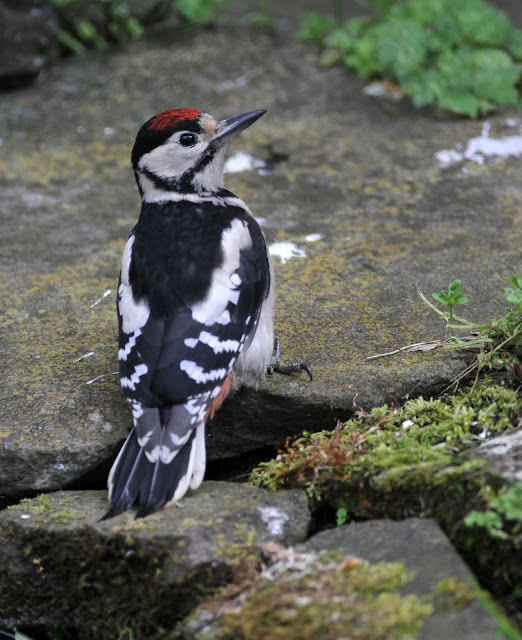 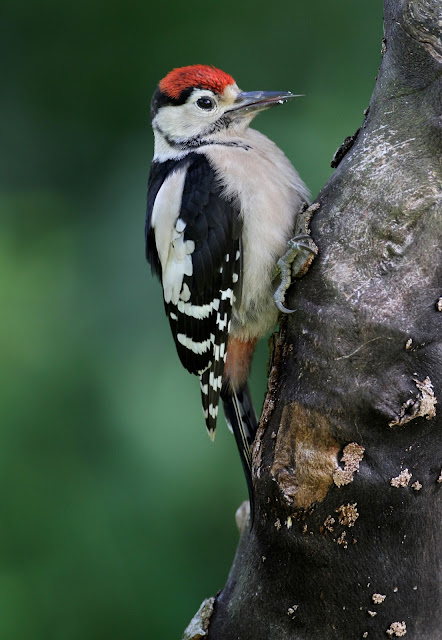 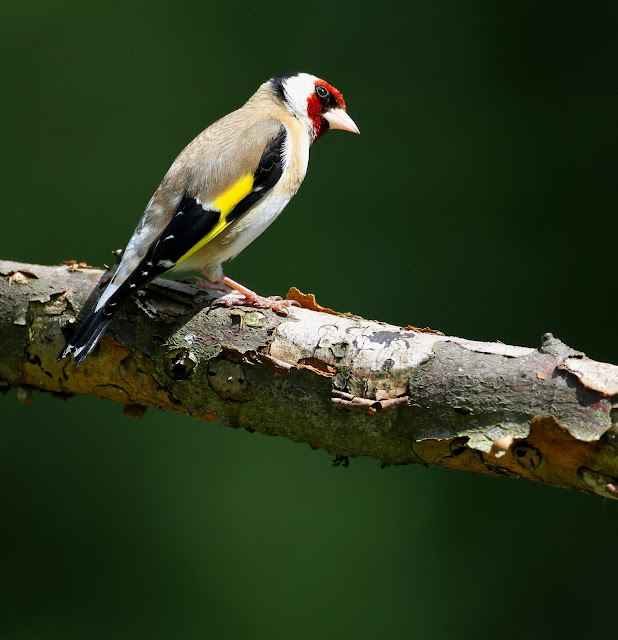 Few images from the last month including a first dabble with macro using a new lens that Teresa bought me for my last birthday.
Posted by Jeff at 7/01/2013 09:19:00 pm No comments: