My weekend started on Friday evening when straight after work I popped down to the Ogmore Estuary in an attempt to catch up with and photograph the Wood Sandpiper found earlier in the day by Paul Roberts.
I was greeted on arrival by fellow "Maestegi" Simon Murray who informed me that the bird was still on the west bank of the river opposite Portobello House, it was in the company of three stunning Black-tailed Godwits still sporting summer plumage and although a little distant I managed a few reasonable "record" shots....... 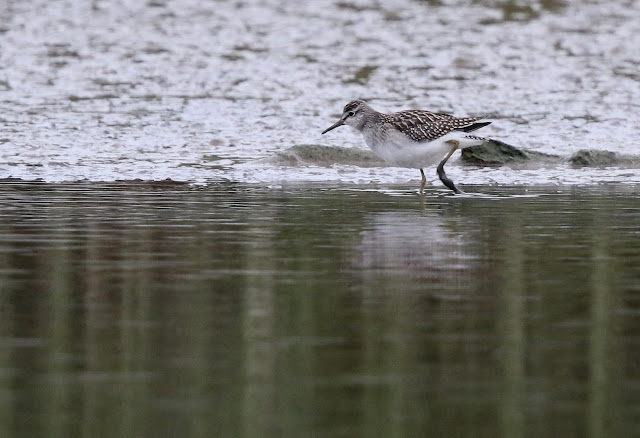 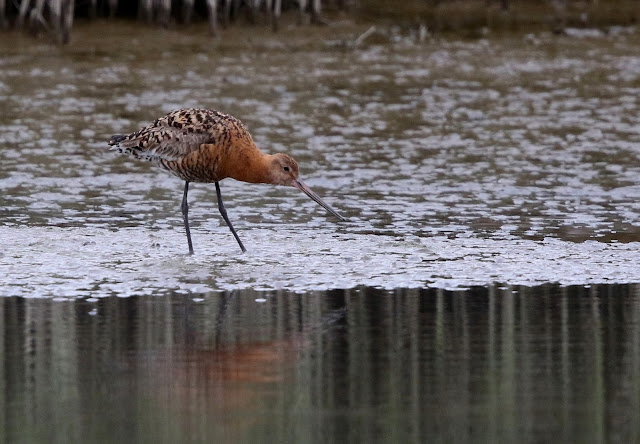 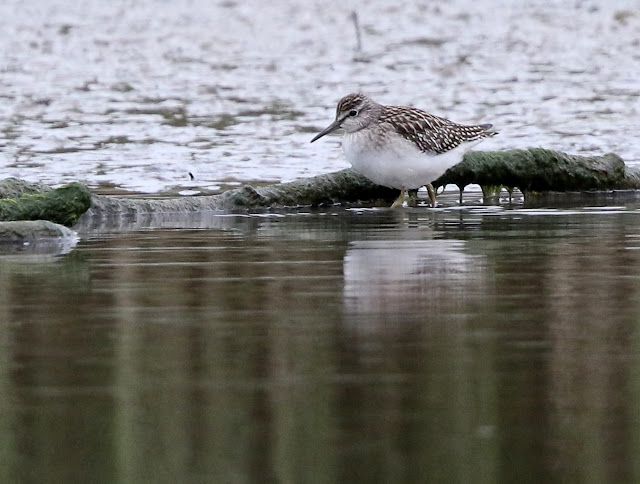 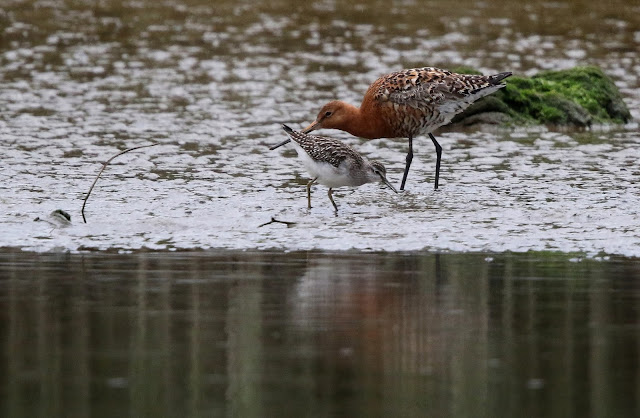 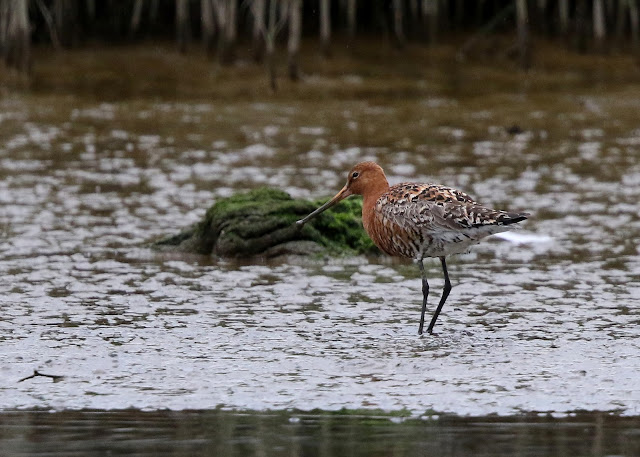 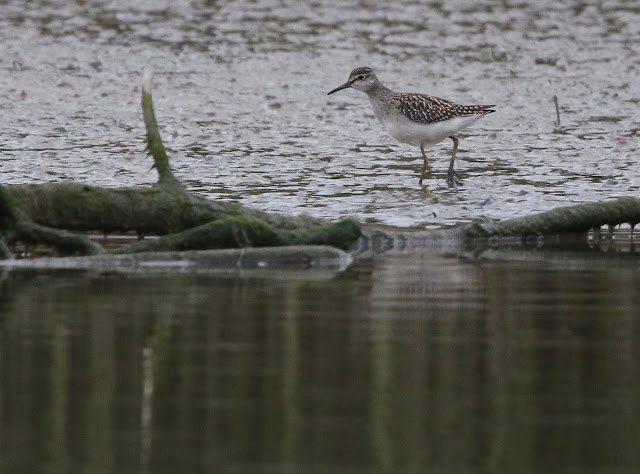 I returned to Ogmore on Saturday morning bumping into Matt Hunter and Jeff Lack hoping that the bird was still there and maybe crossing over to the east bank of the river but unfortunately it seemed to remain faithful to the far bank so I decided to move on to Kenfig NNR resisting the temptation to pop to Goldcliff for the Temminck's Stint found early on the morning.
The Great White Egret was perched up in it's regular tree on the west side of the pool but after I had been in the south pool hide for about 45 mins it flew down to the open area just to the right of the hide.
It didn't stay in the open for very long and strolled into the reeds only showing occasionally........ 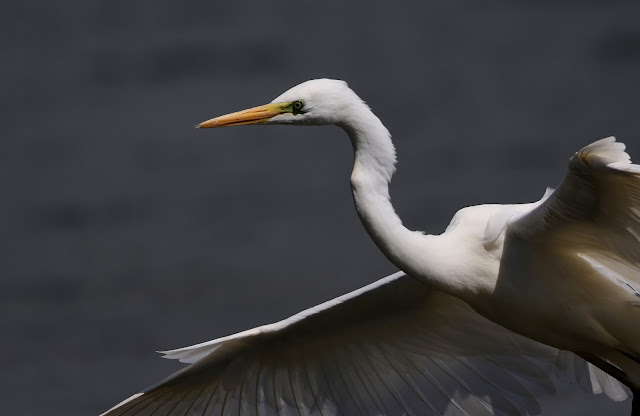 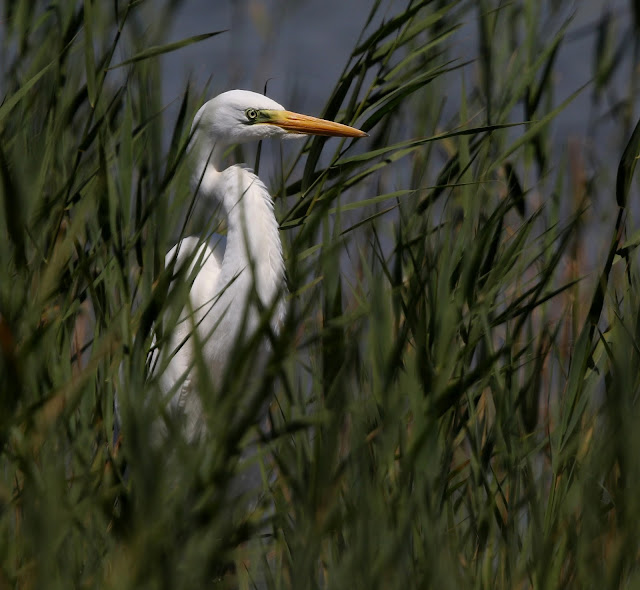 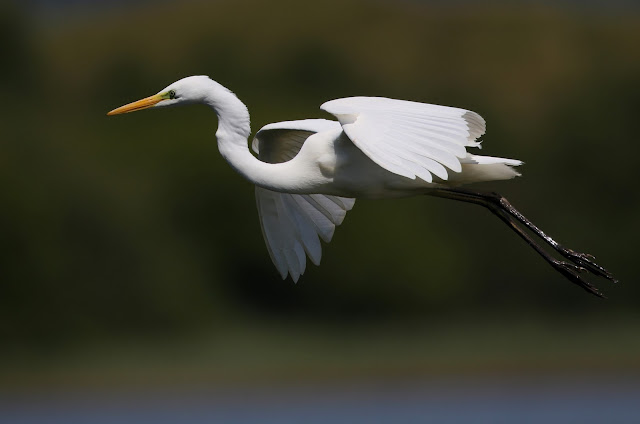 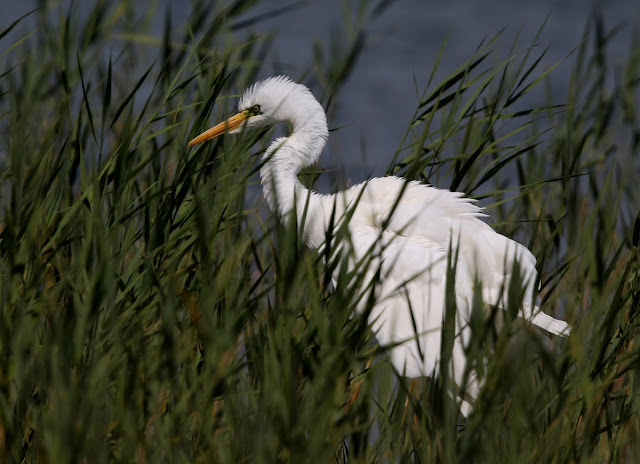 I'd enjoyed a nice couple of hours at Kenfig also seeing a Hobby briefly over the pool and a female/juvenile type Marsh Harrier distantly hunting over the dunes to the north-east of the pool and the GWE flying back to it's regular perch was my cue to move on.
There was still plenty of time to go to Goldcliff and I managed to drag fellow "togger" Richard Smith away from watching the Tour de France, after meeting up at Junc 34 we soon arrived at Goldcliff where the Temminck's Stint was showing well but distantly from the first hide.
We moved back and fore between the first hide and the next viewing platform but still couldn't get the bird as near as we had hoped for, never the less it was a "Welsh" tick for both of us and I managed a couple of photos albeit very much of the "record" type...... 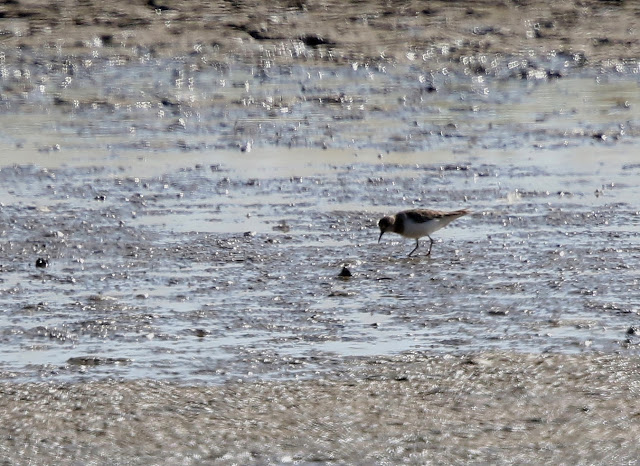 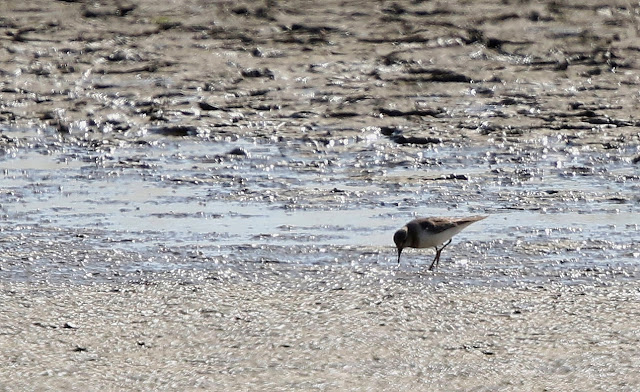 There were several other nice waders on the pools including a Curlew Sandpiper, a couple of Spotted Redshanks, Common Redshank, Greenshank, Little Ringed and Ringed Plovers as well as good numbers of Dunlin and Lapwing.
It was also great to bump into fellow "Boxers" Dan and Geth as we walked back to the car, glad you still can't resist the temptation of a rarity lads !!
We decided to finish off the day with Richard showing me Magor Marsh where I had not been before for my first attempt at photographing the resident Water Voles.
We parked up in the small car park and viewed the reen from the small bridge and didn't have to wait too long for a couple to feed on an apple on one of the floating feeding platforms, I managed a few shots and will definitely return and spend some time there in the hope of getting some more natural looking photographs. 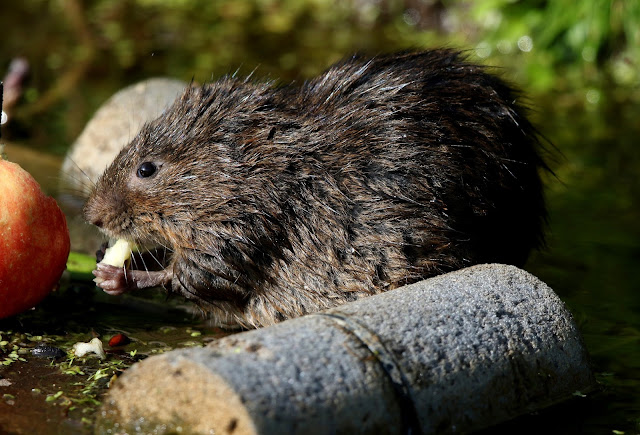 Yesterday was my third visit to Kenfig Pool in an attempt to get some quality photos of the Great White Egret that turned up at the pool on Friday 3rd July.
I'd made two previous visits the first a week ago on Sunday 5th July and the second after work on Thursday 9th July but only managed some flight shots a few of which I was pleased with but most being too distant, frustratingly the bird just wouldn't land near the south pool hide on both occasions.
An early start yesterday saw me arrive at the hide at 6.30am to be greeted by Steve Hinton and Alan Hughes, Steve had already been there an hour and Alan had arrived just before I did.
The bird was outside the hide when I arrived, I had seen it descend as I walked down, but it only stayed briefly allowing me a few shots before it flew off into the trees on the west side.
We waited a few hours before the bird eventually flew over to us and landed, it spent some time in front of the hide but was always obscured by the reeds before flying off again.
Steve Howcroft had arrived as well in the meantime and managed a couple of nice "digi-scoped" images.
Alan had left by now and at about 12.30pm Steve decided to call it a day and I walked up to the car with him looking back to see the bird perched up in the west shore trees.
Having seen some of the shots obtained by my fellow "toggers" and friends Rob Mitchell and Richard Smith (it's bloody competitive this bird photography) I was determined to "nail" the bird.
So after a few sandwiches and a listen to the Cardiff test match in the car I made a return to the hide, yet again the bird was out in front but skulking in the reeds.
A little while later Cliff Woodhead and Colin Harvey arrived and after about 45 minutes the bird returned again and this time gave amazing views and a photographic opportunity you can only dream of as it paraded around in the open as close as 30' from the hide doing everything a Great White Egret would do !!
I finally got the opportunity I had wanted and I think I eventually "nailed it"............. 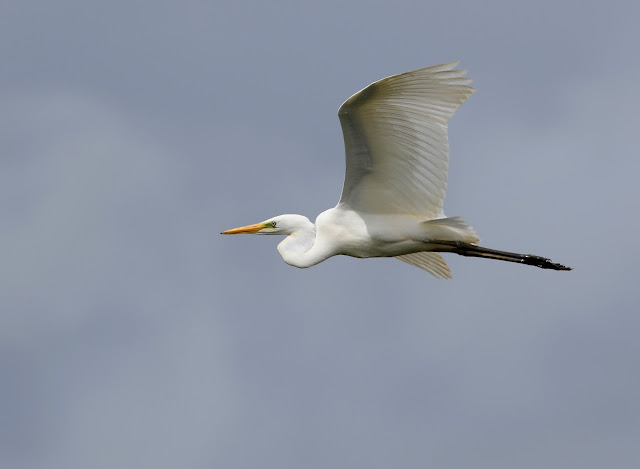 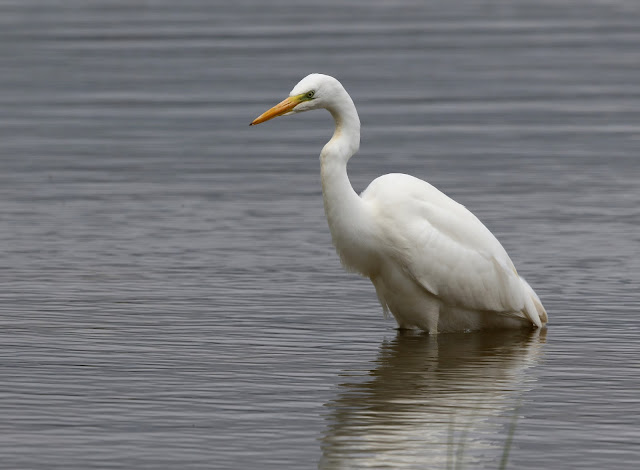 The bird fished continually and seemed very adept at being able to take two fish at a time on occasions..... 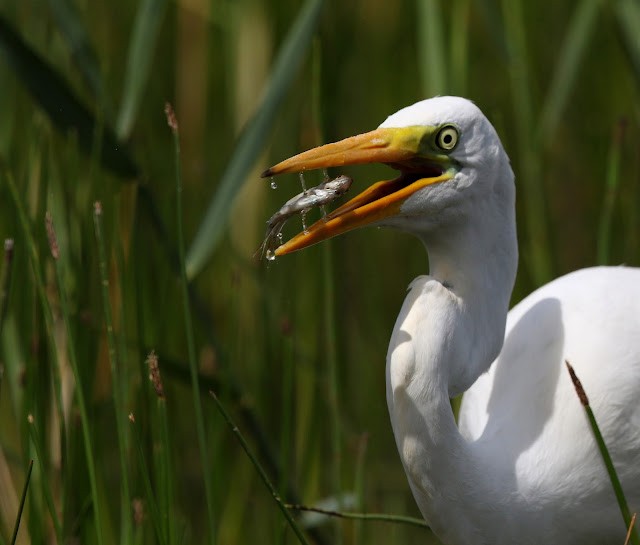 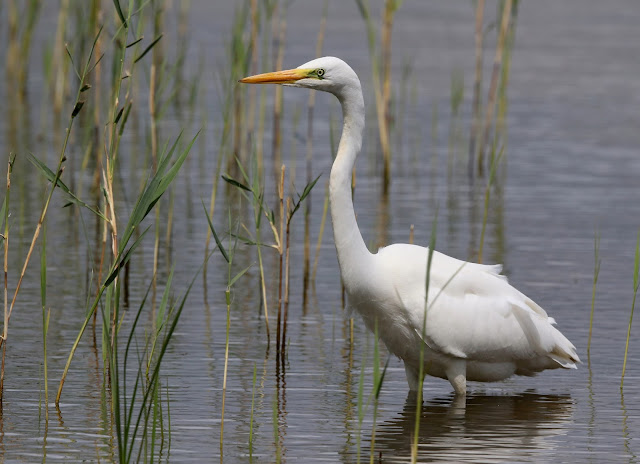 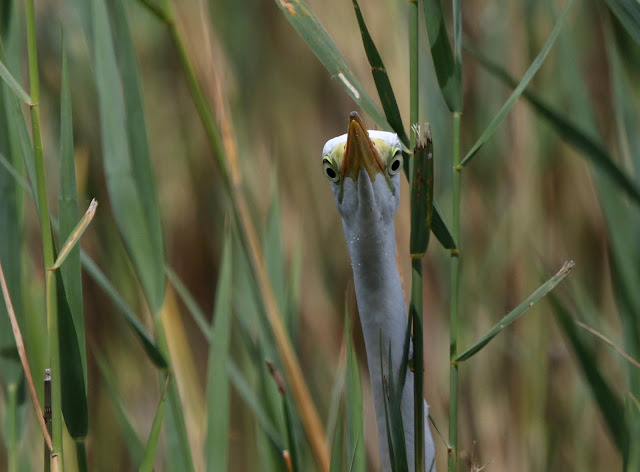 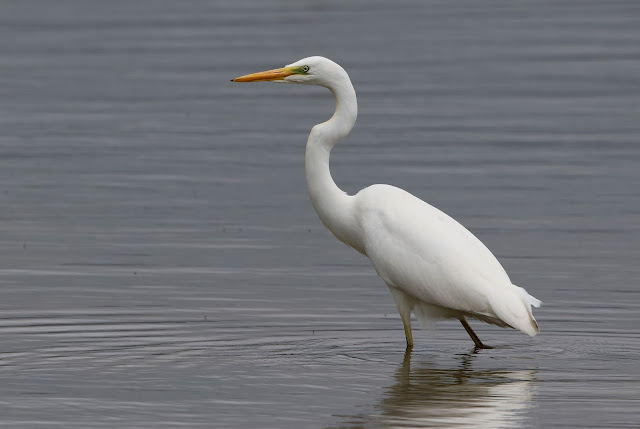 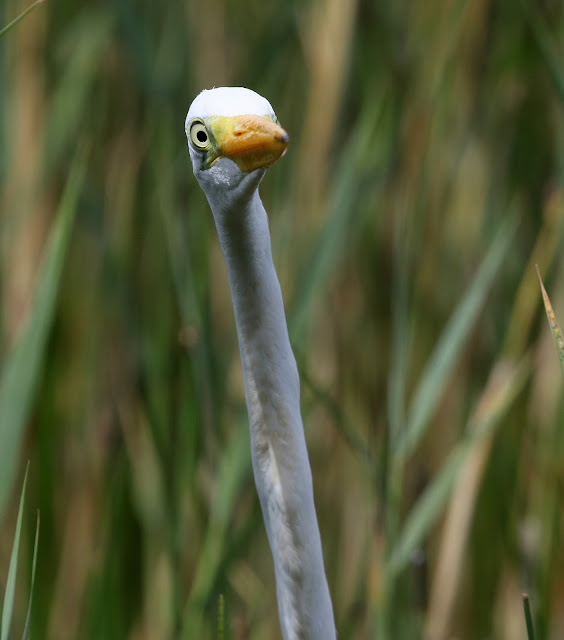 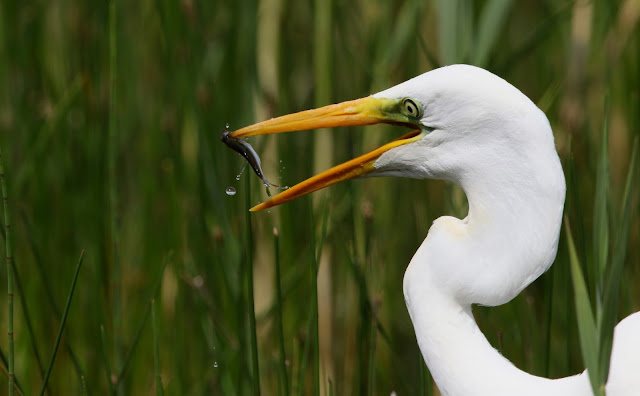 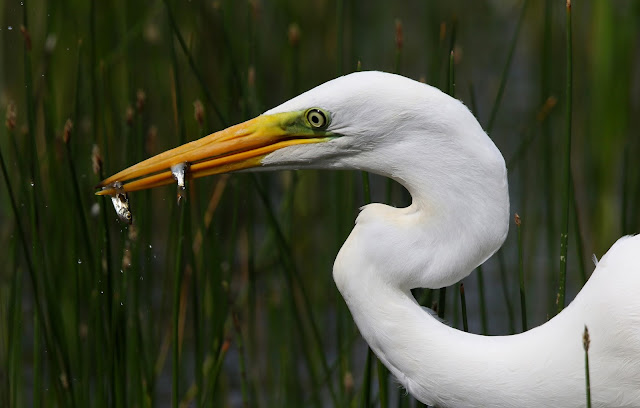 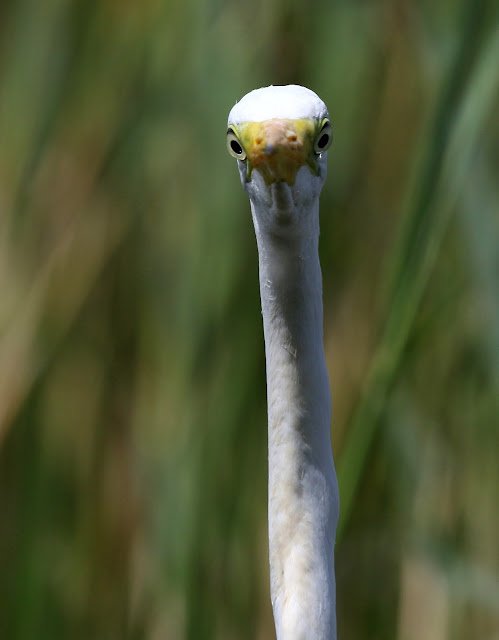 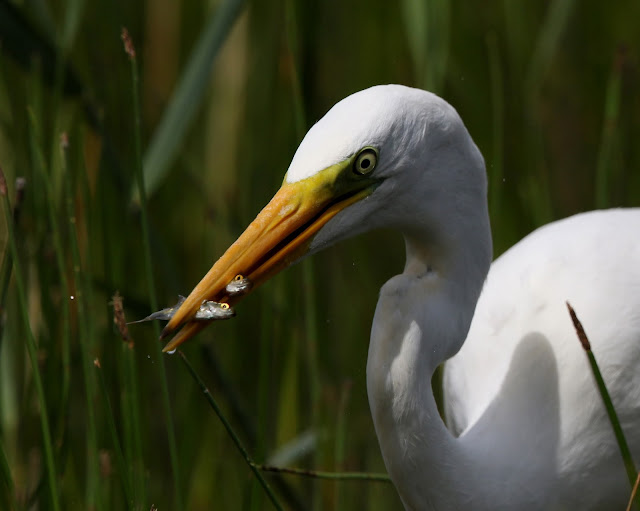 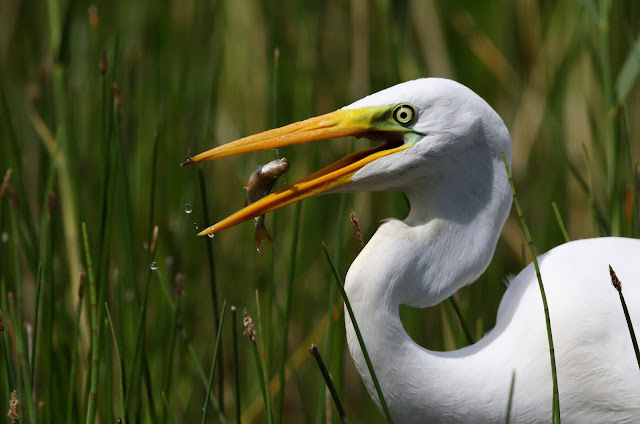