Having said I'd get up "first thing" in my previous posting I suppose I'd better prove that I did!

Well I did, and I'm really glad I did. It wasn't quite as busy as the previous morning, and we didn't have the excitement of adding any new species to the patch life list, but it was worth getting up to see the numbers of Chiffchaff going through Radyr Floodplain (The Scrub). We counted at least 35 of them, and that was a conservative estimate. Also making up the numbers were a dozen Blackcap and 4 Whitethroats. And then Geth turned up trumps by digging out a Lesser Whitethroat - only our second ever for The Scrub. Of interest to Geth and me only were some fly-over Rooks (a patch year tick).

And finally, on our way home we went through 'The Top Scrub' (not that it is in anyway 'top' in a birding sense - it's normally rubbish. It's not even particularly 'scrubby' either). It's official name is the Glamorgan Canal LNR Top Meadow and to our surprise, in addition to the ever present Magpies, Jackdaws, Greenfinch and dog walkers, it also had 3 Tree Pipits.

Ah, the joys of migration.

A 'Fall' on the Patch

In terms of notable UK 'falls' of birds this one would probably be better described as a very small 'stumble'. It wouldn't register more than 0.001 on the Ornithological Richter Scale, but in terms of Gethin's and my patch (Radyr Floodplain/Forest Farm/Glamorgan Canal nr Whitchurch, Cardiff) today was positively historic . . . and I nearly missed out on it by being a lazy bugger.

Geth had clocked that it was going to be cloudy and wet overnight and clearing in the morning. He recognised the birding potential of such weather and was out first thing. I on the other hand chose to stay in bed . . . . again. (See previous posting).

An hour later, I was just stepping into the shower when there was an almighty noise downstairs created by Gethin appearing to try and smash the front door down (he'd forgotten his key again). "WHINCHAT! TREE PIPIT! REDSTARTS! LOADS OF WARBLERS!" he blurted breathlessly. The shower was fogotten and, having remembered to throw on some clothes, we were on our way.

As soon as we entered 'The Scrub' (aka Radyr Flood Plain) I got onto a male Redstart and Geth got onto a fem/imm. We didn't bother looking at them for any length of time - we've seen quite a few there on migration - because up on top of a small hawthorn was a Whinchat, and then there was another, and then another! 3 flippin' Whinchat! High fives . . . a new patch tick.

In no time at all, a pipit flew overhead and onto the top of a bush. Meadow Pipit. Damn! A scarcity on the patch, we'd have been happy enough to see a Mipit normally - but not today. We traipsed round The Scrub picking up the odd Chiffchaff, Blackcap and Whitethroat but the numbers of warblers Geth had had an hour earlier had already cleared out.

And then there it was, another pipit. Straight ahead of us. And this time it was a Tree Pipit - yet another new patch tick. Top banana!

The Tree Pipit takes our combined patch list up to 89. Geth is on 88 (he's seen Canada Goose, Lapwing, Sedge Warbler, Pied Flycatcher and Stonechat and I haven't) and I'm on 84 (I've seen Lesser Spotted Woodpecker and he hasn't).

Why am I four species behind him? Because I'm a lazy bugger and he's seen all those extra species while I've been lying in bed.

I'll be out with him first thing tomorrow morning though.

It's August and so the Jenkins-Joneses must be down on their annual summer holidays in beautiful Pembrokeshire. (Every year, I'd like to go to Norfolk on our holidays, but the current Mrs Jenkins-Jones prefers Pembrokeshire. And so every year we compromise - the secret of a successful marriage - and we end up in Pembrokeshire).

Now, if you're a birder, early August isn't usually the bestest time to visit Pembrokeshire. (Norfolk is much better in August, Mrs JJ take note). The islands are quiet because most of the seabirds have finished nesting, wader passage hasn't really kicked off and it's usually just a little bit too soon to expect some nice rarities. The height of our birding ambition every year is to get the Fishguard Harbour Black Guillemots onto Gethin's life list. And so it was again this year. But of course, they also naff off in early August too so we've dipped on them every year.

We set off for St Davids on the 9th. Unbeknown to the Twitchmeister, before leaving the house I'd clocked that there was a Melodious Warbler lurking down at Martin's Haven. Like any self-respecting birding father, I didn't tell him. On arriving at Havefordwest, I pulled over and checked my phone - the harmonious Hippo was still showing - I still didn't breathe a word. Two minutes before we arrived at the National Trust car park in Martin's Haven I told him to get hold of his Collins and familiarise himself with Melodious Warbler. "Why?" he said "Cos you're going to be looking at one within the next few minutes" I said. Cue: pandamonium.

We duly arrived at the spot where the bird had been seen. Cue usual opening question, trying to sound as calm as possible - "Is it showing boys?" Reply: "Nope". Trying to hide my disappointment "Oh that's a shame". I wandered off to inform Mrs JJ that we may be some time when up went the shout "There it is!" By the time I got there it had disappeared again. Geth had seen it (briefly) and I hadn't. Cue: a serious bout of gripping off his father. It's a good thing for the lad that two minutes later the bird showed brilliantly otherwise he'd have had a tripod wrapped round his neck. Lifer for both of us. 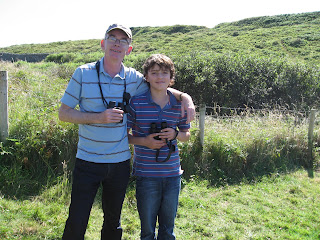 The self-congratulatory couple at Martin's Haven.

This holiday was already proving better than any of our other Pembrokeshire family holidays . . . and it hadn't even started yet.

We arrived at St Davids in a cold, stiff south westerly wind. Mrs JJ wasn't happy. But, Geth and I were. Strumble Head here we come!

7.30 the following morning (I know, I know, we should have been there at least an hour earlier but it was the first full day of our holiday and Mrs JJ didn't want to be woken up too early . . . so we compromised) we were sitting on our deckchairs on Strumble. Cue usual opening question: "Anything showing, boys?" Reply: "Nope, very quiet". Trying to hide my disappointment "Oh, what a shame".

Now, anybody who's ever been seawatching in Glamorgan will be familiar with 'quiet days', and a 'quiet seawatching day' in Glamorgan isn't the same as a 'quiet seawatching day' on Strumble. There were thousands of birds out there! Dozens of Kittiwakes streamed past, as did scores of Manx Shearwaters, auks, gulls and Gannets galore. And then best of all three Bonxies close in and two Sooty Shearwaters further out. Two more lifers for the Twitchmeister (#248 & #249) and a Wales tick for me (the Sooties). 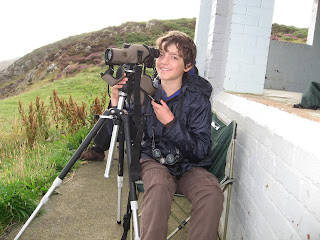 "Wot no Balearics?" The Twitchmeister enjoying a "quiet day" on Strumble.

We left north Pembs the following Saturday (having enjoyed every night the spectacle of thousands Manxies flying past St Davids Head on the way back to their burrows) and headed off to our second destination - Saundersfoot. Here, the quality of birding dropped to the usual Jenkins-Jones family holiday standard. Although Geth, on one of his early morning forays into a nearby wood (I'd stayed in bed), found a Marsh Tit. He tried gripping me off again but it didn't work this time. 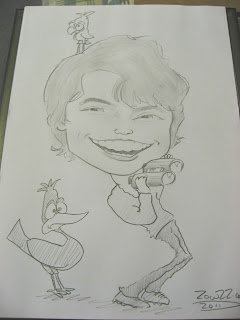 The Twitchmeister sketched in Tenby - complete with bins
The twpsyn has since cut his hair so the picture doesn't look anything like him anymore.
In birding terms the holiday may have started with a bang and ended in a whimper but I'm not complaining. I'll be happy to compromise and return to Pembrokeshire again in 2012.

And in case you'r wondering . . . yes, we dipped on the Black Guillemots at Fishguard again.