"First weekend up at the caravan" 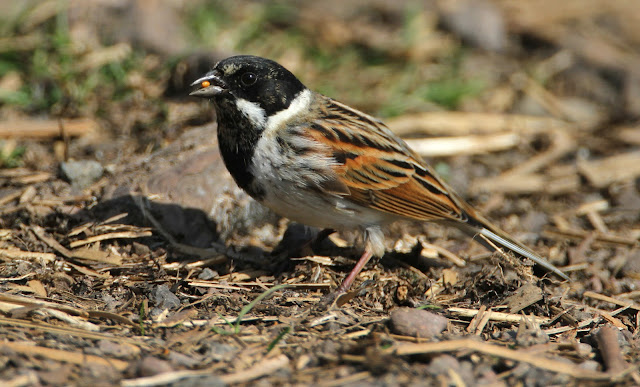 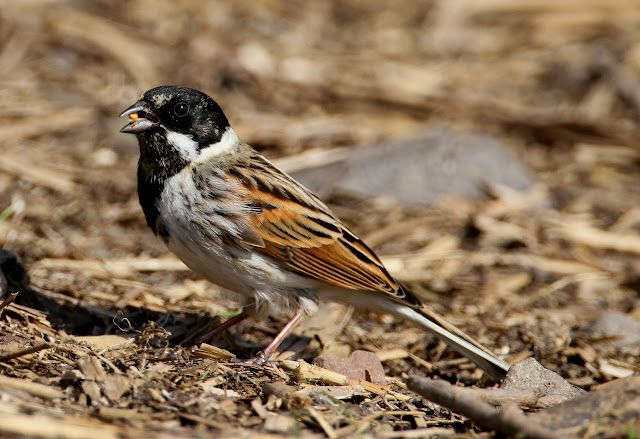 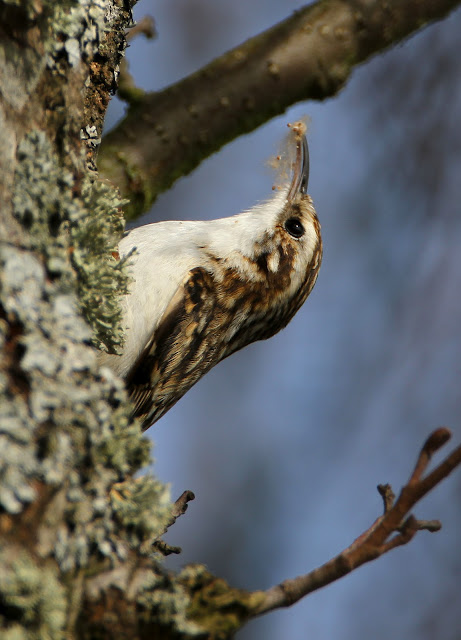 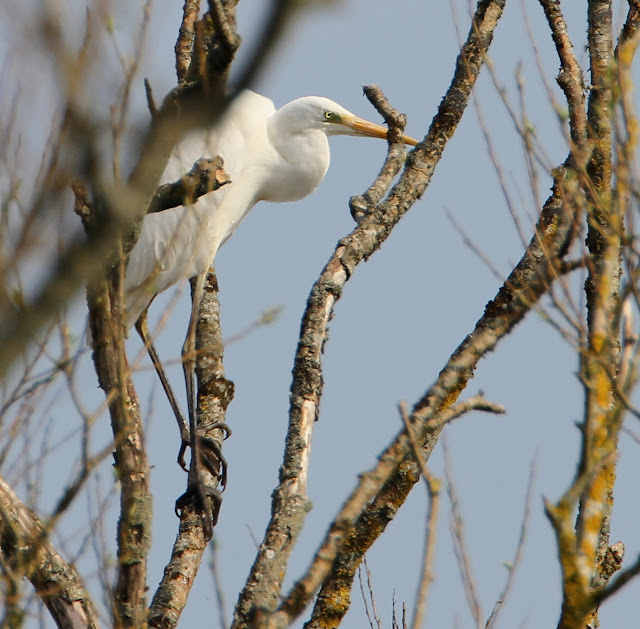 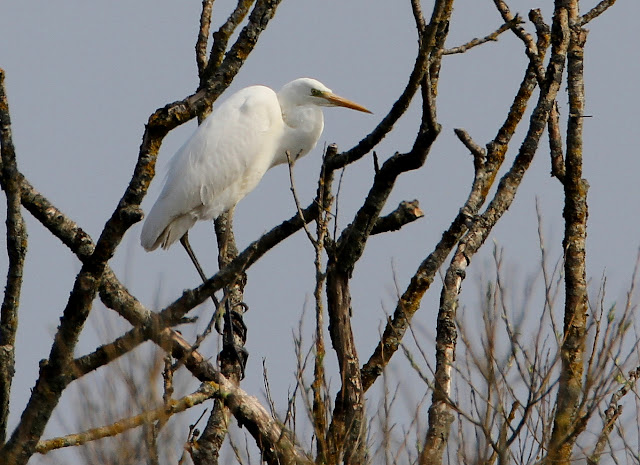 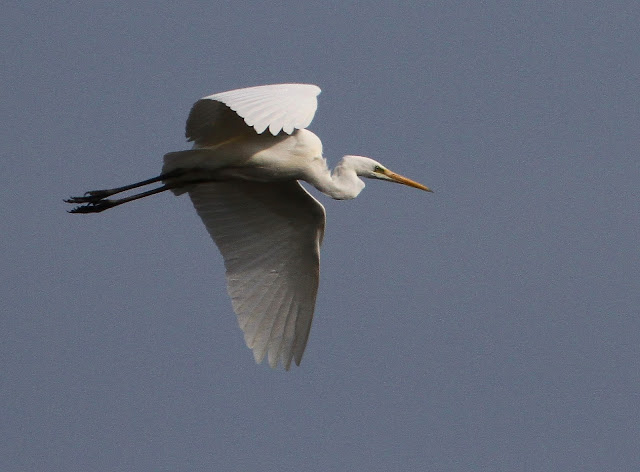 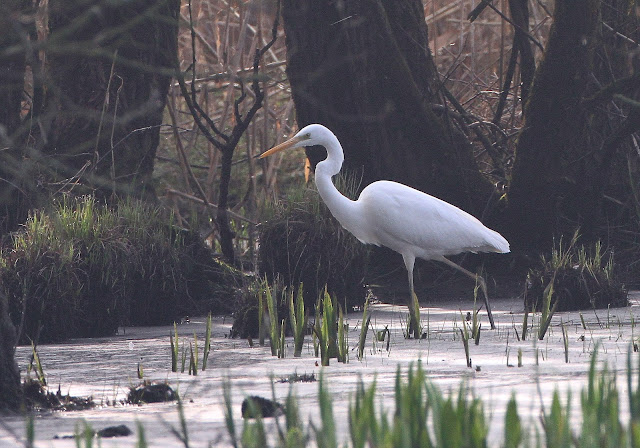 The caravan season started this weekend so Teresa and myself paid our first official visit although we travelled up to Llangors on Saturday and only stayed the one night,too much to sort out on arrival to travel on Friday.
My aim for today was to catch up with the long staying Great White Egret although my intended early start was thwarted with the lake shrouded in mist until about 9.30am.
I settled myself close to it's regular feeding area and the bird flew in after an hour's wait although it stationed itself behind a tree out of view for a lengthy period.
I wanted some good ground shots which proved difficult as I was facing into the sun and couldn't get around to the north side of the bird where there was little cover anyway without spooking it,I did manage a few reasonable record shots though.
Whilst watching the egret I noticed a pair of Treecreepers nest building in a crevice in a nearby tree and managed one nice shot that I was quite pleased with,I'll revisit them in the coming weeks.
I walked back through the fields to the Jeep and popped down to the lakeside for 15mins and whilst there were lots of people around a couple of male Reed Buntings feeding on the shore near the crannog took little notice and posed quite nicely for me.
Can't wait for the spring migrants to arrive although there were Ciffchaffs and Cetti's Warblers singing everywhere,hope the GWE sticks around as well as I'm determined to "nail it".
Posted by Jeff at 3/25/2012 09:59:00 pm 1 comment: Links to this post 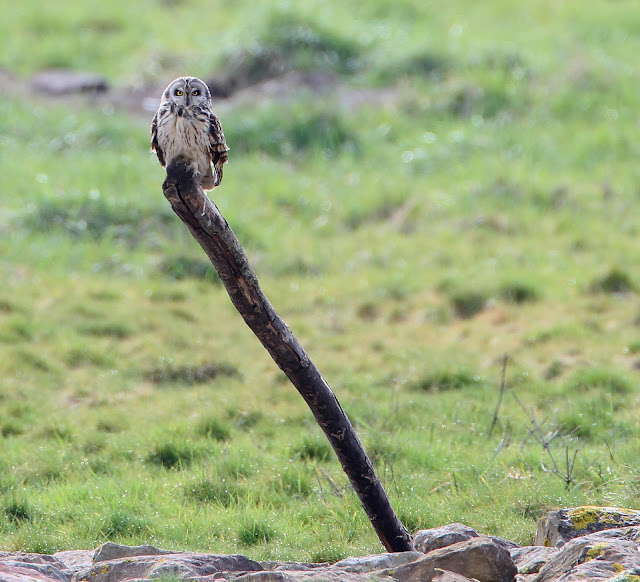 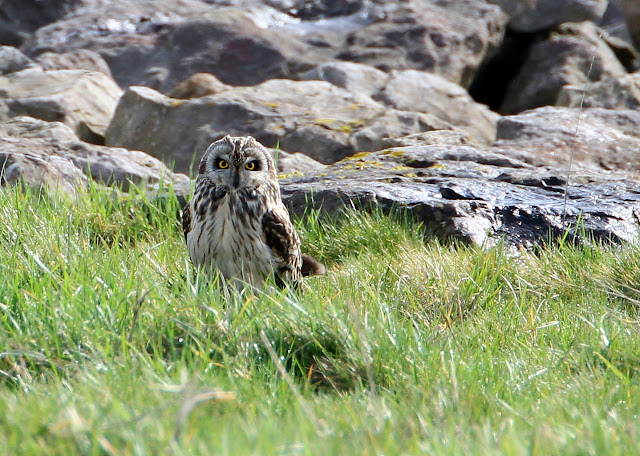 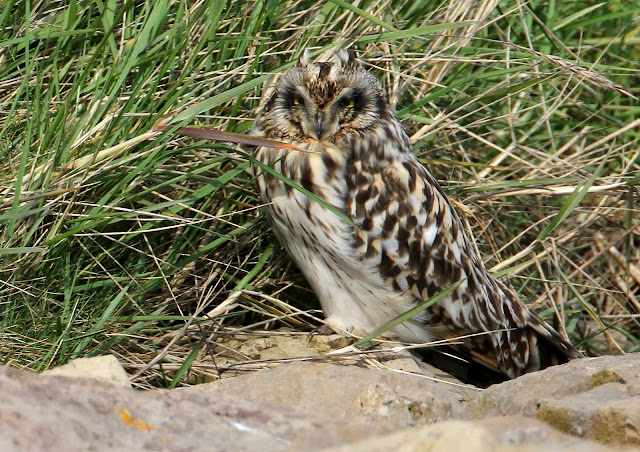 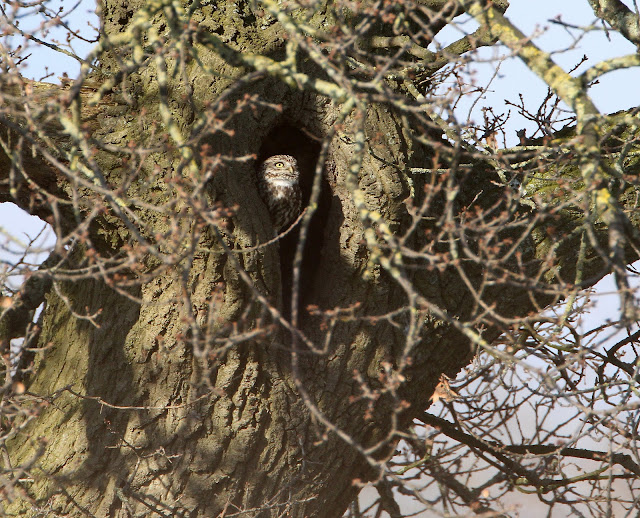 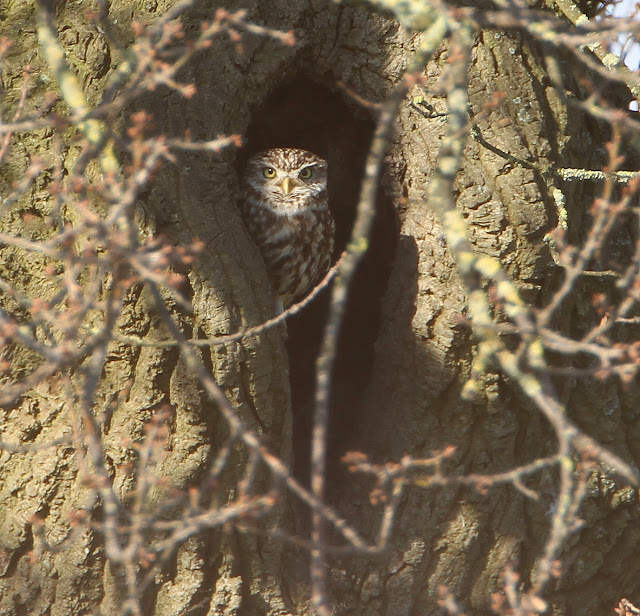 After the euphoria of Saturday and another glorious Grand Slam I decided to have a bit of a lay-in yesterday and then gave "Smudger" a call at 11.00am.Armed with our cameras and long lenses we sauntered on down to the Cardiff foreshore hoping we could refind the recently discovered Long-eared Owl but despite a good search of the area we failed to find the proverbial "needle in a haystack".
We moved on down to RGW where we saw at least 12 Short-eared Owls some of which were reasonably confiding and we both managed a few "keepers".
On our way down to the water treatment works we made a brief diversion down Mardy Lane where one of the local Little Owls made an appearance from the hole in the usual tree in the field.
We dipped on the Bonaparte's Gull (yet again !!) and after another fruitless look for the LEO late p.m we called it a day.
Posted by Jeff at 3/19/2012 08:51:00 pm 2 comments: Links to this post 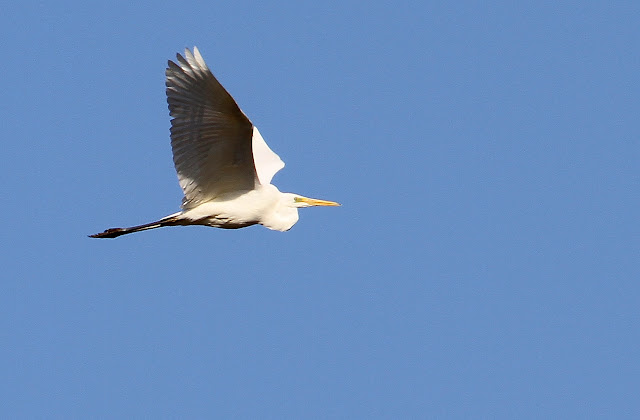 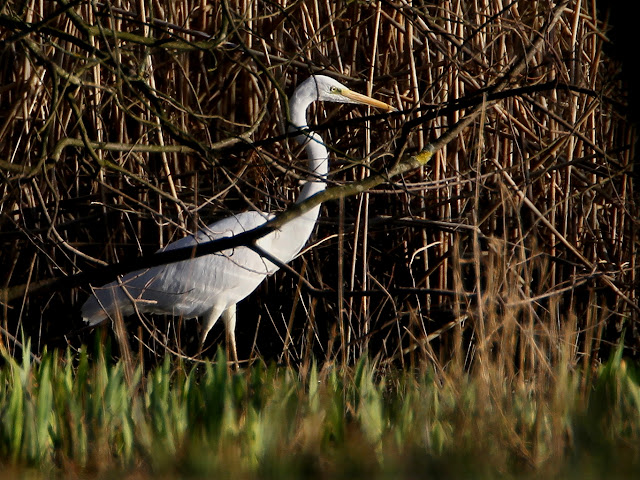 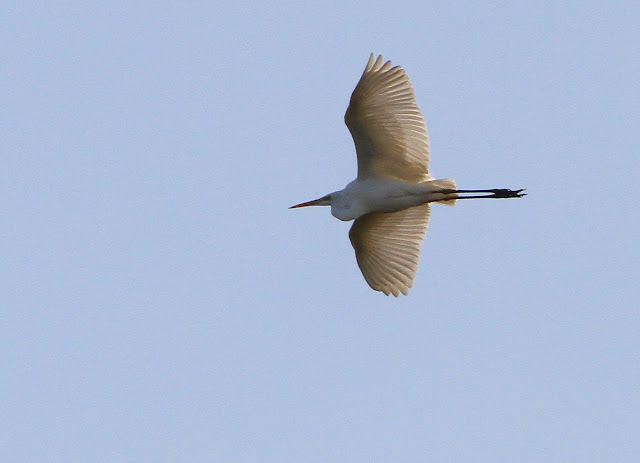 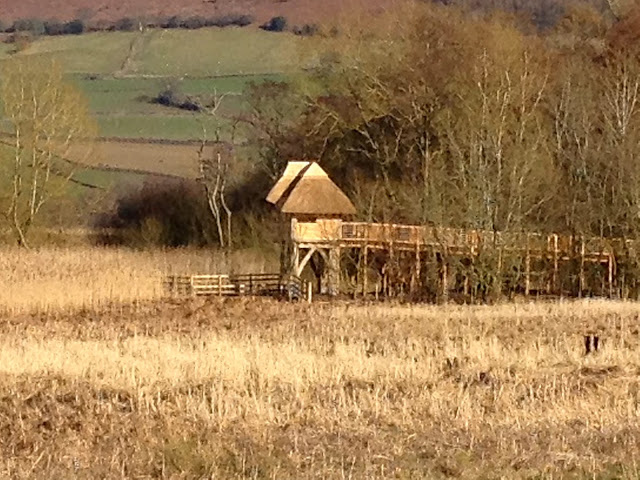 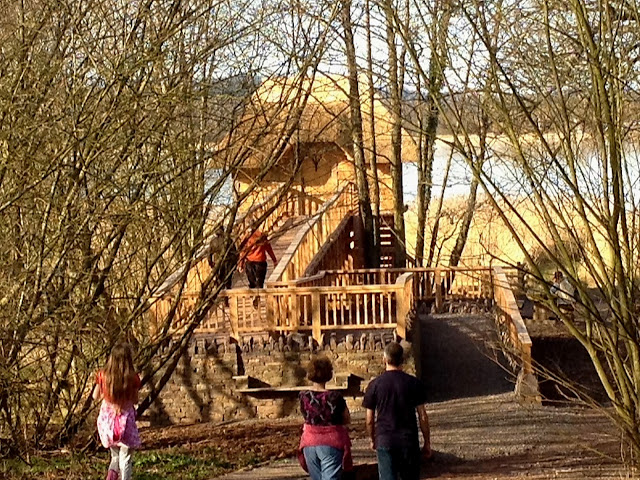 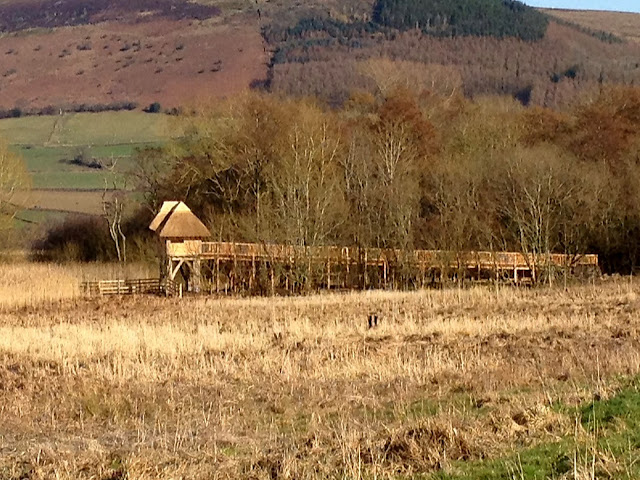 Teresa and myself paid a visit to Llangors on Sunday to check out the caravan before the season starts in a couple of weeks and I took the opportunity of trying to find and photograph the Great White Egret that's been kicking around the lake since last November.
I also wanted to have a look at the replacement hide officially opened by HRH Charlie a couple of weeks ago following it's construction over the winter.
I found the egret feeding in what remains of the winter flood in amongst the willow scrub near the southmost shooting hide but it quickly took to the air and I only managed a few initial flight shots,the bird came back down but in an inaccessible area out of sight.
I then walked around to the new hide for my first visit and I have to say I was mightily impressed,ok given the expense they have gone to in elevating it and constructing the huge access ramp they could have made the actual hide a bit bigger,having said that the views over the reed beds and the lake are impressive.
It's a massive improvement over the original hide and and the elevated views show just how extensive the reedbeds are on the southern side of the lake.
Although quite busy the only serious birdwatcher in the hide was Mark Waldron and it was nice to chat and to put a face to his name that I'm familier with from the Brecknock Birds website.
I saw the egret in flight from the hide land in the same area where I had seen it feeding earlier and made my way back around to the south-west corner where I refound it and managed a couple of record shots before it once again took flight to disappear over the trees out of sight.
I'm hoping the bird stays around for a while and I can catch up with it again and get some better shots,a fly-by fishing Osprey on passage in front of the hide would be nice as well,not too much to ask is it ?
P.S
Apologies for the quality of the pics of the hide,taken with my mobile.