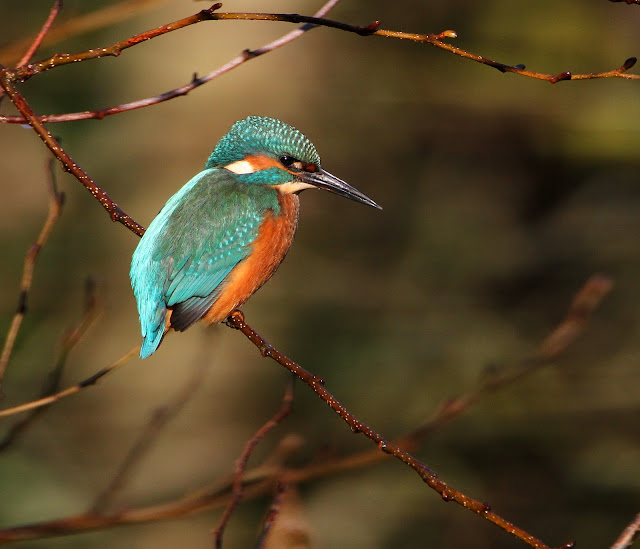 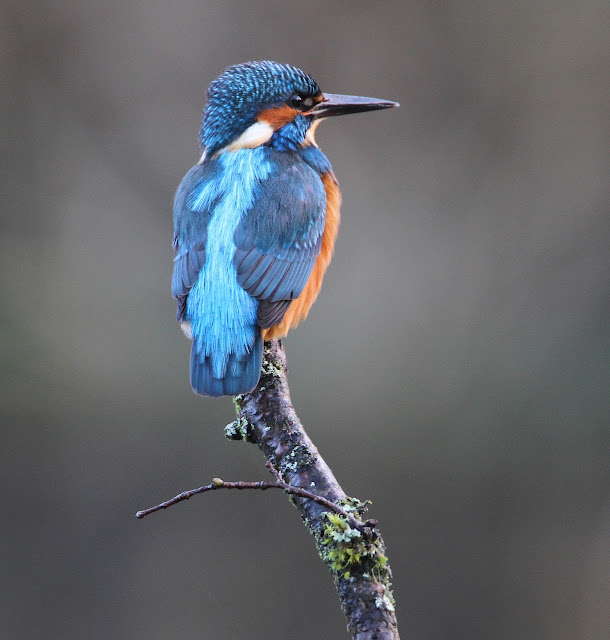 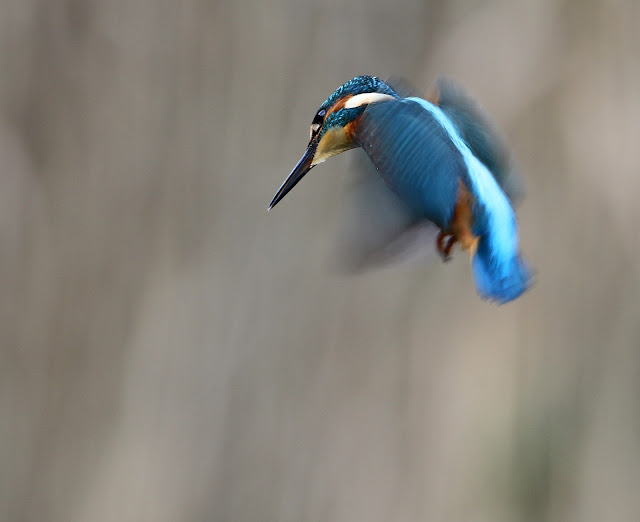 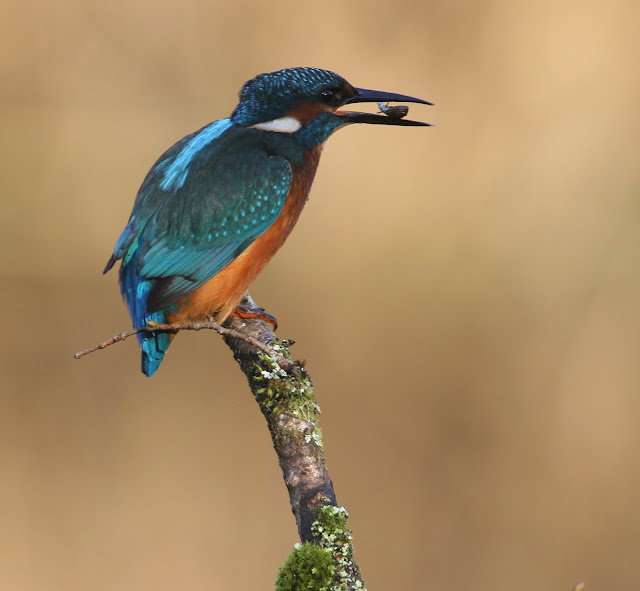 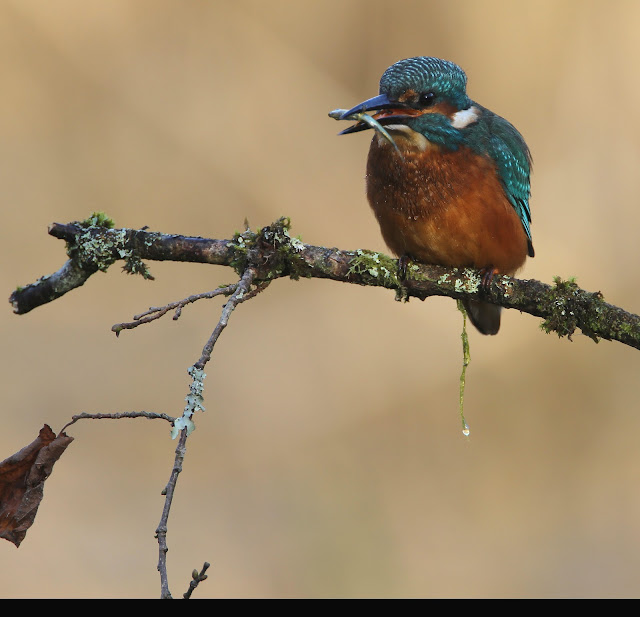 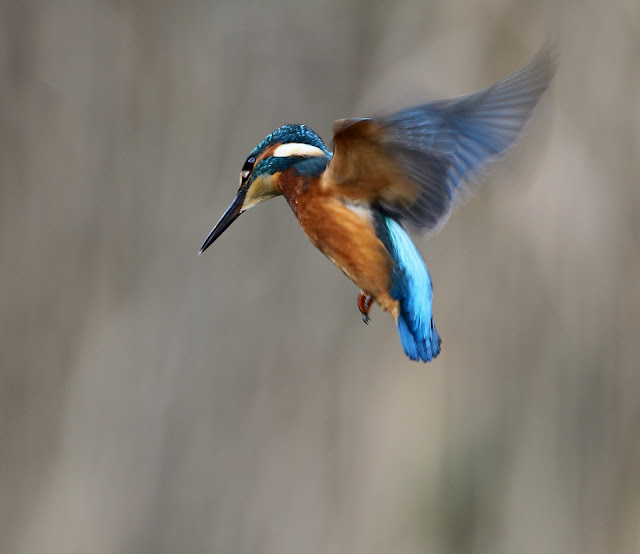 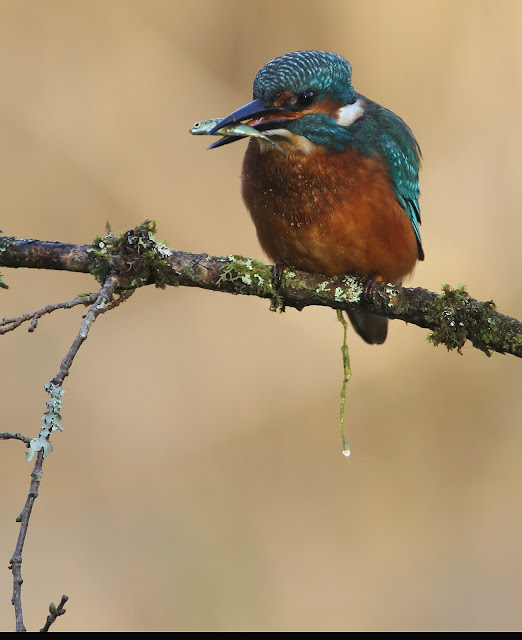 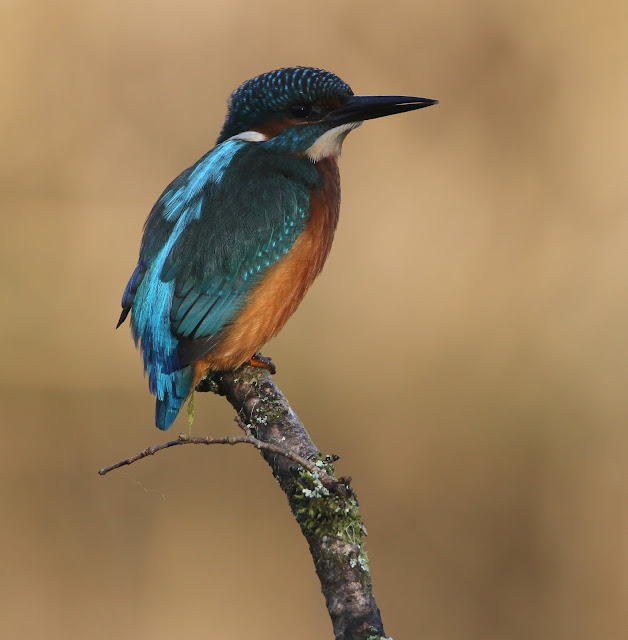 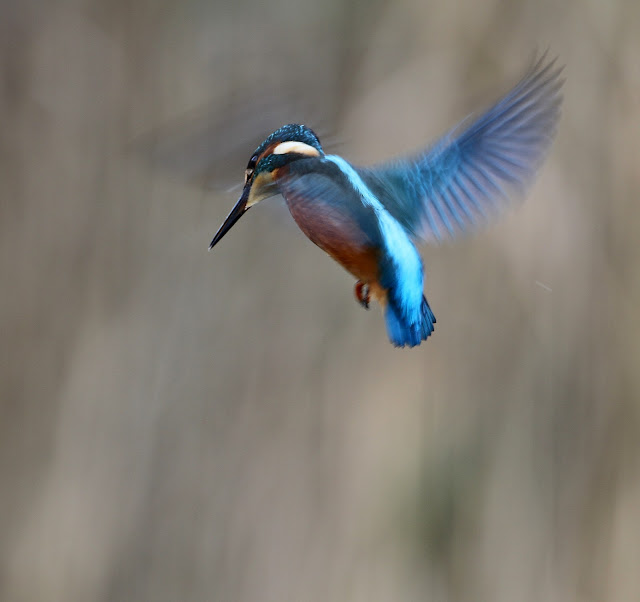 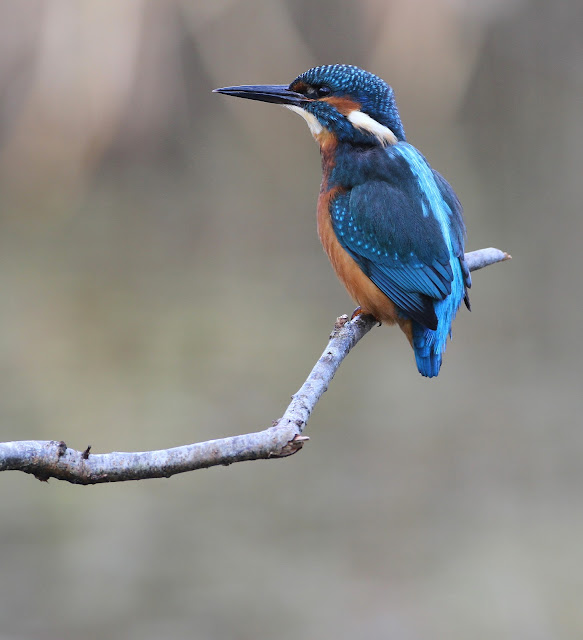 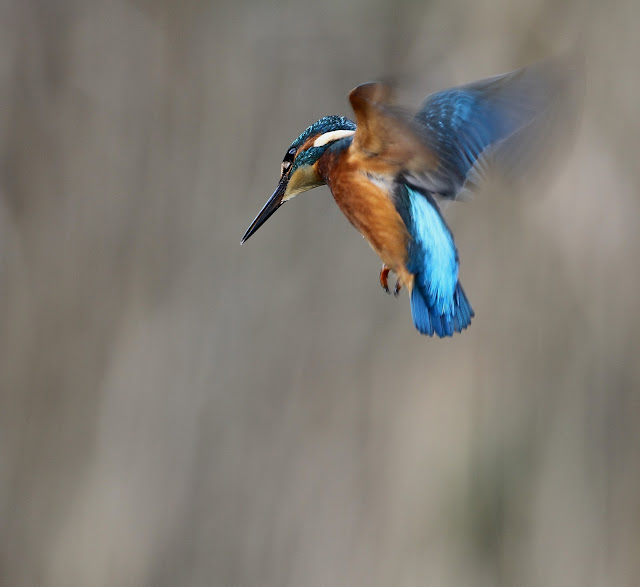 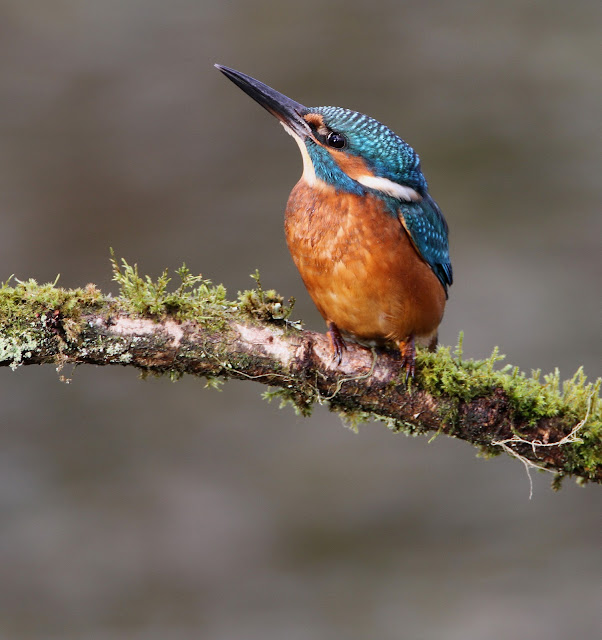 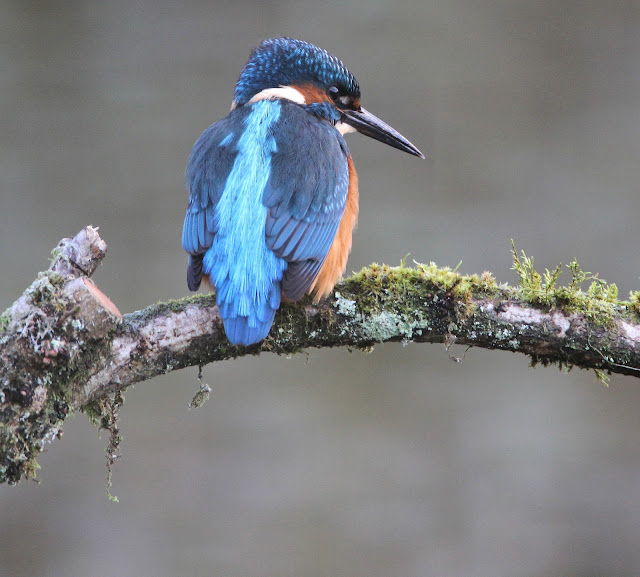 Had a great session at Forest Farm NR today with "Smudger",at least two male birds and a female present,birds elusive and uncooperative for most of day but one performed really well for a short spell mid-afternoon which made the wait very worthwhile.
Posted by Jeff at 11/11/2012 10:31:00 pm 3 comments: Links to this post

The Kingfishers at Forest Farm had taken preference over a stay at the caravan last weekend and what with this being our final weekend of the season it gave me a chance of going for the returning Great Grey Shrike at Mynydd Illtyd on the outskirts of Brecon.
It's a large area of common heathland covered in bracken and gorse and holds amongst it's species Whinchat,Stonechat,Linnet,Meadow Pipit and Skylark.
I rolled up at about 09.30 on Saturday and after passing a small group of Fieldfares feeding in a hawthorn tree the next bird I saw was the shrike hunting from it's perch on one of the bracken bales (cut and harvested for bedding I am told),driver's side of the jeep and not 30' from me !!
There was nowhere to park and so I backed up to the nearest pull-in but on dashing back to the spot found that the bird had disappeared,I'd had cracking close views but the camera was in the boot of the Jeep,DOH !!
I spent the next 3 1/2 hours searching the common but to no avail,I did however come across a flock of c100 Golden Plover which with careful approach work gave me views down to about 20yds and the chance to get some shots in nice light that I was really quite pleased with. 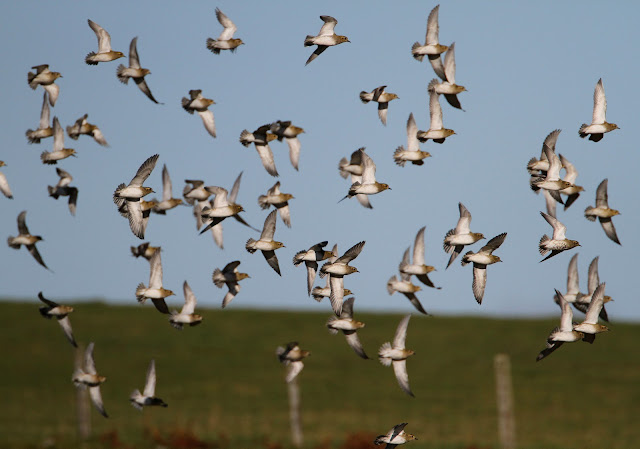 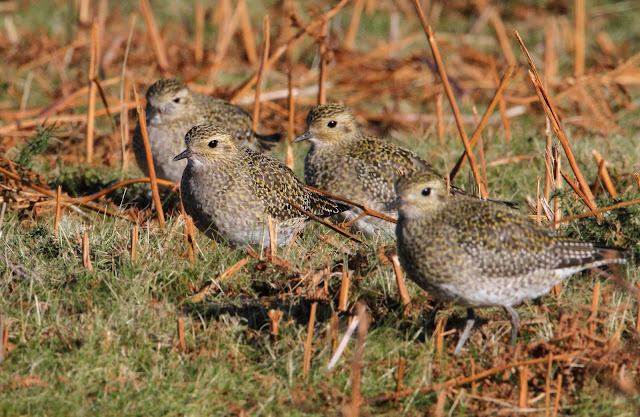 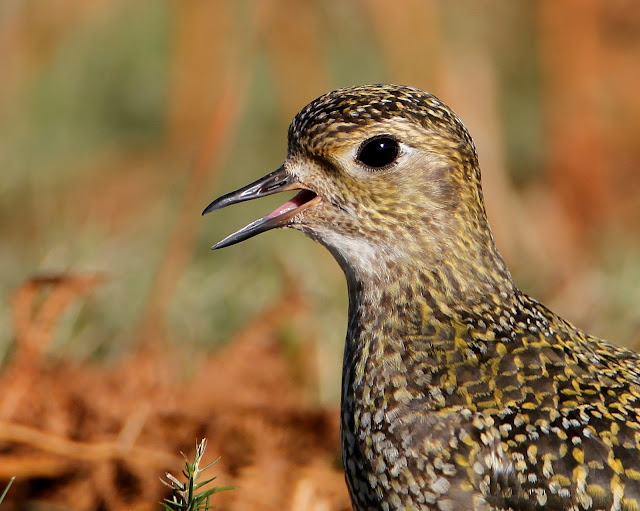 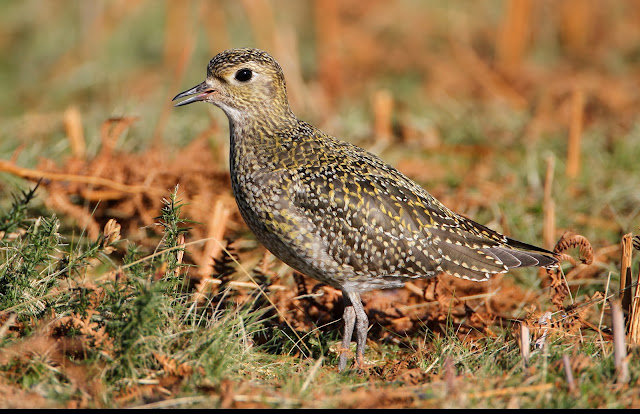 I returned to the Jeep and decided to check out a different area and whilst driving along the common road came across fellow "togger" Steve Wilce setting up his gear.
I've been an admirer of Steve's work in the photo gallery of the Brecknock Birds website for some time but we hadn't ever met until Saturday,we chatted for a while before checking out an area where Steve has located the shrike in previous years.
Within five minutes we had found the bird high on some hawthorn on the far side of a field and it soon relocated to the fenceline between the field and the common. 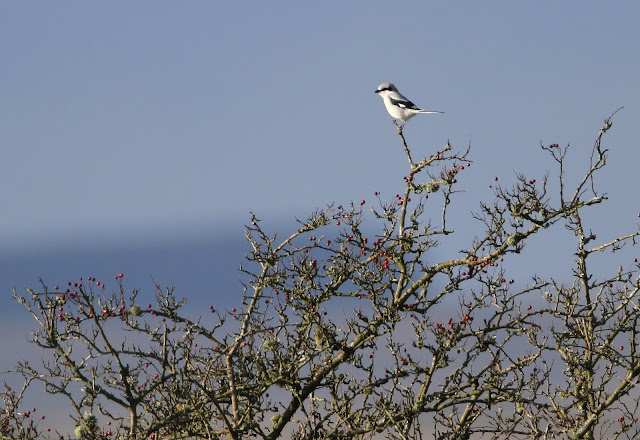 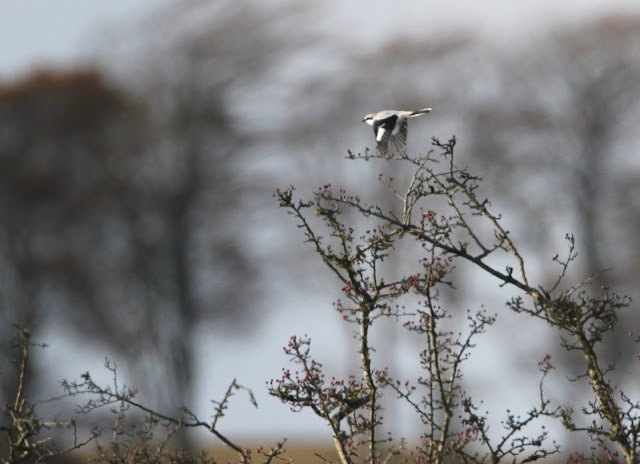 It worked the fenceline hunting for prey and we followed it for over 1/2 mile never getting closer than about 60yds before it eventually disappeared. 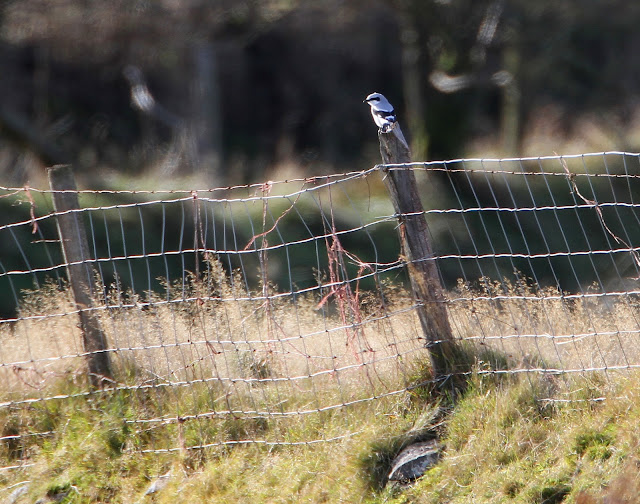 I returned again on Sunday morning meeting up with Steve and we again gave chase to the bird along a different part of the common but never getting any closer than the previous day.
What a frustrating bird to try and photograph,it really gave us the runaround and can disappear for hours on end.
I doubt that will put me off though and I'll probably give it another go a few times over the coming months,"watch this space".....................

There was a cause for celebration - and not a little frustration - for Geth and myself a couple of weeks ago  as we finally reached the milestone of seeing 100 species of birds on our Radyr Floodplain / Forest Farm / Glamorgan Canal local patch.

We've been occasional visitors to this area for the last 10 years or so, but only really started paying it some proper attention around 3 years ago, and found it to be a very productive area - particularly during the spring and autumn migration periods. See here and here.

Having had 99 species on our collective list for almost five months (both of us haven't seen all the birds on the list - Geth's seen 7 species I haven't seen, and I've seen 1 species he hasn't) provided us with plenty of opportunities to try and guess which species would bring up the century mark. Our 99th species was a fly-over Greylag Goose and we wanted the next patch tick to be something a little more special - and less plastic - than that.

We would never have guessed that that bird would be a Hawfinch. A scarce and elusive bird in Glamorgan and a true rarity for the Patch.
The story goes like this . . . . having visited the Patch together early every autumn weekend morning for several weeks, and enjoyed a cracking variety of migrant birds (more of that in our end of year 'Patch Report'), yours truly decided to have a lie in. Geth wasn't such a wimp and got his just reward.

As I sauntered onto the Floodplain and hour and a half after Gethin had arrived there, I received a breathless phone-call from the boy birder informing me that a Hawfinch had just flown over and landed on top of a bush in front of him. Panic! I ran at a speed I haven't matched since my school days and if I could repeat that running performance again I would have a fair chance of getting to Rio 2016. Sadly, (and that's the understatement of the century), I missed the bird by 10 SECONDS!!! It flew down onto the other side of the bush just before I arrived and was never seen again.

Thoughts of writing Gethin out of my Last Will and Testament were short-lived as he has kindly refrained from rubbing salt into my very sore wound.

Back home, Gwenni, Gethin's sister, kindly helped us celebrate this special occasion by baking a Happy 100th Bird-day Cake fit for The Great British Bake Off.
﻿ ﻿
PS We're still waiting for a congratulatory telegram from the Queen.
Posted by Dan at 11/04/2012 04:40:00 pm 1 comment: Links to this post