After a full day in the garden last Saturday giving the lawns their first cut and digging borders etc I thought I'd spend Sunday out in the fabulous weather hoping to catch up with and photograph a few good birds.
A drive along the Maesteg 'Massif' aka Mynydd ty Talwyn yielded a nice flock of Linnets, plenty of Meadow Pipits, a few Skylarks, a couple of comical displaying Ravens and a nice pale Common Buzzard.
I checked out a local wood for Lesser Spotted Woodpecker which proved fruitless and resisted the temptation of calling into Parc Slip NR which was overrun with families with hardly a space available in the car park.
I thought I'd call into St Athan for another crack at the Cattle Egret which upon arrival was in it's regular field tucked up against the boundary fence of the adjacent school.
A grass cutting contractor in the school grounds soon flushed it and it flew the length of the field to the end near the main road bus stop.
Moving down to that end I managed a few 'record' shots and was joined briefly by Paul Fram also from Maesteg until the bird flew a little further away which was my cue to leave. 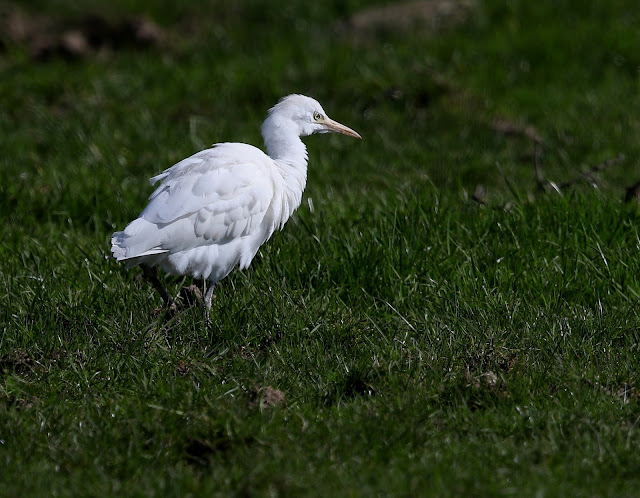 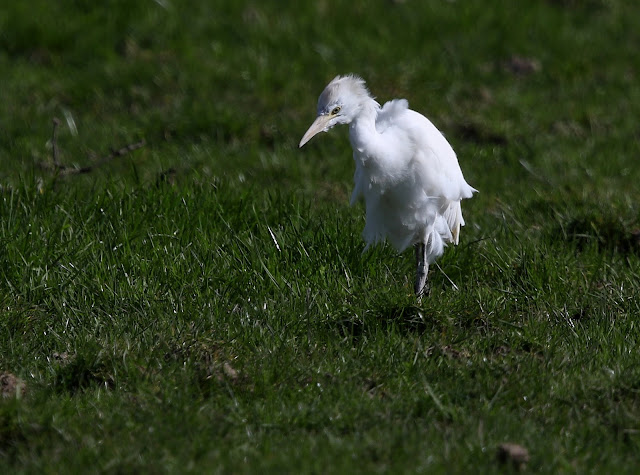 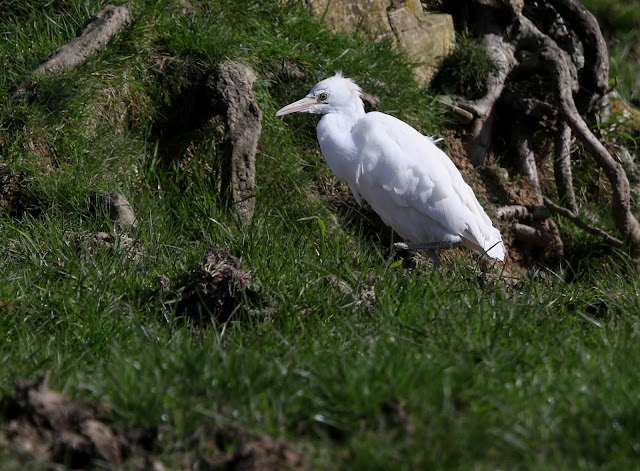 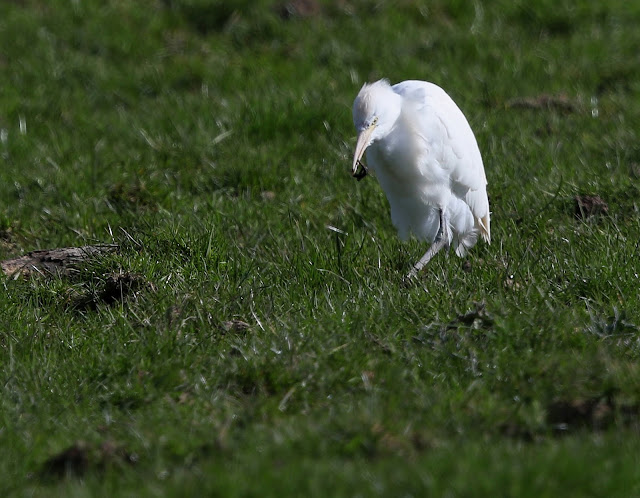 My next port of call was Cosmeston CP which I knew would be overrun with families on such a nice day but was worth a punt for the juvenile Iceland Gull that had been found there the day before.
There were over a hundred gulls present but sadly not the one I was looking for so I pushed on to Cardiff Bay.
Being the cheapskate that I am I parked in the marina and walked to the barrage keeping an eye out for Black Redstart on the way with no luck.
I was hoping for the Long-tailed Duck near the sails but it was nowhere to be seen and most other stuff out in the bay was too distant to be picked up with just 'bins'.
I planned to finish my day at Aust Warth between the two Severn Bridges hoping to connect with one of the four Short-eared Owls that had been showing well there during the week.
A pair of Kestrels hunting provided a photo opportunity whilst waiting for an owl to show...... 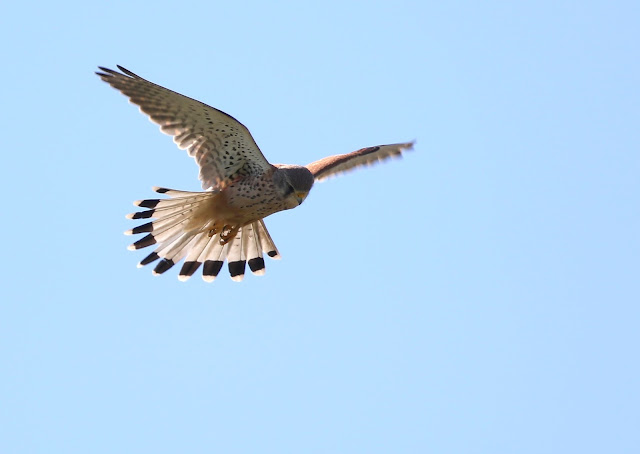 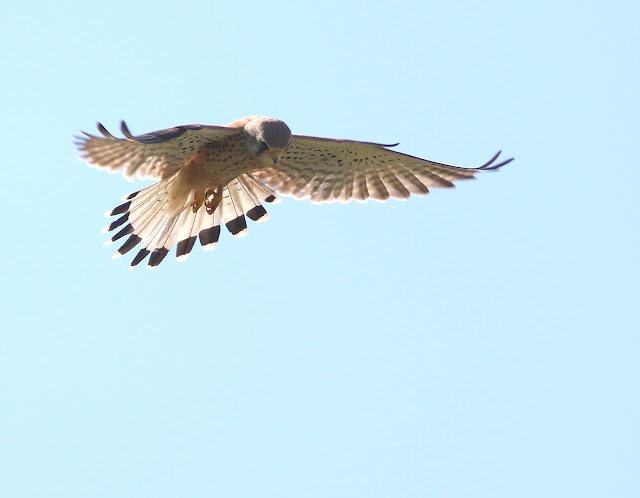 I was joined by two local 'toggers' and at 5.00pm two 'Shorties' showed in the distance down channel towards the second crossing but went to ground and did not reappear, I stayed for another hour and then called it a day.
A phone call from Steve Howcroft in work on Monday morning alerted me to a Ring-necked Duck found on the East Lake at Cosmeston CP, why couldn't the bloody thing have been there when I was there the day before, aaarrrgh !!
I made up my mind to go for it after work and managed to get there by 6.30pm whilst the light was still reasonable, the bird was showing well in company with a group of Tufted Ducks although the light was tricky with the setting sun and I managed a few shots........ 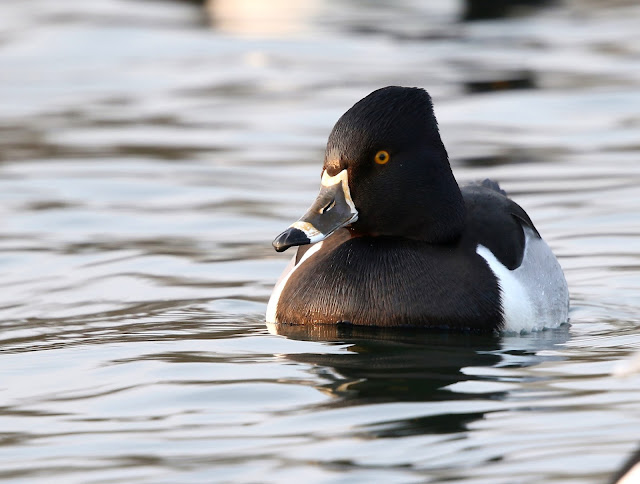 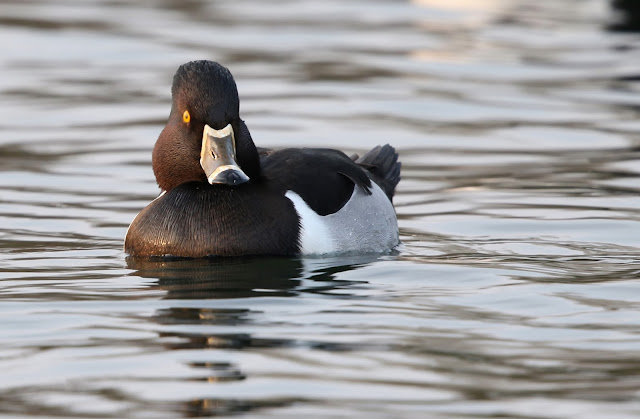 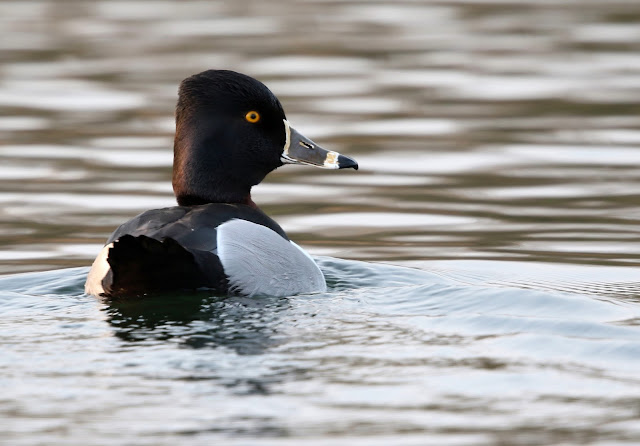 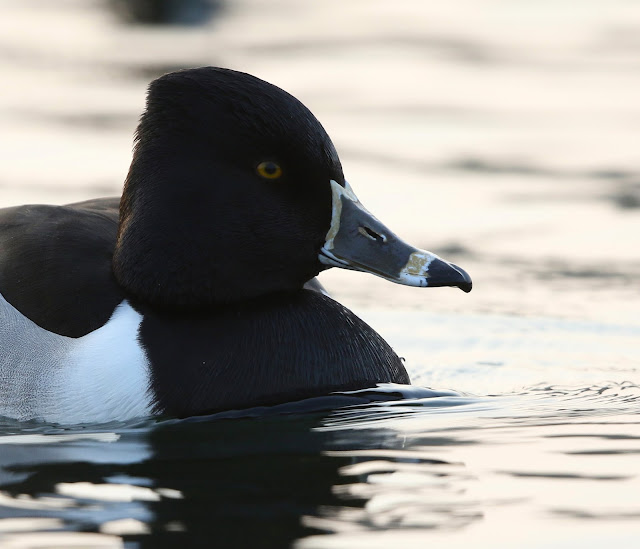 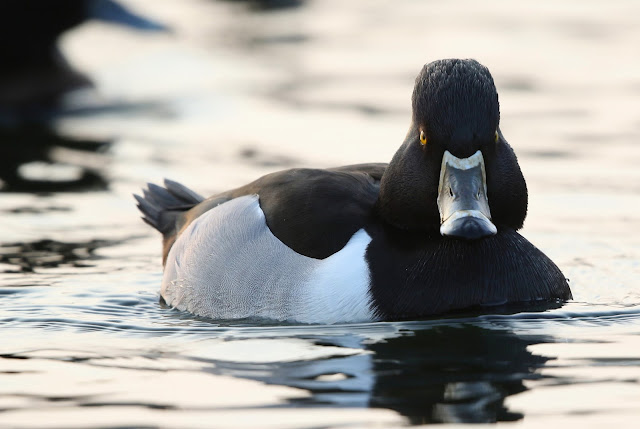 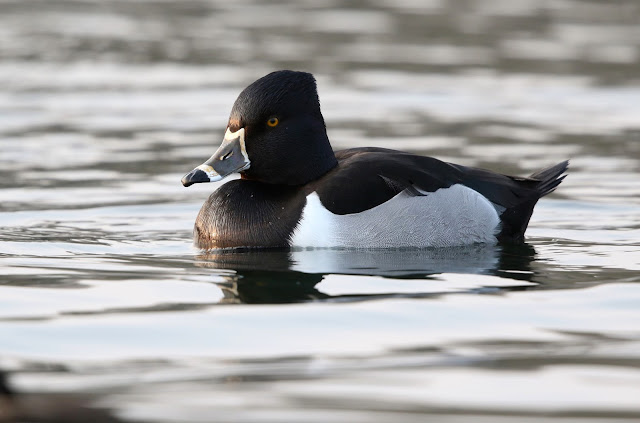 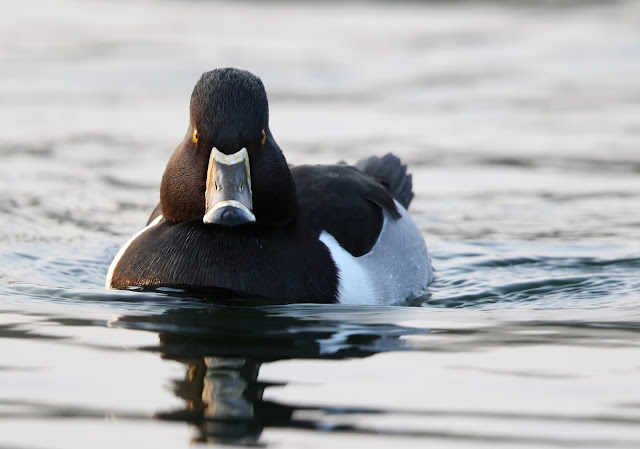 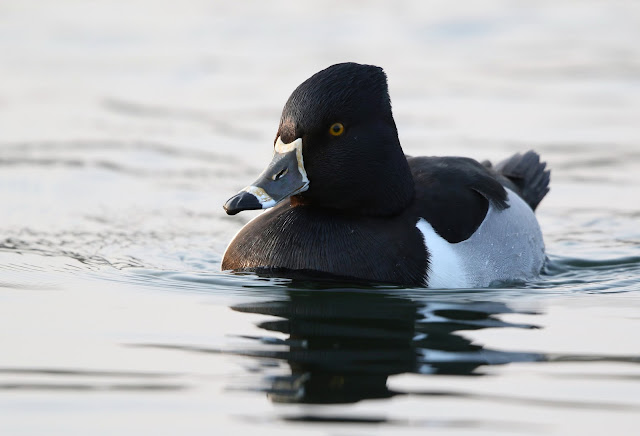 I guess the RND made up for the disappointing Sunday and was only the second sighting of the species in Glamorgan for me to add to three that I've seen elsewhere in the UK.
Posted by Jeff at 3/28/2017 08:51:00 pm No comments: Links to this post

After something of a 'couch potato' day last Saturday watching the Six Nations rugby final round of matches I thought I'd get a little fresh air on Sunday morning with a visit to St Athan hoping for some photographs of the Cattle Egret which had been found last Wednesday by Matt Meehan, another great find by Matt who is on something of a roll at the moment.
I rocked up at it's favoured field adjacent the main road near the T junction and whilst watching the bird from the metal entrance gate was joined by Steve Hinton.
The bird was associating with the cattle in the field as the species does but was a little too distant for any worthwhile shots.
Steve left and I moved down to a spot near the bus shelter where the bird was a little nearer and was joined firstly by Alun Hughes who was making a flying visit and then by Paul Denning who was also hoping for some photographs.
The bird never came close enough for any really meaningful photos but I managed some 'record' shots that I was reasonably pleased with considering the distance.......... 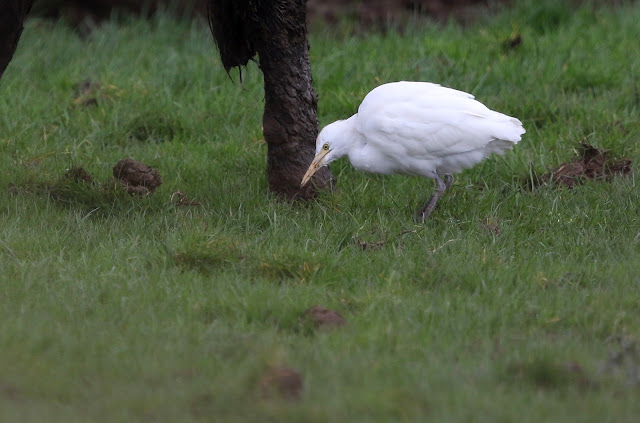 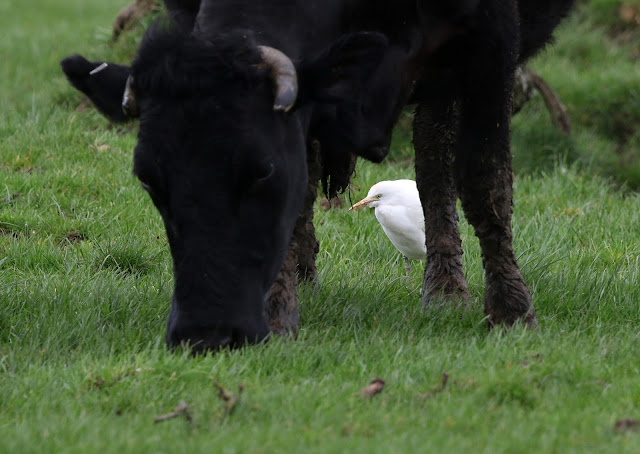 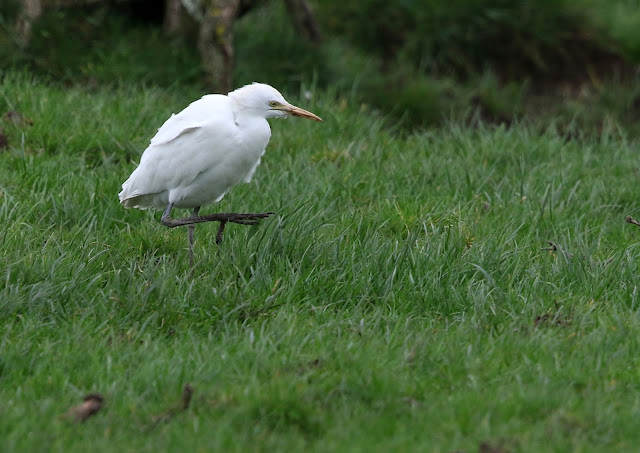 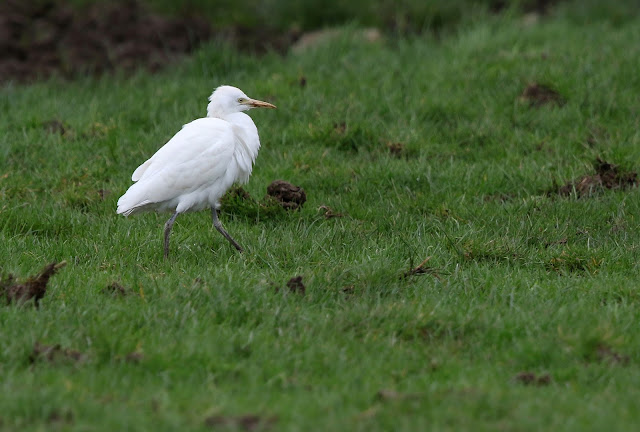 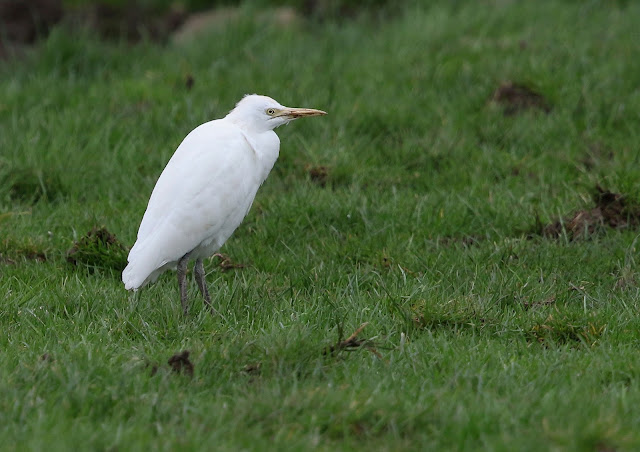 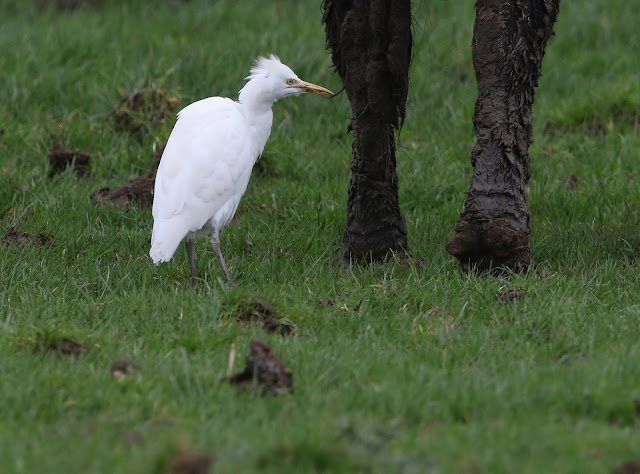 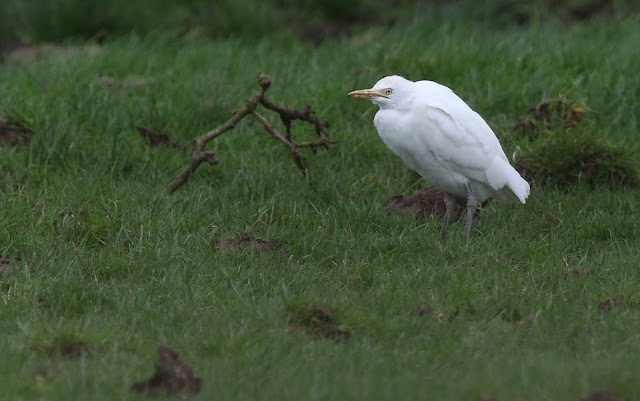 Not done a lot or posted anything for a while what with the Six Nations rugby on weekends and carrying out some decorating at home so only a few shots of a fine wintering male Black Redstart at Plas Taliesin on Penarth Marina taken during a search a few weeks ago for the two juvenile Glaucous Gulls at Cardiff Bay.
Managed to find the pale one of the two birds but it was too far away on the port authority building roof for any photographs........ 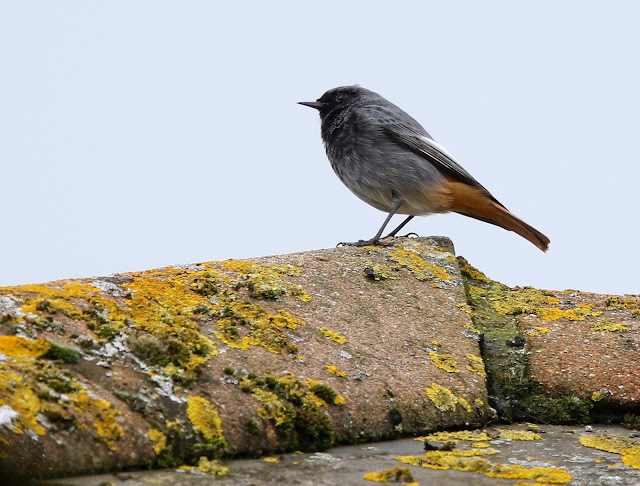 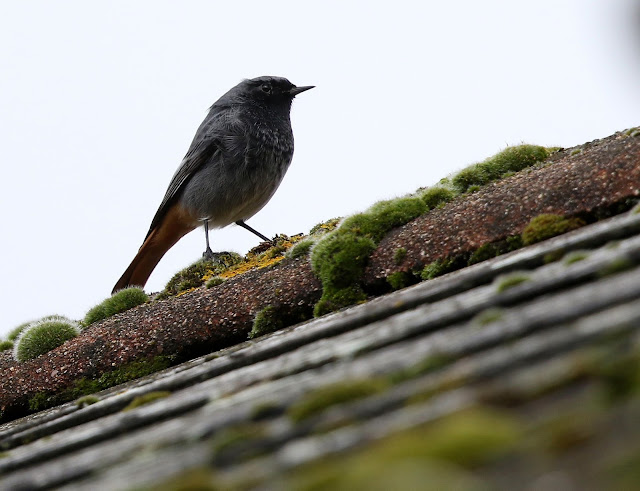 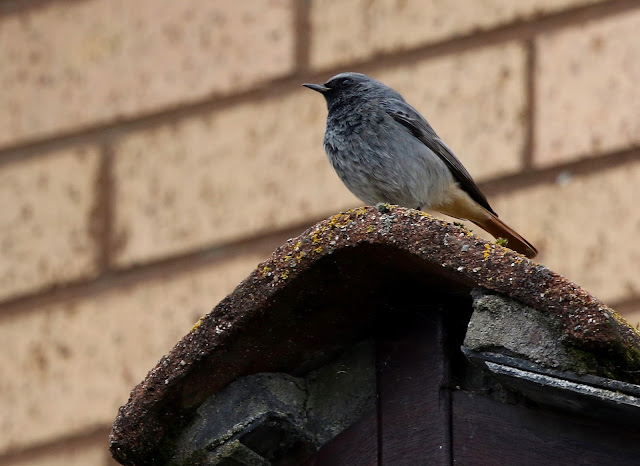 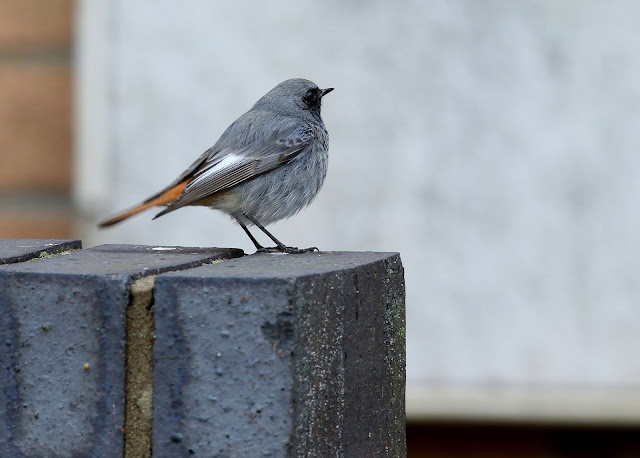 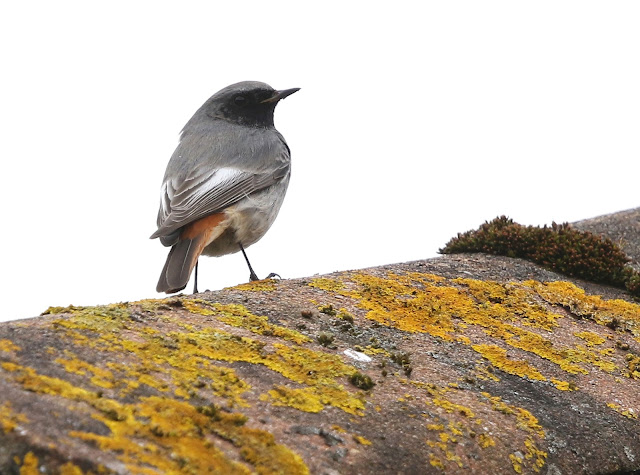 Unfortunately the redstart didn't play ball and stayed up on the roofs for the time I spent trying to photograph it, only once did it drop briefly on to one of the low walls and that was only for about 5 seconds.
Posted by Jeff at 3/21/2017 08:48:00 pm No comments: Links to this post