A spot of excitement 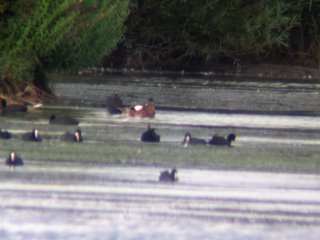 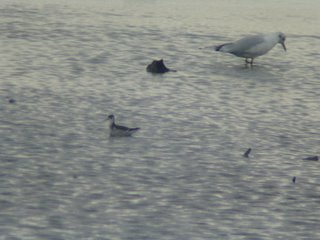 Two rarities, one quite exciting, and one sooo dull it took me nearly two months to drive the couple of miles to see the now eclipse American Wigeon in Cardiff Bay. NB I wasn't driving slowly! It took nearly two months to get motivated to see the bird! The Red Necked Phalarope at Goldcliff on Tuesday was far more fun, though no easier to photograph. If only I'd been able to find the alleged Ortolan near Llanbradach that evening.....
Posted by Tim Hall at 8/17/2006 09:30:00 pm 3 comments: Links to this post

Yo Ho Ho and a Barrel of Chum

Having finally left full-time employment on August 4th I decided to make up for the two months of in the birding desert by going out for a couple of 'all dayers' - birding that is, not drinking. Monday, August 7th found be bright and early, and very wet, at Llanilid. It poured down, but I didn't care - it was better than being in the office. My main target was Greenshank which I still haven't ticked in Glamorgan this year. There'd been two or three seen at Llanilid over the previous couple of days but they'd quite sensibly naffed off to seek sunnier climes. There was also no sign of the Yellow Wagtail or Red-legged Partridge (both needed for my Glam year list) which had also been reported there over the weekend. A bad start to the day, but at least it was nice to see that, after all the fuss about developing the site, they've so far made very little progress. The weather was brightening up and so on I went to the Ogmore Est in the hope of picking up some early returning waders. A couple of Curlew and Common Sandpipers did little to lift my spirits. I trudged back to the car. This wasn't how my first day of 'freedom' was supposed to be. "Right", I thought, "I'll go looking for Grey Partridge along the Heritage Coast". Ever the glutton for punishment. I still haven't connected with either species of partridge in Glamorgan. I predictably drew a blank at Ty'n-y-Cae and Lan Farms, although 4 singing male Yellowhammers in the area was nice to see. But my luck was about to change. On the way to Gileston I noticed a raptor flying low over a field of maize. It didn't look right for a Buzzard and I pulled in quickly. Bins up and there, no more than 50 - 60 metres away was a female Marsh Harrier. I watched her for 10 minutes - it was like being back in Norfolk again! My spirits lifted I headed onto Gileston. Dipped on Grey Partridge there too but a pair of Stock Dove in the field brought up the 150 for my East Glamorgan year list, and 156 for my Glam year list. The following day I went up to Mynydd Eglwysilian for Whinchat. No calling Quail there this year but a female and juv Whinchat duly obliged - year tick. I still need Ring Ouzel for my year list and on I went to Llyn Craig Fawr where Colin Richards had reported seeing a male a week or two ago. I missed the turning to Treherbert and found myself heading down the A465 to Neath, with no prospect of being able to turn around for miles. "Blast!" (or words to that effect). But, the birding gods were out to make amends for the Monty's Marathon. There above me was a Red Kite. Just as I was celebrating I noticed the sign saying that I was now entering 'Neath Port Talbot' - the damn bird was flying 100m on the wrong side of the border for me to tick it on both my lists. "Blast!" (or words to that effect). Foot down off I went to Glyn Neath to turn round as fast as I could. On my way back I parked in a lay by on the border and prayed for the kite to fly just 200m west. After an agonizing wait I re-found it, flying away from me towards Hirwaun. Back of the net! And that's where my luck ran out. I had a lovely time at Llyn Craig Fawr but I didn't see a Ring Ousel. I also went to Cardiff Bay and the Water Treatment Works at Cardiff Foreshore this morning to try for Black-tailed Godwit - no luck there either. My East Glam Year List now stands at 152, my Glam Year List on 158, and my (sad little) Year List is on 183. I've got some humongous gaps in my EG and G Year Lists. Any info on both Tawny and Barn Owl, as well as Hobby would be gratefully accepted. As would some company to go looking for Glamorgan Red Grouse. The other 'gaps' I'll hopefully fill as the year goes on.
Posted by Dan at 8/09/2006 01:54:00 pm 2 comments: Links to this post

A visit to Goldcliff late this afternoon, enabled my yearlist to creak forward a little, and finally move past last year's effort. At least 3 green sandpipers from the first platform and a lone wood sandpiper from the second platform were new for this year. Other waders on view were lapwings, 2 snipes, ringed and little ringed plovers, dunlins, redshanks, a black-tailed godwit, a common sandpiper and at least 7 greenshanks. A common tern roosting on a mudbank and male merlin hunting and settling on platform 3 added interest. Especially since I was on platform 2! A couple of clouded yellows and a painted lady were the highlights of relatively few butterflies on the wing.
Posted by Wayne at 8/08/2006 08:21:00 pm No comments: Links to this post 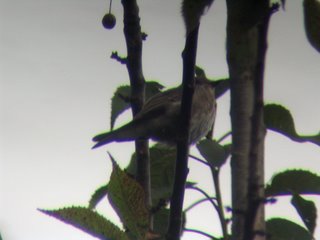 An intriguing couple of entries on Gwent Ornothological Society led me to Minniet Woods near Rogiet, to look for Hawfinches in Cherry trees, bizarre, but in the "Dead Zone" of a South Wales summer, it was worth a try.

I found a brace of Bowdens onsite, and Paul confirmed that there were Bignoses around, but not showing well. Sure enough, shadowy plump shapes were glimpsed, and a brief flight view obtained.

However, Spotted Flycatchers were performing well in the treetops, and this one paused long enough to have a few poor photos taken.

A couple of Wood Sandpipers and half a dozen Greenshanks at Goldcliff on the way back were encouraging, though the very low water levels there are a worry at present.