A text from Dan invited me to join him and The Twitchmeister at Cosmeston C.P to see the Lesser Scaup which had been found the previous day.
The park mid-morning was generally busy and there were several familiar birding faces to greet us upon arrival,Martin Bell got us quickly on to the bird which was with the other wildfowl on the East lake.
Soon after we had arrived we were joined by Tim who had made his own way to the twitch.
We joined John Wilson and walked up to the other end of the lake for better views,after watching the bird for several minutes it involuntarilly relocated with a group of Tufties on to the West Lake where I believe it stayed for most of the day.
Together with several other birders we walked over to the West lake catching brief views of the Bearded Tit in the reeds along the boardwalk.
The bird was soon relocated and provided excellent views for several birders from the bank at the "near" end of the lake as it bobbed in and out of the reeds.
This was my 4th Lesser Scaup having seen previous birds (all drakes) at Exminster Marshes,
Ouse Washes and Cheddar Reservoir.
I spoke to Wayne on the phone later in the day who confirmed that he had been along on a family outing(as you do when there's a rare bird about !!) and enjoyed good views of the bird in the afternoon.
Strange but true fact: myself and Wayne have both seen 4 Lesser Scaup and they have all been the same birds as we have either been in each other's company or as on this occasion a local bird visited separately.
Posted by Jeff at 12/29/2008 03:05:00 pm 2 comments: Links to this post 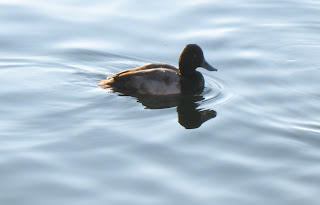 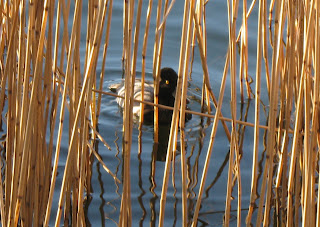 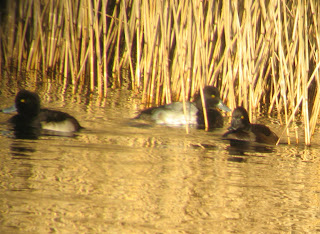 Dipped in Lydney a couple of weeks ago, dipped yesterday cos Rosie got fed up in the cold, nearly dipped today, as it had been disturbed earlier.
Good to see the Boxers Boys in action. Flipping cold, though!
Posted by Tim Hall at 12/27/2008 07:13:00 pm No comments: Links to this post 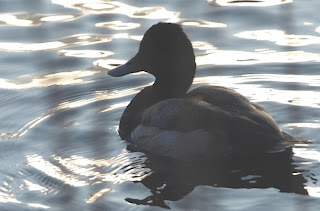 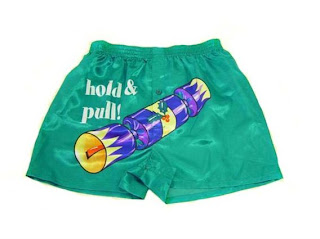 The 'Boxer Boys' would like to wish a very Merry Christmas to our reader(s) and our best wishes for a cracking year's birding in 2009 - may the new year bring us all shed loads of lifers. Good luck if you're Year Listing. Whichever list you'll be keeping may you at the very least beat your own PB and hopefully smash a record or two - particularly if it's a list within 'Glamorgan'.
The Twitchmeister has had an early Christmas present - being named 'Young Birder of the Year' by members of the Cardiff Bird Club. Thanks boys - he was well chuffed. Upon being told of this honour he replied "Wot's the prize? Is it a new telescope?"!!!!
Jeff, Tim, Wayne, Dan and the Twitchmeister.
Posted by Dan at 12/23/2008 10:13:00 am No comments: Links to this post 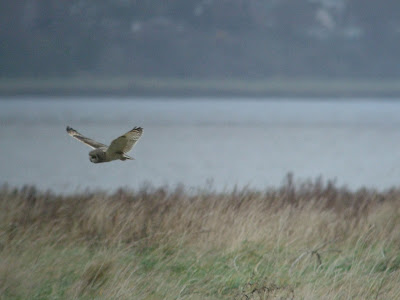 With Christmas beckonning and having bought very little in the way of presents for Teresa up to now I thought I'd rack up a shedload of "brownie" points by treating her to a day out over at the new Cabot's Circus shopping centre in Bristol which opened last September.
We got there for 11.00am as the shops were opening which would mean that we could leave at about 2.30pm just giving me enough good daylight to catch up for a second time with the Short Eared Owls over-wintering at Aust Warth between the two Severn crossings.
We got to the location and found out from one of the locals who had already been there for a couple of hours that the owls had yet to show.
We decided to give it half an hour as the weather wasn't very owl friendly with a gusty wind off the estuary and drizzle in the air. 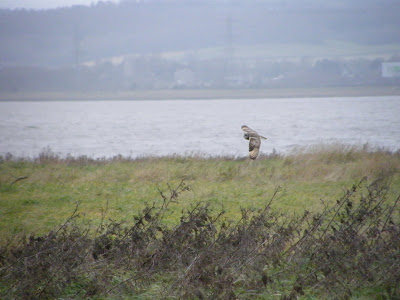 After about 20 mins one appeared from nowhere as they do and started hunting over the grass.
I'd come well armed this time with bins,'scope and two cameras as you do for all shopping trips and although the weather wasn't conducive to digi-scoping decided to give it a go with pretty average results. 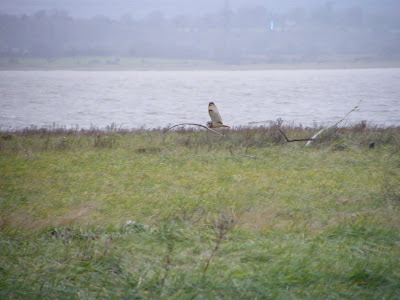 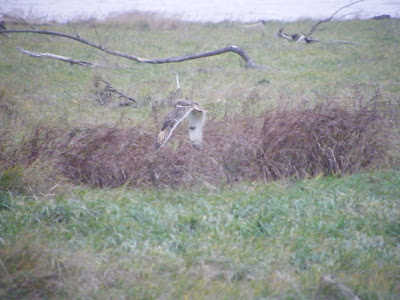 Another SEO appeared briefly and for a couple of minutes there were two in flight hunting but the moment was short lived as the second owl soon went to ground.
It appeared that the keen wind was enough to put the one remaining owl off perching as it continued to quarter the area,a pity as it's always easier to digi-scope a perching bird than one in flight. 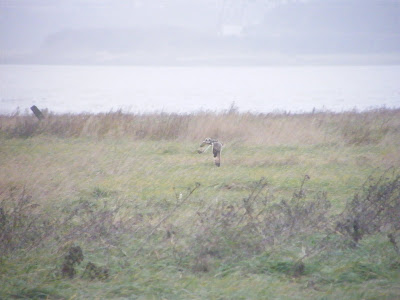 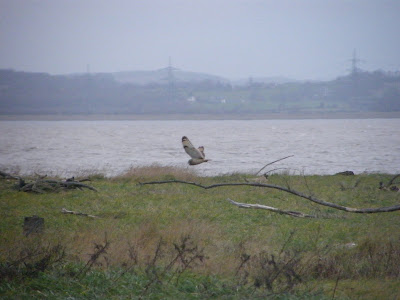 The weather was closing in and with the feeling quickly draining from my hands we decided to call it a day and head for home,I must admit that given the dismal weather I wasn't bargaining on seeing the owls at all so to see one perform well for at least 45 mins was a real bonus !!

I've only tried video recording from my digital still camera a couple of times previously,it's a function that I always seem to forget about so with still photography difficult I decided to give it a go,not sure how this is going to turn out but hope it's ok !!

Sunday 7th Dec PM.
Having deposited Rosie at Grannies, Gill and I headed o'er t'owd bridge into sunny England. On the way, a Fieldfare had a close encounter with our car on the M48, and a large flock of Golden Plover were in a roadside field.
On arrival at Aust Warth, at least 50 birders were scanning the rough ground next to the estuary. A quick look revealed a Short Eared Owl on a post, and soon two more were flying around. They frequently went down for prey, and gave good views on the ground. 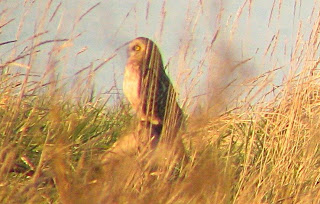 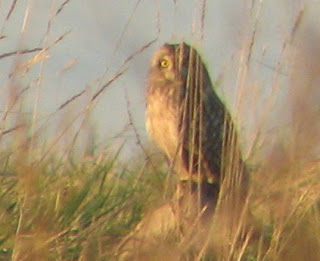 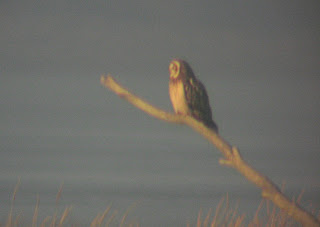 We watched these three beauties for quite a while, and then headed to Avonmouth Sewage Works, where I glimpsed a Ruddy Duck taking cover, before the square pond there was shrouded in mist.
Posted by Tim Hall at 12/09/2008 02:00:00 pm 8 comments: Links to this post

Ah, yes - the annual evening of debauchery, womanising, drunken revelry, public nudity and fighting that is the 'Birders in Boxers Christmas Bash'.

It all started with an unplanned mammoth pub crawl, which began at the 'The Corner House', Llangynwyd and finished one pub later, across the road, at the 'Old House', Llangynwyd. It was unplanned because we aimed to spend our evening carousing at 'The Corner House'. But, because we hadn't booked a table, there was 'no room at the inn' and so the Three Wise Men (and Jeff too) hastily re-arranged the evening's itinerary and made for the 'Old House'. 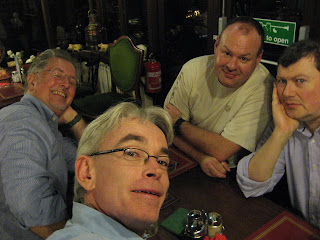 My God, look at the state of us!
While the beer flowed we re-lived the birding year that was 2008. We all agreed that, on the whole, it was crap. Year List Totals were so embarassingly low that they cannot be published. There were highlights during the year of course. The trip to Speyside in May really stood out even though Tim couldn't make it (or perhaps because Tim couldn't make it?!). During the evening plans were also made for 2009: 'Scottish Trip II (Mull) in May' is already booked; as is an August Scilly Pelagic (Wayne and Dan). A long overdue BiB trip to Cornwall in October was pencilled in and a firm commitment to "go to Norfolk sometime" was also made.
Following a boozy lock-in - we must have been there until at least 11.40pm - we traipsed home to our wives to sleep off our excesses.
PS I lied about the debauchery, womanising, drunken revelry, public nudity and fighting.
Posted by Dan at 12/07/2008 07:08:00 pm 3 comments: Links to this post

I realised that Venus and Jupiter should be close together on 1st December, and as it was a clear afternoon, I had a look about 4pm. I could see Jupiter and a crescent moon.....but where was Venus?
The only place it could be was behind the moon! A quick check of t'internet confirmed this, and I discovered that Venus would reappear at about ten past five. Sure enough it did, and the pictures are below: 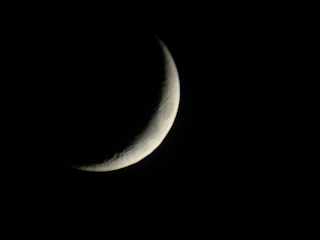 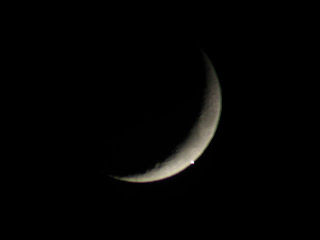 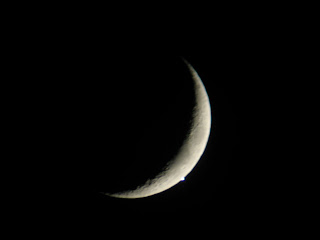 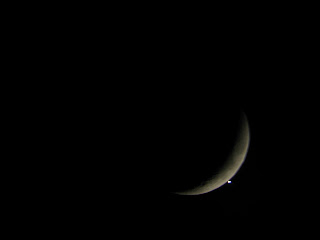